When Savan-Seno special economic zone (SEZ) was set up by the Laos government in 2003 it was expected to boost the economy and become a model for future schemes. But years later, the country’s first SEZ is still incomplete, and people who have long lived in the area are in conflict with developers and the government over compensation.

Lying just three kilometres from the Mekong, which acts as a national border with Thailand, the 234-hectare SEZ is connected to the “East-West Economic Corridor” – an initiative that links Myanmar, Laos, Thailand and Vietnam and includes a 1,450-km road, designed to create a new trade route through the Mekong region. Currently, a large proportion of trade, including three-quarters of China’s oil imports, depend on a single maritime choke point, the Straits of Malacca, patrolled by the US navy.

Around 70 enterprises, including from China, Thailand, Japan, Canada, the Netherlands and France, have registered in the Saven-Seno SEZ according to a Chinese government document. Construction plans there include an amusement park, offices, a duty free shop, a car assembly plant and a textile factory.

In the past two decades, the government of Laos has authorised foreign investors to establish 14 special economic zones (SEZs) in the country. So far, as part of the Belt and Road Initiative, 160 Chinese enterprises have invested US$1.5 billion in them, constituting 23% of total SEZ investment. 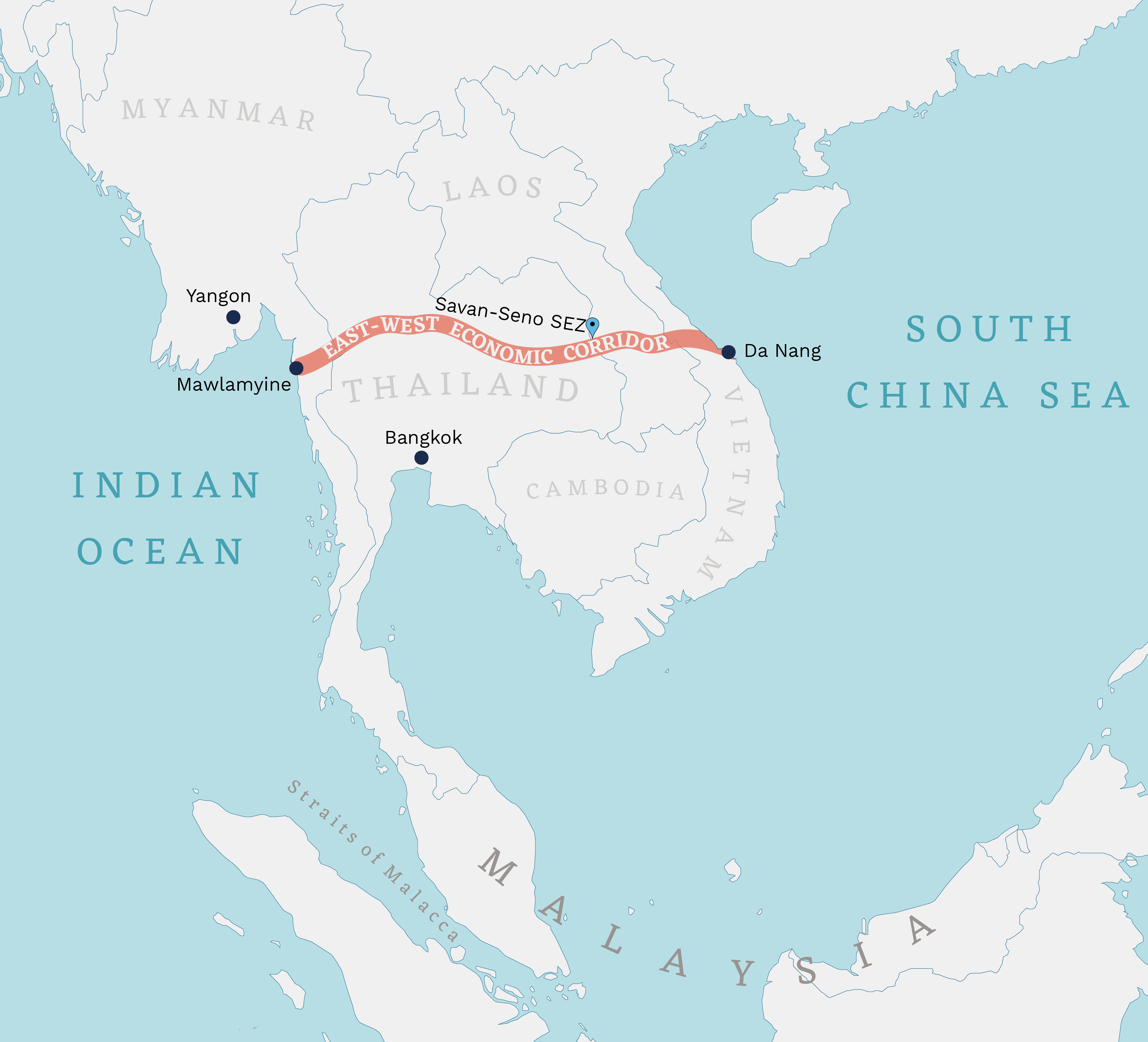 The Savan-Seno SEZ comprises various hubs for industry, commerce and logistics. In the area designated for residential development, known as Zone D, there are plans for homes, shopping malls, a public park, schools and a health centre.

Residents kept in the dark

I entered the SEZ in a car with slightly tinted windows. Inside, a few big advertisements for upcoming projects and land sales were dotted about. Most people living in Zone D were too wary to speak to China Dialogue. But near a dormitory for factory workers, I managed to talk with the owner of a small shop. She didn’t know when she would have to move to make way for development.

Another person I talked with was Ms Vanh (not her real name), a retired government official who had received notice that her land would be confiscated for construction. Though the SEZ was established 16 years ago, compensation issues for land and property remain unresolved.

“I haven’t received any compensation yet,” she said. “Company and state officials have paid several visits but have made no specific offers. If we are not offered land or money equal to the value of what we have now, we’ll refuse to move.”

Vanh is one of ten households determined to stay until they receive suitable compensation. She has connections and the knowledge and confidence necessary to navigate official channels. “If they don’t come back to talk to us with a clear and satisfactory offer, we are ready to take this issue to the parliament in Vientiane.”

Not all of the local residents share her conviction.

The community had made their living here for generations, farming and collecting non-timber forest products such as mushrooms, medicinal herbs and bamboo shoots. Before construction started in 2003, the land in Zone D was classified as conservation forest.

In 2015, Khanty Lokapone, an official from the Laos National Committee for the SEZ was quoted by the Vientiane Times: “Land located inside Zone D will not be compensated for, as the land within Zone D is a conservation forest area. The villagers are encroaching on a reservation forest area.”

Community members were aggrieved. They believed the land reclassification was a way for the state and project developers to evict them at low cost.

The government of Laos does not allow people meaningful access to information or consult them on development projects. Publicly available information is limited to the positive aspects of projects, with negative environmental and social impacts usually left out.

Worse, many development projects begin without the prior knowledge of the people affected. Projects are developed by the state and people have little choice but to accept them.

In 1986, the government declared a new economic policy to transform the national economy from reliance on trading natural resources, and to open up the country to foreign investment and cooperation. Since 2006, the government has made explicit reference to the idea of “turning land into capital”. Land leases and concessions have become an important government strategy for creating a market economy and stimulating economic growth.

But the expansion of large-scale land concessions has brought heavy social and environmental costs, including loss of land and livelihoods.

In the industrial area of the Savan-Seno SEZ, known as Zone C, an elderly man agreed to speak to me. “I have no confidence now. I don’t know when the state will come and take my land. Even though I have an official land use certificate, I will not be able to refuse the state officials when they come,” he said with a smile. It is the nature of Lao elders to smile even when sad.

Landholding in Laos is insecure as a result of ambiguously worded laws and policies and because people still lack documents confirming their ownership and rights. At the same time, people lack access to information about the law. Therefore, when the government declares that people must move out of a project area, they generally have no alternative but to do so.

On top of land loss and compensation problems, the Savan-Seno SEZ presents local residents with a number of social problems, including disputes over low wages and a flourishing of drugs and prostitution. Blocks of hotels, karaoke bars and drinking establishments line the road to the casino, which is adjacent to Savannakhet University.

Development projects such as SEZs are under the exclusive control of private sector actors and the government. Article 90(2) of the Law on the Promotion of Investment 2016 clearly states: “It is prohibited for anyone to undertake any form of impediment to the investment promotion in the Lao PDR.” Laws that could protect local people are like tigers without teeth. They look impressive but are not implemented transparently or enforced properly.

A Lao public interest lawyer who wished to remain anonymous said: “There are big loopholes in laws related to SEZ development in Laos, especially in their implementation… Laws to protect citizens’ rights are very weak, both in principle and enforcement. It is the villagers who are the victims of investments like SEZs. The Laos government chooses to protect investors over its own citizens. There has been no sincere action from the government to resolve disputes and problems resulting from SEZs.”

Moreover, SEZ developments lack comprehensive environmental and social impact assessments. No such assessment is even available for the Savan-Seno SEZ.

On my way out of the SEZ, I visited the casino of the Savan Legend Resort which is run by a company called Macau Legend Development. Entering, I felt the sounds and lights pull me into a place with no sun, moon or semblance of the world outside. Two men inspected my bag and warned me photography was strictly forbidden. Looking around at the customers, I was surprised that the majority were fellow Lao citizens – university students in uniform, tourists from other provinces and market vendors dropping by on their way home.

A group of Thai tourists entered, followed by some elderly Chinese who were escorted to private rooms. Lao gamblers gravitated towards the simpler machines, where cartoon characters made gaming cute and easy.

Without meaningful public participation and proper laws and enforcement to protect the rights of citizens, SEZs may deepen inequality in Laos rather than create opportunities for local people.