Editor’s note: This article is a joint production with The Isaan Record

The future of a potash mine planned for north-eastern Thailand is mired in uncertainty as villagers put up fierce opposition, fuelled by concerns about their livelihoods, health and environment. 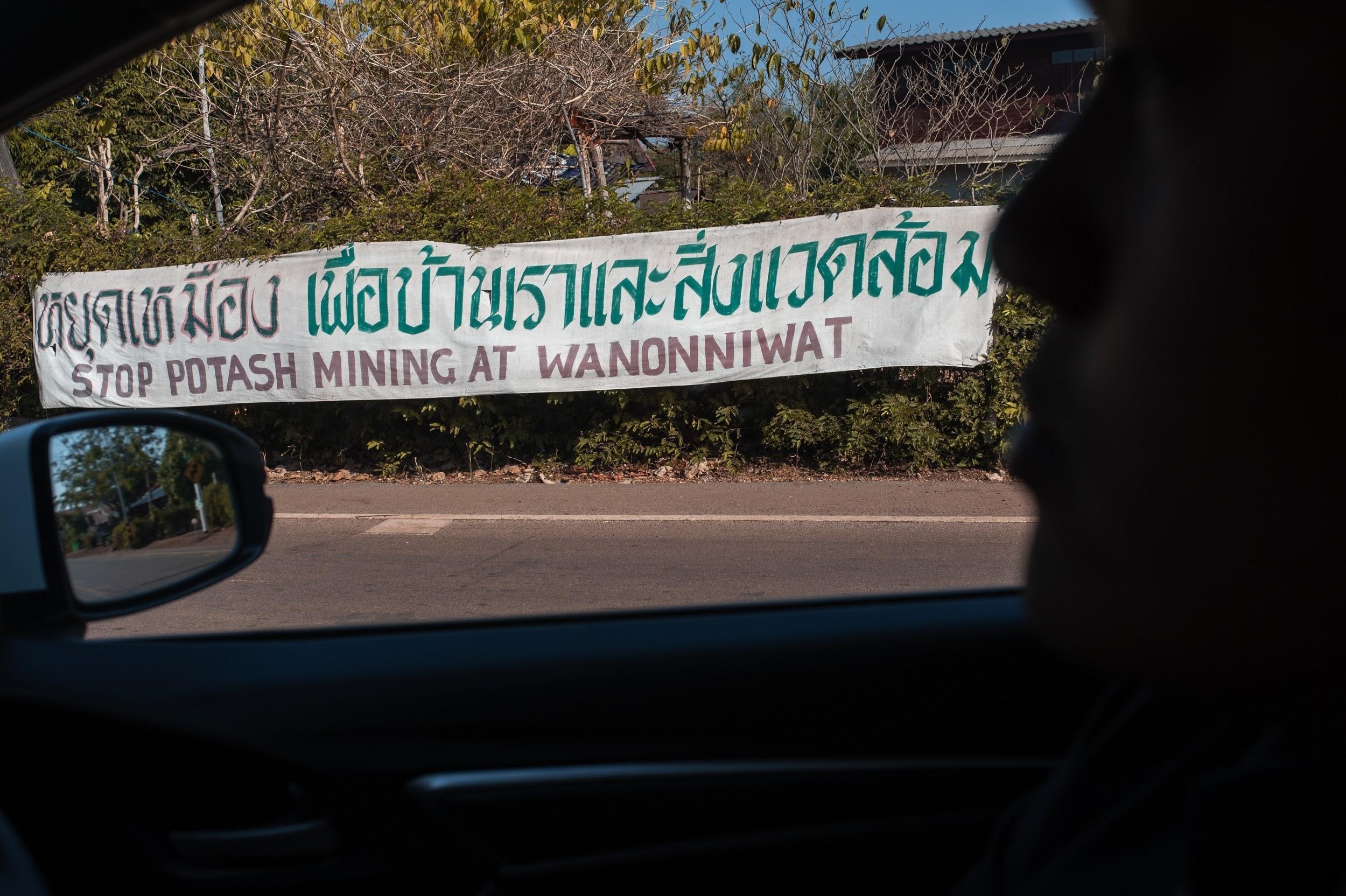 Potash: The treasure of the north-east

China owes its expansion of agricultural production in part to cheap fertilisers. The country is the world’s largest consumer of potash, a potassium-rich salt that boosts yields and enhances the water retention and disease resistance of crops.

Chinese farmers depend on potash imports mainly from Canada, Russia and Belarus. But as prices of the mineral remain high – they surged almost 25% in the past year – the country has pushed to develop new and cheaper sources.

It has turned its eyes to the rich potash reserves in Thailand’s north-east.

The region, which has long mined salt, sits on two major potash deposits, known as the Khorat Basin and the Sakon Nakhon Basin. The resource was discovered in the 1970s but left largely unexploited because of strong local opposition, environmental concerns and legal restrictions. 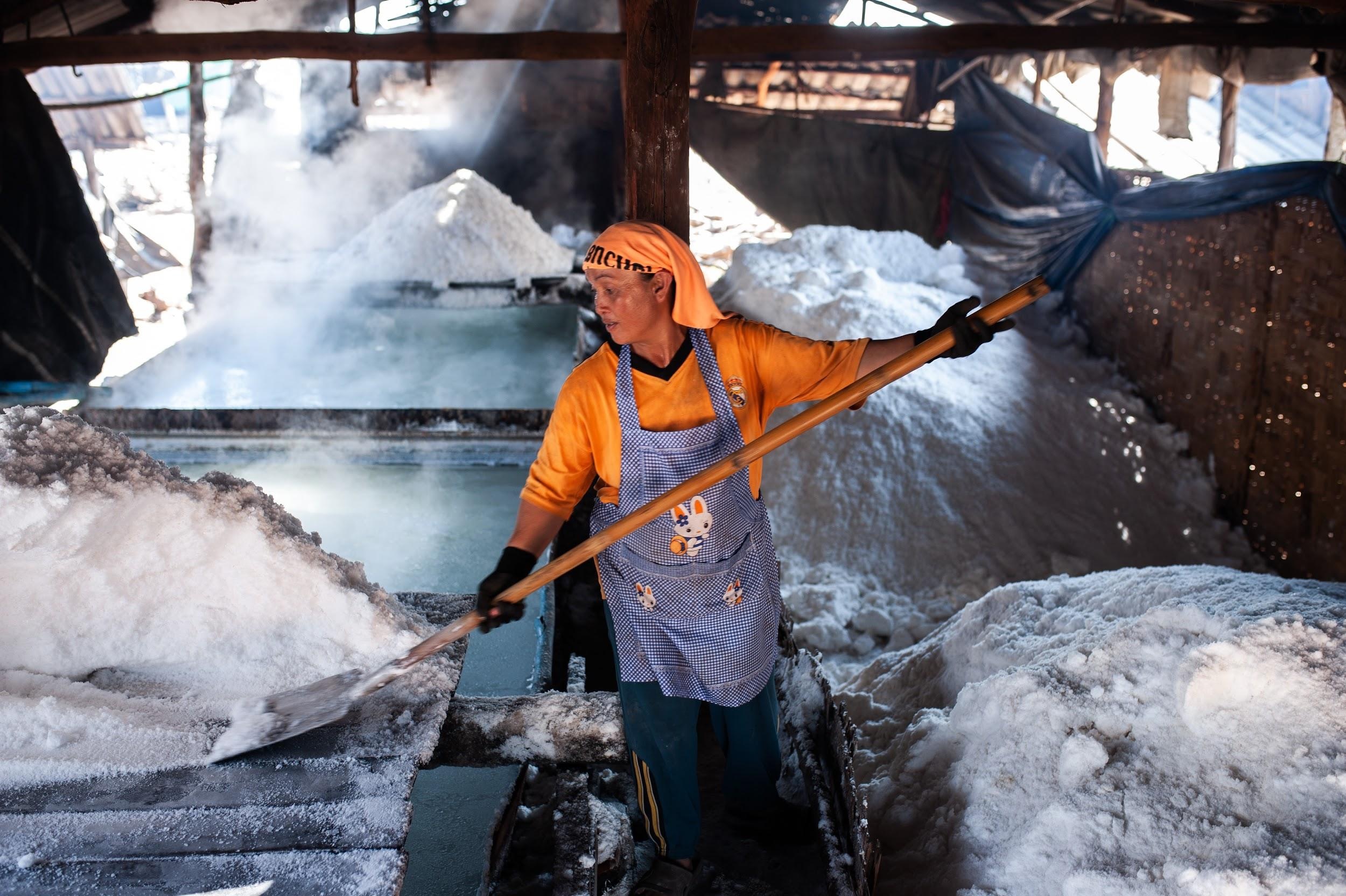 Boiling water to produce salt in a factory in Kut Ruea village, Sakon Nakhon. Workers are paid according to the amount of salt they produce, usually about 350 baht (US$11) per day. (Image: Visarut Sankham)

After a military junta gained power in a coup in 2014, it announced plans to increase mineral resource extraction in Thailand to boost the economy.

“Thailand has huge deposits of potash ore, estimated at 400 billion tonnes, which have yet to be commercially exploited. This government has already begun to support potash mining,” Deputy Prime Minister Pridiyathorn Devakula told a business conference in 2015.

Besides the profits of the lucrative business, the Thai government hopes to reduce its own dependency on imports. The country imports about 700,000 tonnes of potash per year. 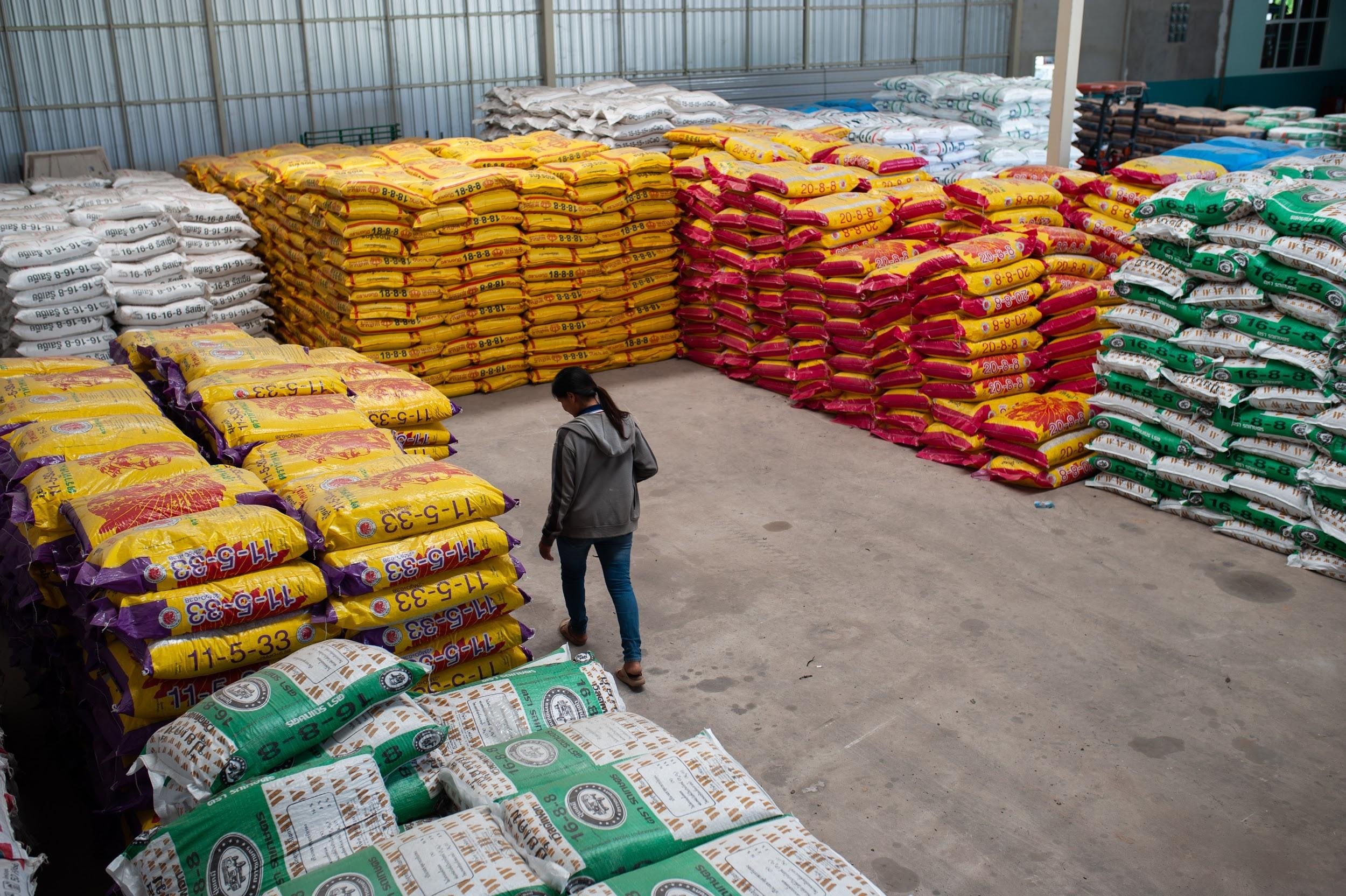 The government argues that domestic mining will free the country from its reliance on imported potash, lower costs and boost agricultural outputs. (Image: Visarut Sankham)

“China and Thailand are both looking for new potash supply sources to cut import and production costs,” said Apichat Sayasiyot, China Ming Ta’s manager. “Thailand has potash but needs the help of the Chinese to extract it. It’s a Thai-Chinese collaboration that will benefit both parties.”

In the rural district of Wanon Niwat in Sakon Nakhon province, people responded first with fear and then anger to the news of the planned potash mine. Local officials had failed to inform the residents of 82 villages that their homes were now part of a mining area.

“The company had started exploring at two drilling sites but people in the community were left without any information about the project,” said Mali Saengbunsiri, a 50-year-old farmer, grandmother of four, and leader of the local anti-mining group. 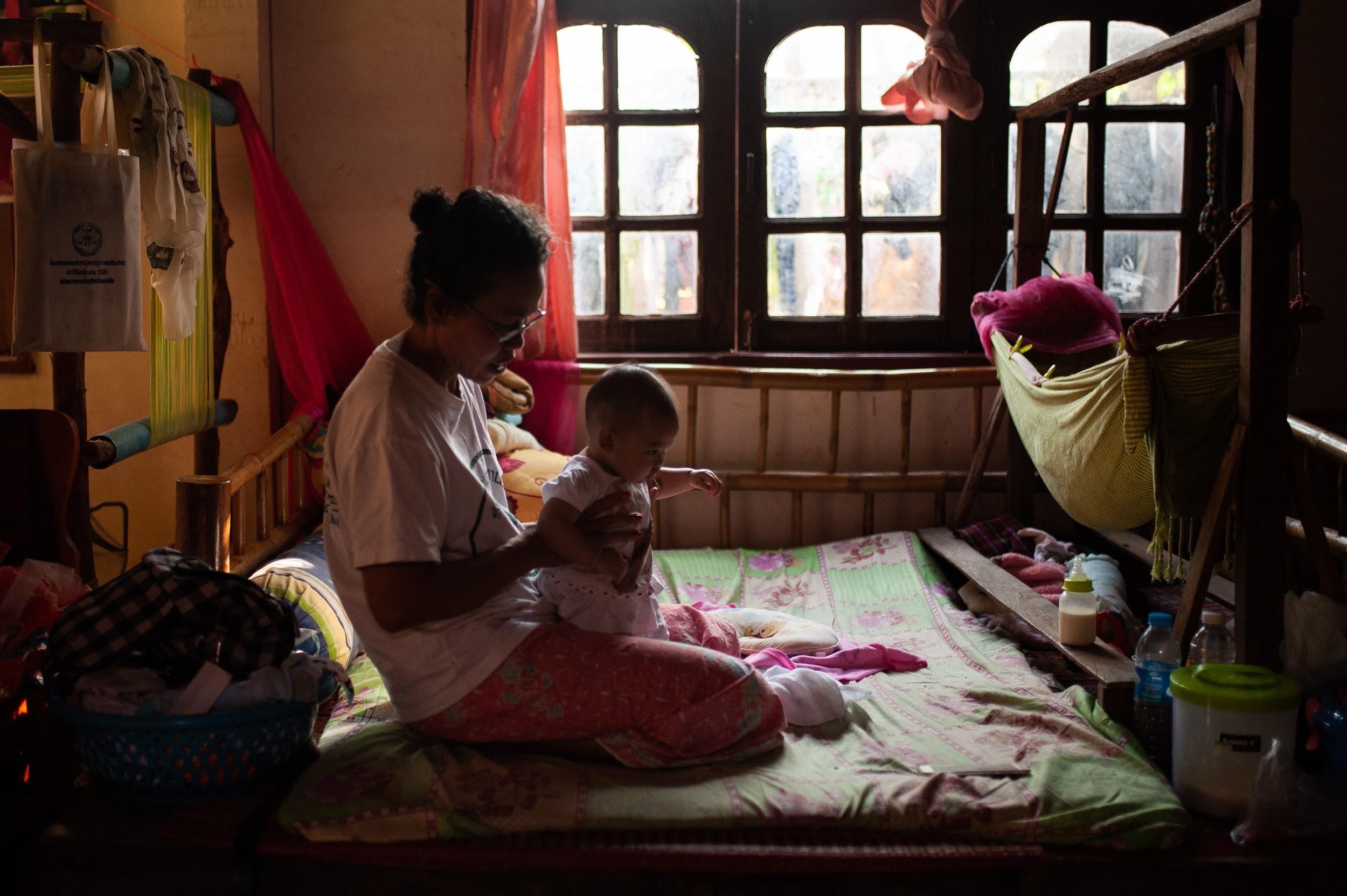 Only in July last year, three years after the project was approved, did the local government officially inform residents about the mining plans.

Farming communities in Wanon Niwat depend on the area’s delicate ecosystem of fertile soils, rivers, lakes and wetlands to provide them with food and other resources.

“Just imagine the impact of a huge industrial mining project here,” said Mali. “The scary thing about salt is that it is capable of damaging just about everything.” 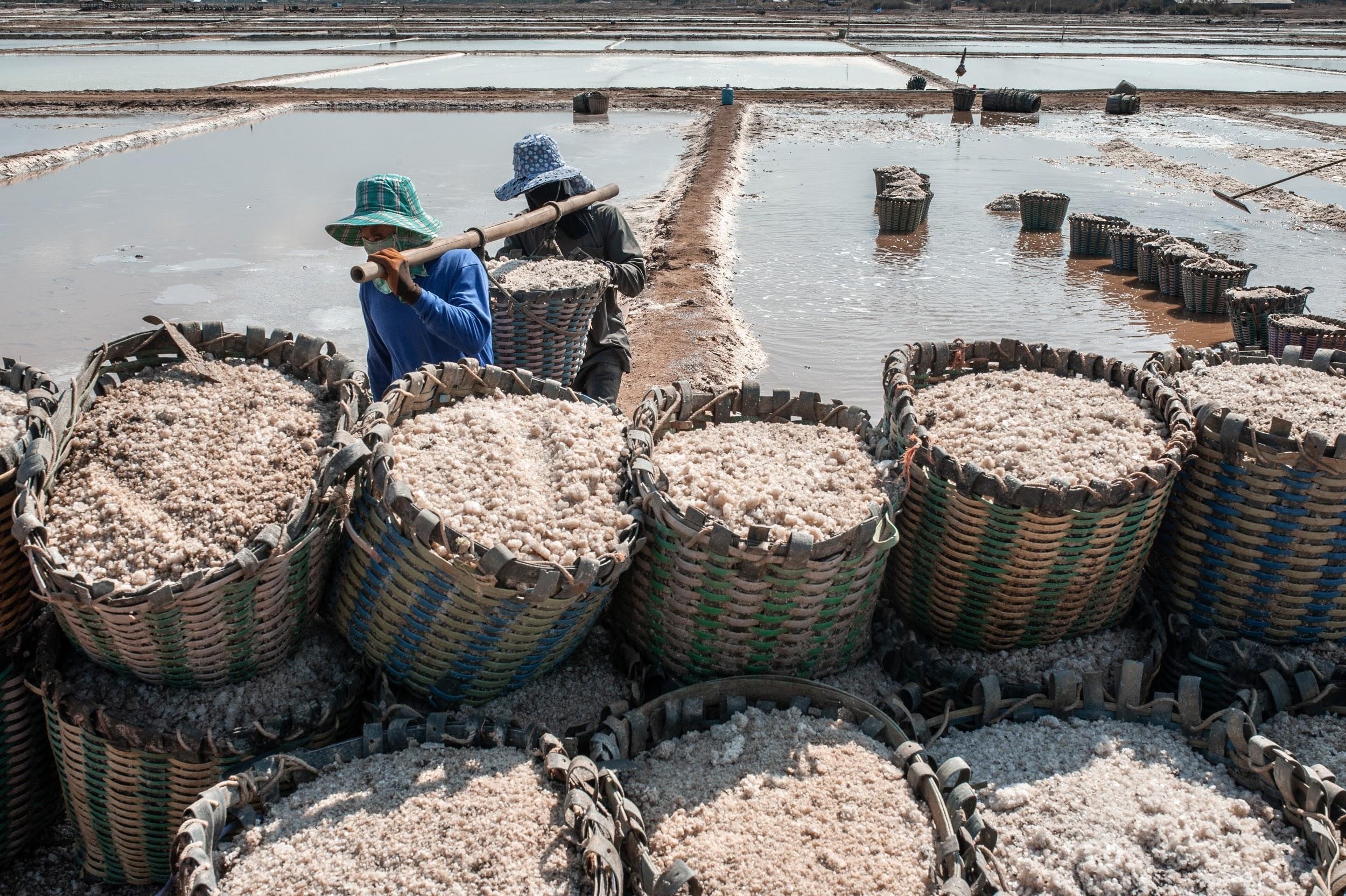 The salt farm near Non Sabaeng village, Sakon Nakhon, produces unrefined salt for industry. Salt-rich groundwater is pumped up for the sun to evaporate and leave behind the mineral. (Image: Visarut Sankham)

Potash mining produces large amounts of salt as a by-product. In a region that already suffers from salt-affected soils, locals fear the project will turn their fields barren.

If rain washes the salt into rivers, lakes and wetlands, few freshwater organisms can survive. It could harm fishing in the district’s Huay Thong lake, which is also the main water source for thousands of people. 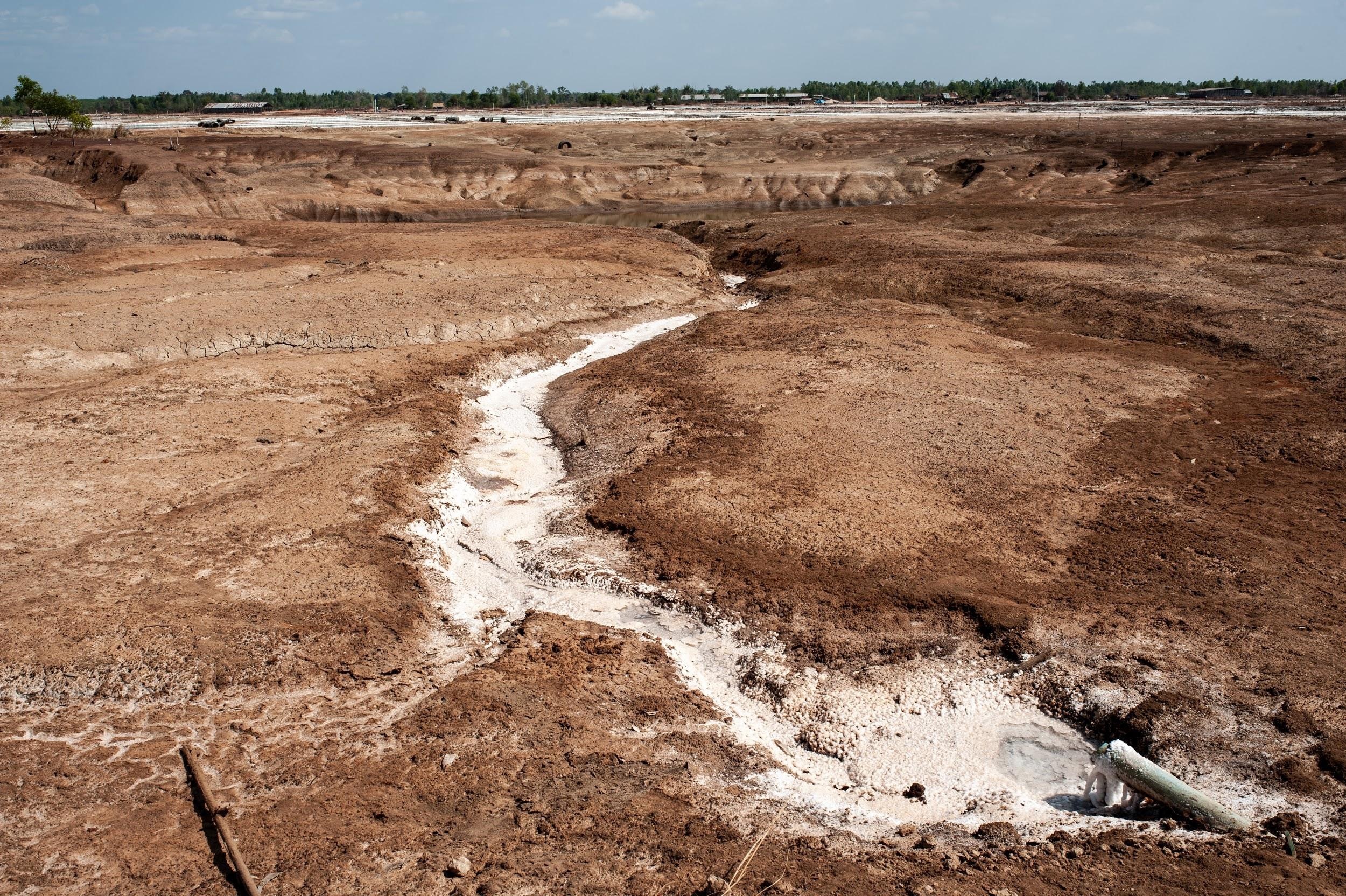 Thirty years ago, a rock salt operation in Borabue district in the north-eastern province of Maha Sarakham caused an environmental disaster, poisoning land and water with salt. The government eventually banned salt production in the area and ordered restoration efforts that are ongoing.

Inhaling large amounts of salt dust can cause respiratory diseases, according to Sompon Phengkham from the Community-led Impact Assessment Institute. The dust from the mine may also contain harmful traces of heavy metals. 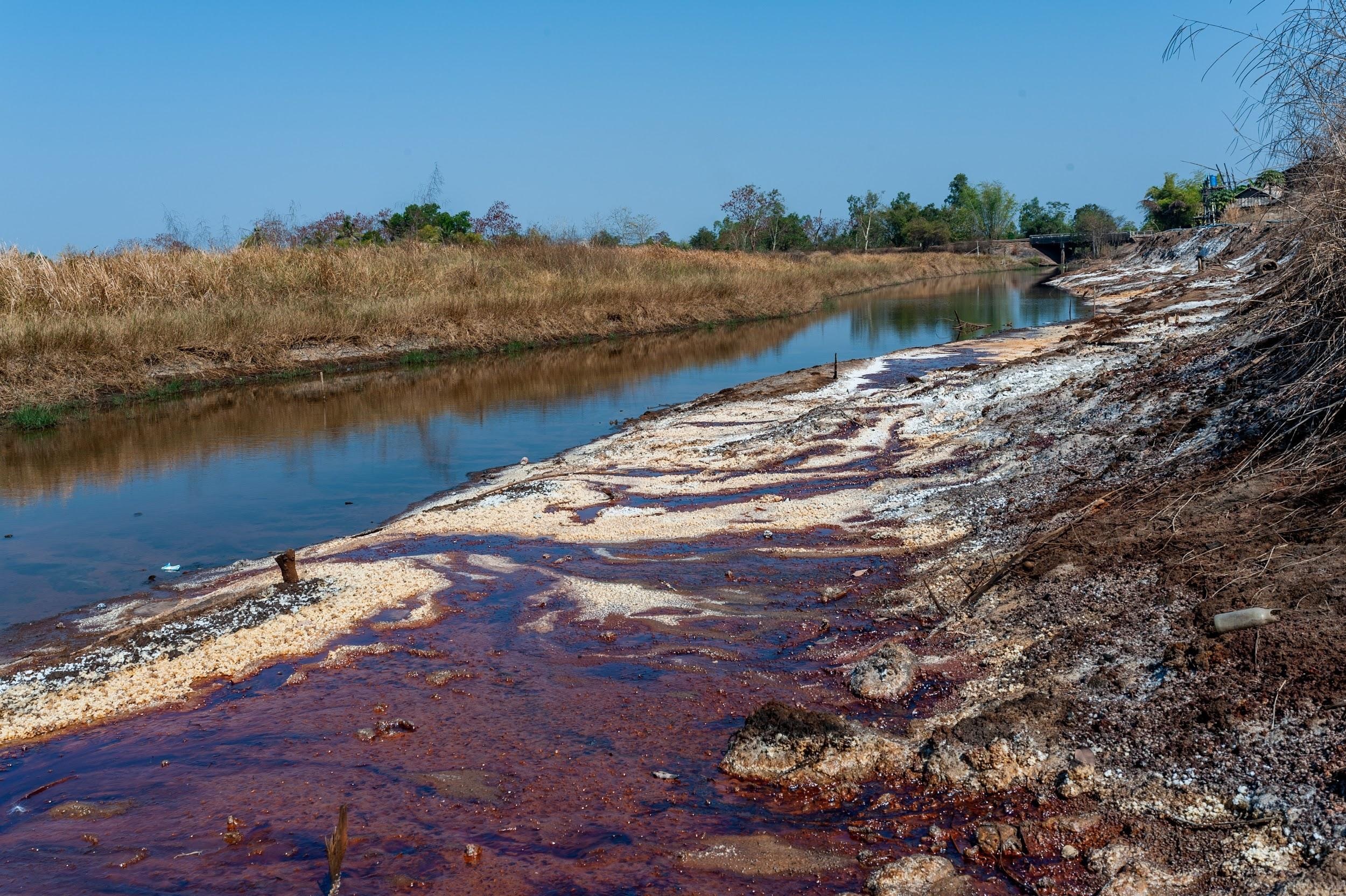 Waste water from the salt factory is released into an open trench, to protect the surrounding areas from the salty runoff. But several water sources around Non Sabaeng village are contaminated. (Image: Visarut Sankham)

“We don’t know how the company intends to protect us from the dust and salty water coming from the salt mountain in the mine,” Mali said, referring to the proposed tailings pile. “How effective is it going to be?”

Locals and experts are also concerned that large-scale potash mining will create dangerous sinkholes. A rock salt operation in a nearby district resulted in a pit 15 metres deep and the size of a football field. 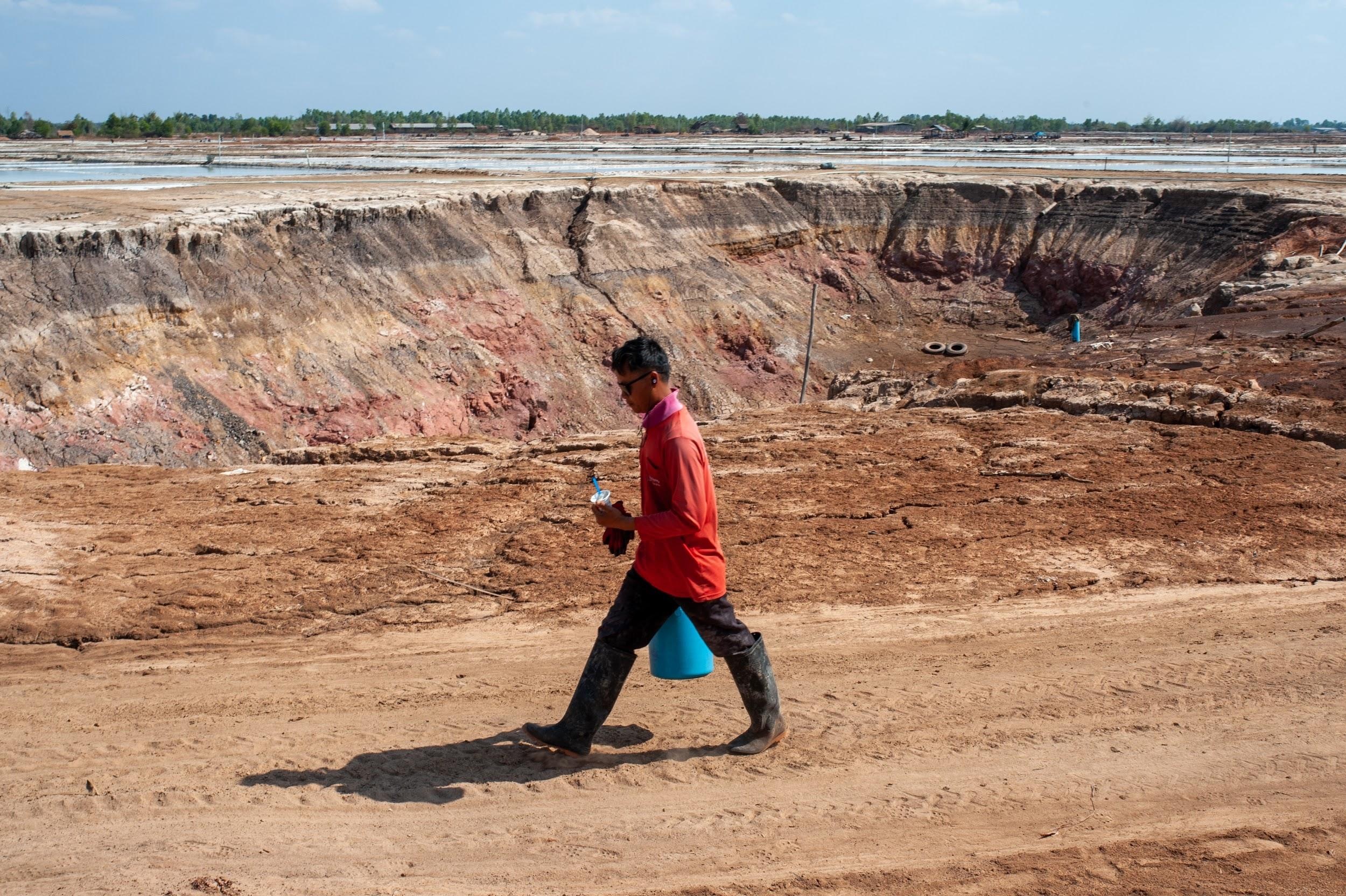 A small hole in the ground next to the Non Sabaeng salt farm grew into a 15-metre deep pit. Sinkholes are common in areas of salt production where groundwater is pumped up to the surface. (Image: Visarut Sankham)

China Ming Ta seeks to reassure local residents of its safety plans to alleviate these environmental and health risks. “We will take measures to return the salt piles into the mining tunnels in order to stabilise the soil and prevent the release of salt dust and salt water,” company manager Apichat told the Isaan Record.

But the mining company’s assurances came too late to allay the fears of the people of Wanon Niwat. Fuelled by the sense that fateful decisions had been made without their input, villagers in the district organised an anti-mining group in 2016.

The middle-aged leaders of the protests, including Mali Saengbunsiri, have teamed up with activists, academics and non-governmental organisations to oppose the potash mine. They put up banners, organised public forums and submitted petitions to officials and the company to stop the project.

The company plans to set up 60 drilling sites in order to evaluate the quality of the potash before establishing the mine. In February last year, the group escalated their demonstrations and blocked the road to the site of the fourth borehole, effectively stopping the company from moving drilling equipment into the area. Protesters also blocked the site of the planned third borehole. This leaves the company with only two operational drilling sites. 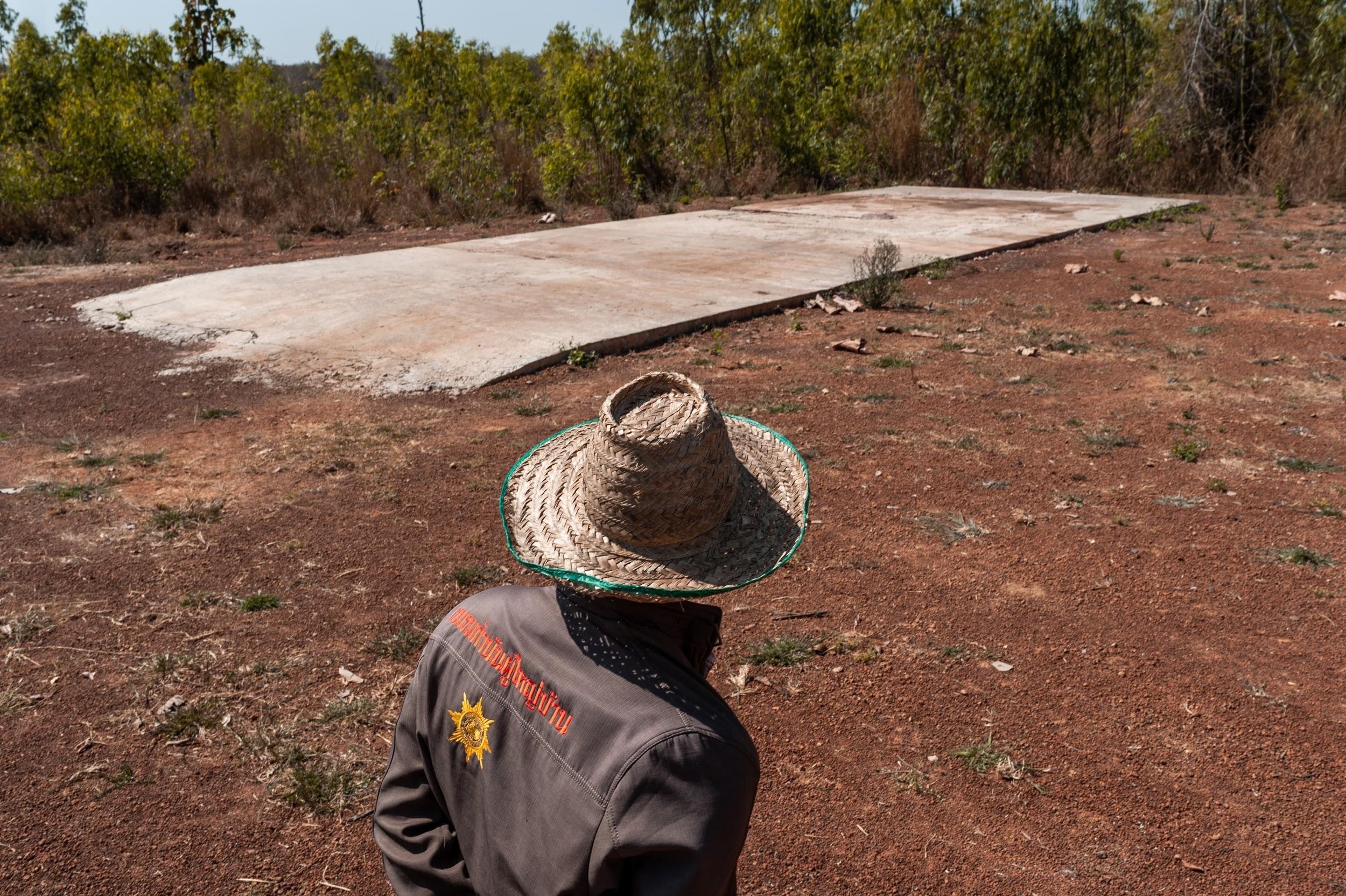 A company representative stands in front of the third borehole in Khon Sawan sub-district, part of the potash surveying mission. The land belongs to a local politician. (Image: Visarut Sankham)

“We are suing because [our operation] was illegally blocked causing financial damage to the company,” said Apichat. “If we don’t stay within the law, nobody can protect us, so it became necessary to file a legal complaint.”

China Ming Ta claimed that each blocking of a drilling site cost it five million baht (about US$157,500).

China Ming Ta accused the villagers of illegal obstruction of their mining site, defamation and a violation of the Computer Crimes Act for demanding an official investigation into the mining project on social media. The company seeks total compensation of 34 million baht.

But Sakkaphon Chaisaengrat, the protesters’ lawyer, argues that the villagers acted justly: “The law allows people to publicly exercise their community’s rights to protect resources, culture and local ways of life.”

Back in August 2017, activists and experts in the north-east argued that local conflicts over natural resource management would likely grow more severe after the Thai government enacted new legislation in favour of industry and mining.

Drafted and approved by the military junta’s appointed lawmakers, the new minerals act fast-tracked the approval process of mining concessions. The consideration period for permits was more than halved from 310 days to between 100 and 150.

Lertsak Kumkongsak, a well-known environmental activist, said that the bill boosts the decision-making power of officials by setting up “mineral committees” that oversee mining operations in each province. The committees are mostly made up of members from the Ministry of Industry and representatives of mining companies.

At the same time, the bill curbs people’s representation and the participation of communities in the management of natural resources, argued Lertsak.

Chainarong Setchua, an environmental expert at Maha Sarakham University, believes that the junta overhauled mining legislation with an eye on the mining industry of China and other foreign countries. It aimed to tear down regulatory barriers of environmental protection and public participation, he believes, to pave the way for commercial exploitation of Thailand’s mineral resources.

But the junta miscalculated the level of resistance the potash mining project would incite among the people of Wanon Niwat and elsewhere.

“We don’t want industry here!” said Mali. “We won’t let this area, abundant in natural resources, be turned into an industrial zone.”

In fact, across the region, local groups have been organising against mining projects, including in the provinces of Nakhon Ratchasima, Chaiyaphum, Loei and Udon Thani.

Natural resource management experts argue that many of the mining projects in the region were ill-conceived.

Santiparp Siriwattanaphaiboon, a lecturer at Udon Thani Rajabhat University, believes that setting up mines next to longstanding communities and nearby farms is a recipe for conflict.

“Mines in Canada are not set up in the vicinity of communities,” he said. “This is very different from Thailand, where mines are put into people’s backyards.”