China scored some notable triumphs in its relations with Latin America and the Caribbean in 2018. First signalled by Trinidad and Tobago in May, countries throughout the region embraced China’s flagship global trade and infrastructure programme, the Belt and Road Initiative (BRI). By the end of the year, Bolivia, Antigua and Barbuda, Guyana, Uruguay, Costa Rica, Venezuela, Chile and Ecuador had been added to the tally of those signing BRI agreements, along with El Salvador, which was first obliged to shift its diplomatic recognition from Taiwan to the People’s Republic. Each new subscriber to the initiative, large or small, was warmly welcomed aboard what Beijing presented as the investment and development project that would define Latin America’s future.

It is a transformation of relations the more remarkable for the fact that, for the first fifty years of its existence, the People’s Republic of China (PRC) took little interest in Latin America, a region the US had defined in the Monroe Doctrine as its exclusive area of interest. The indifference was mutual. In 1960, the new revolutionary government in Cuba established diplomatic relations with China, but with the exception of Chile (1970), most other Latin American governments did not recognise the PRC until after President Nixon’s 1972 visit to Beijing signalled that the world’s alliances were changing. Argentina and Mexico recognised the PRC that year, followed by Brazil in 1974 and Bolivia in 1985.

Even then, engagement remained sparse, despite Deng Xiaoping’s new policy of reform and opening, launched in earnest in the early 1990s, which helped China to ride a wave of globalisation that triggered the world’s biggest and fastest industrial revolution. China’s expanding industries were hungry for Latin America’s energy and raw materials, but it was not until 2001 that a Chinese head of state – the then president Hu Jintao – came to the region, visiting Brazil, Argentina, Chile and Cuba.

Since that year, relations between Latin America and China have been transformed. By 2010, China had displaced the US to become South America’s largest trade partner, as well as the region’s biggest investor. Today, a series of eye-catching announcements on infrastructure mega-projects has embedded Latin America in China’s vision of the global future, even if many have stalled and seem unlikely to come to fruition.

Nor has the effort been confined to trade and development: keen to build a positive image in the region, China has also invested heavily both in Spanish and Portuguese language versions of its own state and Party media, and in cultivating local partners. The story that China tells is about win-win deals and mutual benefit.

There is growing evidence in Washington that the US will increasingly aim to force a choice on its partners, between the US and China.

Reality, inevitably, is more complex. Whilst many governments are enthusiastic about the promised investment, not all have committed to the BRI. Argentina neglected to formally sign up, despite a bilateral meeting between President Xi and President Macri on the sidelines of November’s G20 summit in Buenos Aires. In neighbouring Brazil, the newly elected president Bolsonaro has a track record of anti-Chinese rhetoric, and the continuing crisis in Venezuela has lent weight to warnings from a series of US officials about the dangers of China’s influence and what they call ‘debt-trap diplomacy’. There is growing evidence in Washington that the US will increasingly aim to force a choice on its partners, between the US and China.

China, meanwhile, pursues its own diplomatic efforts: the Second Ministerial Meeting of the Forum of China and the Community of Latin American and Caribbean States (CELAC) was held in Santiago, Chile, in January. CELAC, the regional bloc formed in Venezuela in 2011, does not include the US or Canada. Ministers from 31 Latin American and Caribbean countries and the heads of four regional organisations and multilateral institutions, including the United Nations Economic Commission for Latin America and the Caribbean, heard Chinese foreign minister Wang Yi insist on the benefits that BRI would bring. In an implicit contrast to President Trump’s overt hostility to everything south of the US-Mexico border, and his “America First” protectionism, Wang Yi promised that, “China will always stay committed to the path of peaceful development and the win-win strategy of opening up and stands ready to share development dividends with all countries.”

Whether that promise is fulfilled or not, the transformation of relations with China has far-reaching implications for the region, its people, its resources, its role in climate mitigation, its future growth and the distribution of the benefits of that growth. Many critical questions remain about the nature and impact of that engagement: are China’s investments contributing to sustainable development, or will they lead to ‘re-primarisation’ of struggling economies, killing local industries and accelerating the environmental, social and climate crises now underway? Are China’s loans structured sustainably, or will its ambitious infrastructure exports trigger another debt crisis in the region? How will China’s own economic troubles – its internal debt levels and the impacts of US trade hostility – affect its capacity to pursue its ambitions in Latin America? Will China’s appetite for soy continue to drive the destruction of South America’s forests, and its appetite for fish empty the region’s seas? And how will Latin American civil society find a way to engage with Chinese actors, given the barriers of language and custom, and the distance that divides them?

China’s reach is already being tested and the benefits of some of the relationships questioned as the region faces a new round of uncertainties. The US-China trade war has had knock-on effects on South America’s agribusiness; in Mexico, newly-inaugurated resource nationalist Andrés Manuel López Obrador, or AMLO, has challenged the Institutional Revolutionary Party (PRI)'s kleptocracy and in Nicaragua, rural anti-canal protesters threw their weight behind the national anti-government uprising. In Argentina, meanwhile, critics called into question its agro-export model as it, too, faced an economic crisis. 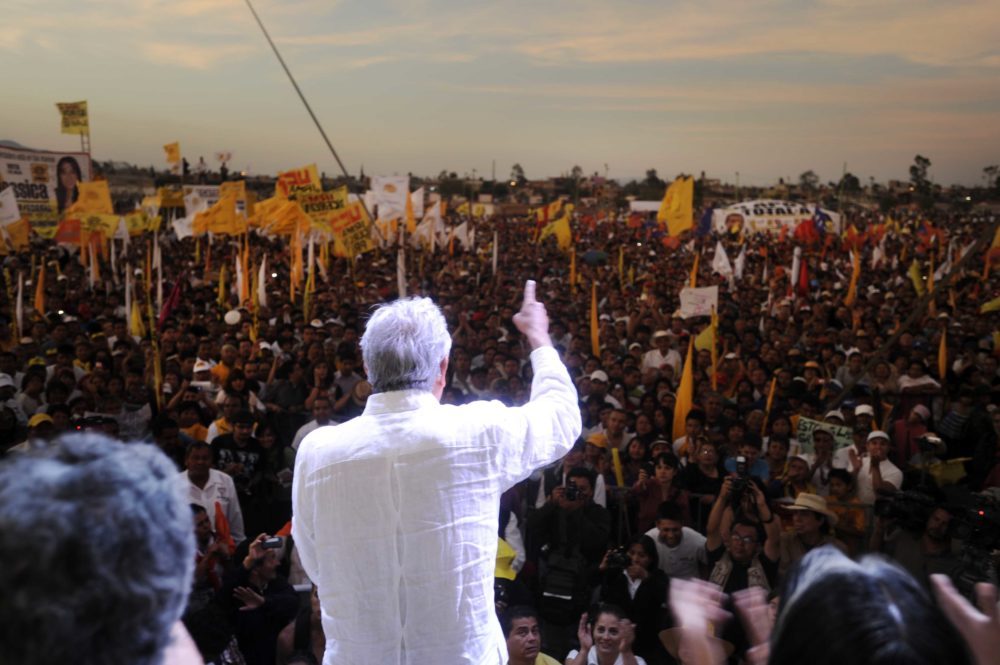 In Colombia, an environmental crisis in May caught the headlines as the part-Chinese financed Hidroituango dam collapsed, putting environmental concerns on the agenda for the first time in a generation as the country prepared for a June presidential election. In Peru, one of the countries in the region with the longest history of engagement with China, there are continuing conflicts over Chinese management in the mining sector.

This is a complex and multifaceted set of relationships in a region rich in diversity. It is critical that the stories of those caught up in this grand transformation are told, that official propaganda and the claims of powerful actors are interrogated, and the voices of those affected are heard. Diálogo Chino is dedicated to reporting, analysing and covering these vital issues on its dynamic, trilingual (English, Spanish and Portuguese) website.

In the coming year, we shall track the progress of the Acuerdo de Escazú, which seeks to protect environmental defenders, but which must now be endorsed by national congresses. We’ll assess the impact of the new relationship with China on the presidential elections in El Salvador in February 2019 and if there will be pressure to lift the country’s 2017 blanket ban on metal mining. At the end of the year, Argentinians pass judgement on a presidency that has found its policy choices limited by tough conditions imposed by Chinese loans agreed under a previous administration. We shall report from the rainforests and the oceans on the ecological impacts of the China relationship and will analyse the underreported climate, social and economic impacts of these rapidly evolving partnerships.

In a recent speech marking the 40th anniversary of the tentative introduction of reforms that enabled China’s political and economic integration with the rest of world, President Xi praised his country’s success in increasing its cultural soft power and international influence. Media worldwide now face a challenge in understanding and telling the story of China’s rise objectively. Our reporting remains independent, non-partisan and free of propaganda. Audiences in Latin America and around the world demand, and deserve, reliable and accurate information on the impacts of the region’s deepening engagement with China. Diálogo Chino is uniquely placed to serve them.

This article is republished from Diálogo Chino.