China's ivory ban means carvings have disappeared from view at Beijing’s liveliest antique market. China is the world’s biggest importer and consumer of ivory. It imposed a comprehensive ban on trade in ivory items at the start of January to halt demand that is driving rapacious poaching. The law is part of internationally co-ordinated measures to protect Africa’s elephants from extinction.

“China no longer allows trading in ivory goods,” traders said on a visit to the antique market in March. Some who previously specialised in ivory have switched to selling still-legal mammoth ivory carvings; others have shut down.

The State Forestry Administration, which has responsibilities to prevent trade in endangered species, has dispatched inspection teams across China, to oversee investigations and crackdown on ivory trading.

Sales have been halted at 170 ivory shops and workshops. Online retailer Taobao has delisted ivory goods, and is blocking search terms. Anyone searching for ivory on China’s most popular search engine Baidu gets a cautionary reminder of the “comprehensive ban on the trade in ivory.”

Ivory carvers have also been hit. Beijing Ivory Carving Workshop’s stocks have been sealed, its chairman Xiao Guangyi told chinadialogue. “We still don’t know what to do with that stock. We’re waiting for follow-up policy from the government,” he said, declining to specify how much ivory is held.

Before the ban, there were 34 legal and publicly visible ivory carving firms and 143 ivory retailers in China. 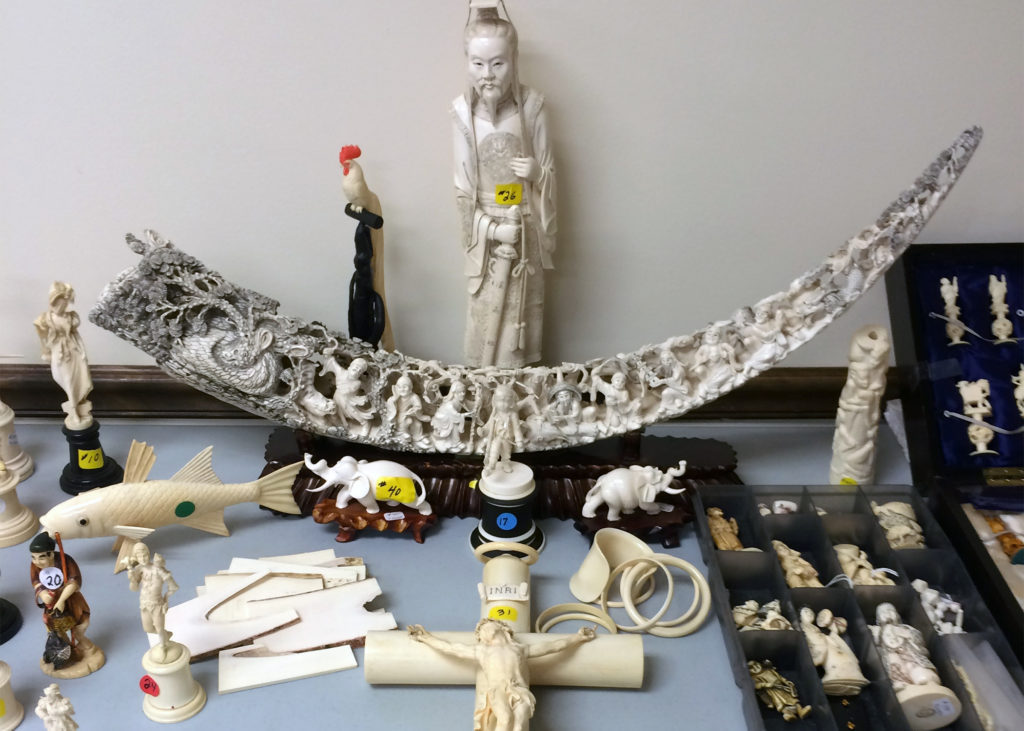 More than half of ivory traders are hoping for government assistance to dispose of stock, though some intend to hold onto their ivory in the event that the market eventually re-opens, according to a survey by the Worldwide Fund for Nature and wildlife trade monitoring network TRAFFIC.

Central government should purchase existing stocks and donate them to museums, according to Zhang Li, a Beijing Normal University professor and elephant conservation expert, who put the cost at around US$84 million to buy up China’s legal raw ivory stockpiles at 2016 prices, and US$500 million to purchase all ivory goods. Prices have since fallen.

His proposal touches on ivory’s role as a traditional art form, stretching back more than two millennia in China; it is the longstanding cultural kudos of often intricately delicate objects that makes ivory desirable, and illegal trading hard to stamp out.

The State Council listed ivory carving as part of China’s intangible cultural heritage in 2006; the China National Arts and Crafts Association has a dedicated ivory carving commission, representing specialists in this delicate and complex craft. However, the workforce is aging, and the ban has prompted most remaining carvers to switch to mammoth ivory.

Smuggling on the rise

Despite these domestic enforcement successes, ivory smuggling seems to be increasing.

Customs officials confiscated 61 pieces of ivory weighing 2.26 kilogrammes at Guangzhou’s Baiyun Airport on March 17 – the fifth attempt at smuggling uncovered in the space of a few days, according to the Chinese customs authority’s official microblog.

They halted 56 attempts to smuggle ivory in the first three months of 2018, an increase of more than 140% on the same period of 2017. Ivory was found in food tins, vacuum cups, kettles, and on smuggler’s bodies.

Smugglers have been caught all over China since the ban – from affluent east coast cities like Guangzhou to poorer and more inland ones like Zhengzhou in north China, and Kunming in the south-west. Officials in Shenyang found ivory goods being shipped via the postal system for the first time, intercepting two items sent from the UK.

There is an increase in individuals bringing ivory pieces back into the country, according to Xu Ling, senior project manager with TRAFFIC China, who wants heightened publicity of seizures, and prosecutions to warn and deter others.

Chinese travellers abroad now get text messages, warning “Please do not buy or illegally carry wildlife products such as ivory in or out of China.” Even so, “They might not know the potential consequences,” said Xu.

Customs officers confiscate all ivory, regardless of value, under the new law, and smuggling rare animal products worth 200,000 yuan (US$37,700) or above carries a minimum five-year jail term. 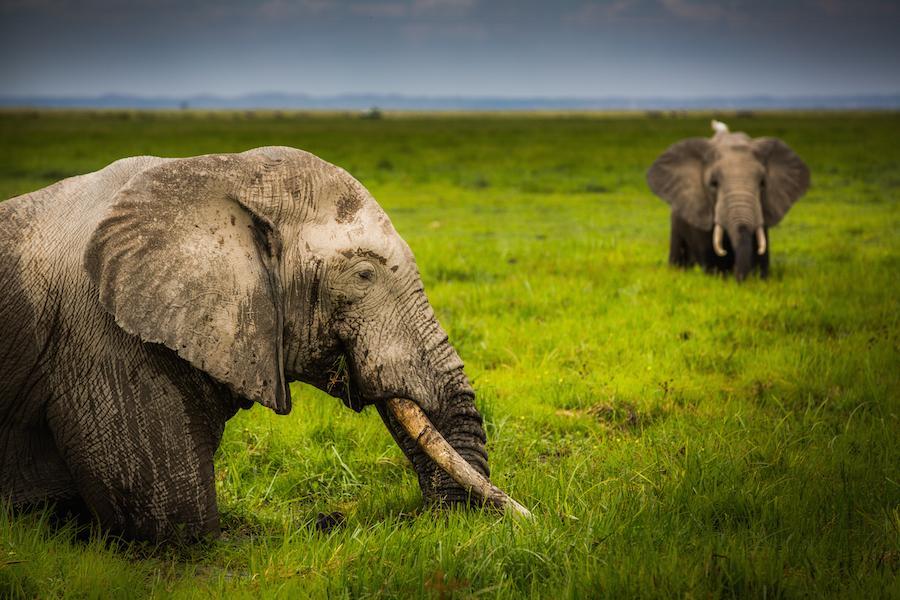 The appeal of ivory was clear in a 2013 survey of 600 middle- and high-income Chinese done for National Geographic and the Institut Francais d’opinion publique: 84% planned to buy ivory goods.

Research commissioned by WWF and TRAFFIC ahead of January 1 found 45% of respondents (913 of 2027 people) in 15 Chinese cities had bought ivory at some time. Half said they would not buy again. However, 19% were described as “diehard buyers”.

Overseas travel was still seen as an opportunity to buy ivory.

“To stop that diehard 19% it is necessary to break every link in the illegal supply chain,” said Xu.

Ivory markets in countries such as Japan, Vietnam, Cambodia, Laos, Myanmar, as well as in the African source nations with elephant populations, remain active and are still targeting Chinese tourists, said Xu.

An undercover investigation by the Wildlife Justice Commission found the number of ivory carvers in Vietnam has risen, though February 2017 black market ivory prices in the capital, Hanoi, had dipped 50% on two years earlier.

Chinese officials and conservation NGOs agree that persuading other countries to ban all ivory sales has become a vital next step.

Wang Weisheng, deputy head of the wildlife conservation and nature reserve office at the State Forestry Administration, said he is worried that legal trade in ivory elsewhere will undercut China’s crackdown on illegal ivory trading at home and make law enforcement more challenging.

“We hope these countries will ban the ivory trade as strictly as China has,” said Xu. 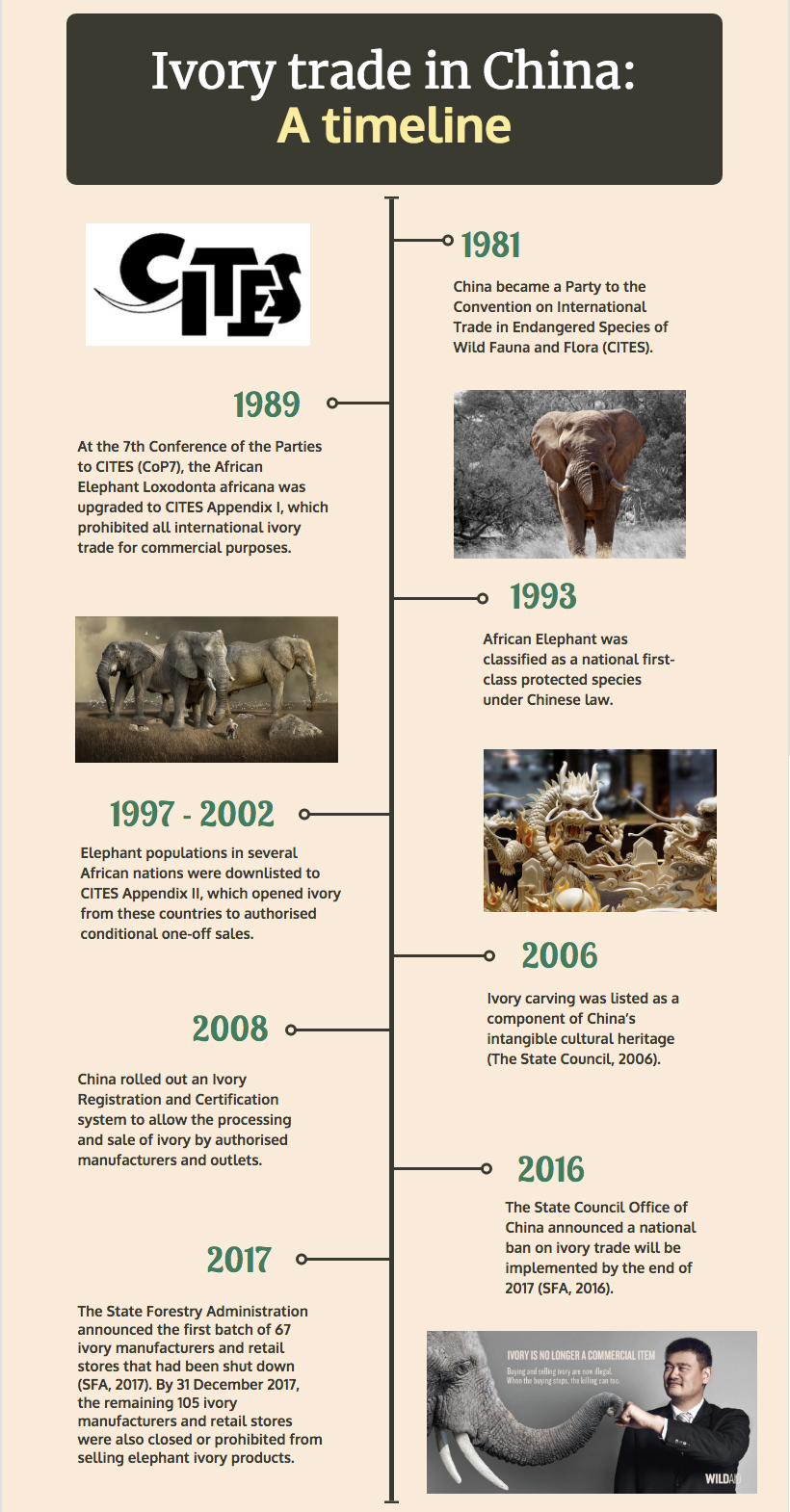 10 selfish reasons to save elephants