During a 2015 bilateral meeting with the United States, President Xi Jinping announced a plan to launch a nationwide emissions trading system (ETS) by 2017. This was something of a moonshot for the world’s biggest emitter: the creation of the largest carbon market in the world.

Pulling it off would require gathering data from 7,000 enterprises and setting a cap that would reduce emissions without overburdening industry. In 2013, provinces started laying the groundwork for this by creating their own pilot markets. Meanwhile, the National Development and Reform Commission (NDRC) enlisted ten sectors to start providing data on their historical greenhouse gas emissions.

Building on this foundation, the NDRC today outlined a roadmap for the development of a national-level carbon market over the coming years. In 2018, the legal basis for the ETS is expected to be strengthened and allowances will be allocated to power companies, according to analysis by Energy Foundation China. The market will then enter a trial period in 2019. While many details have yet to be revealed, here are five key facts about the emerging market.

1. China’s national ETS will be the world’s largest carbon market

When China’s ETS is fully operational, it will surpass the European Union’s (EU) carbon market to become the largest carbon market in the world.

China’s initial national market – composed of power generators – will cover approximately one-third of the country’s carbon emissions (3,500 MT CO2). The market will grow to include eight sectors. Because the power sector is the country’s largest, the initial single-sector market will still be almost twice the size of the EU market. 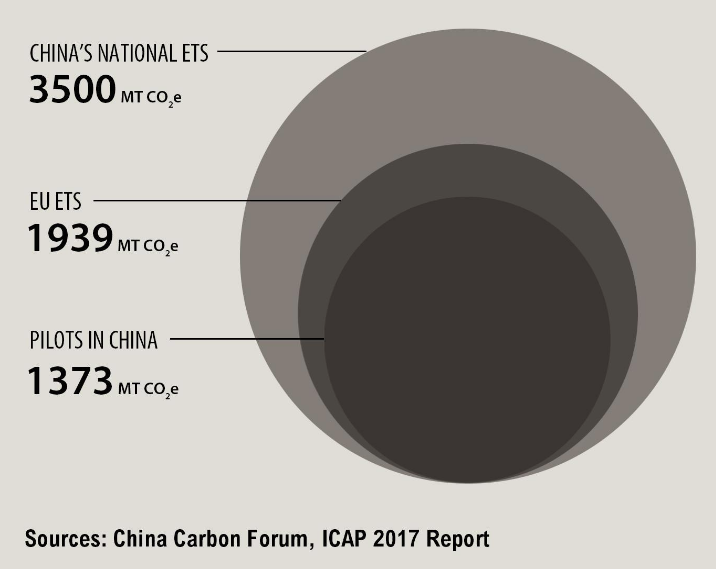 Liu Shuang, programme director at Energy Foundation China, said: “The power sector is the most suitable sector for China to start its national ETS from as this is the sector with the most credible and transparent emissions data. That is why both the EU ETS and the California carbon markets, the world's two largest running emissions trading systems, all included the power sector in their early phases.” 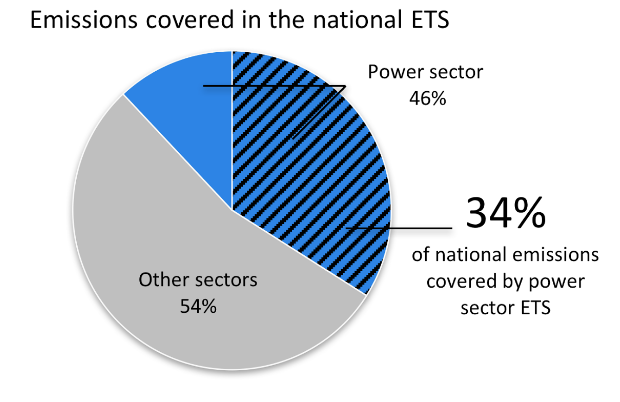 2. Carbon pricing may be the best tool to slash China’s emissions

Compared to other climate policies, carbon pricing is expected to play the largest role in reducing China’s greenhouse gas (GHG) emissions in the future. By 2030, carbon pricing could reduce CO2e by 27.5% compared to a business-as-usual reference scenario, according to modelling by the National Center for Climate Change Strategy and International Cooperation, the Energy Research Institute, and Energy Innovation. Their study ranks this contribution to emissions reduction as the strongest among all policies.

While the ETS is projected to play the leading role, it is not a silver bullet. The study shows that other complementary policies must be implemented simultaneously for China to achieve its climate goals. The Chinese policy landscape reflects this reality; the ETS is expected to work alongside a slew of other policies and targets such as power sector reforms and new energy vehicle sales quotas.

Prices in China’s pilot markets have fluctuated but have mostly stayed below 60 yuan/tonne and average approximately 30 yuan/tonne. According to the deputy head of NDRC’s climate change department, ﻿Jiang Zhaoli, companies will not feel real pressure to cut emissions until the carbon price hits 200-300 yuan/tonne, which he does not expect to happen until after 2020.

Results from China Carbon Forum’s 2017 China Carbon Pricing Survey show respondents (who are involved in the market) expect prices to rise steadily in the future as national market trading picks up, although uncertainty remains as to the extent of the price hike.

The US Environmental Protection Agency (EPA) estimates that the social cost of carbon is currently US$41/tonne (272 yuan) and almost all ETS carbon prices worldwide fall below this price. The low prices seen across all carbon markets are largely a result of the over-allocation of allowances, which has also occurred in China’s pilots.

This global issue is starting to be addressed through price floors, which California and the UK have introduced. Such policies could also be implemented in China.

Huw Slater, research manager at China Carbon Forum said: “Carbon prices have had a marked impact on emissions in places where a level of price certainty has been provided…In the pilots, China has mostly relied on ex-post adjustment mechanisms and price stability reserves to manage extreme prices. However, in order to encourage decarbonisation, a price floor could be considered.”

Although most carbon markets have yet to yield significant emissions reduction due to low prices and over-allocation, the systems are bringing in a large amount of revenue: carbon markets worldwide raised close to US$30 billion (198 billion yuan) by the end of 2016. This revenue is, in turn, being reinvested in other climate change mitigation and adaptation programmes.

Over time, trading activity in the pilots has increased; trading volume and value grew 106% and 29% respectively in 2016. A high compliance rate has been achieved: 99% of included enterprises abided by their pilot’s rules as of 2016.

Leaders have emerged among the pilots, helping to establish best practices for the national market. Guangdong and Hubei have experimented with auctioning allowances, the allocation approach the national market intends to eventually transition to after an initial period of free allocation.

The Beijing market has maintained the highest and most stable carbon price, hovering around 50 yuan (US$7.6)/tonne. After the national market begins trading, the pilots are expected to continue operating for some time, keeping enterprises outside of the national market scope engaged in data collection and carbon cutting. 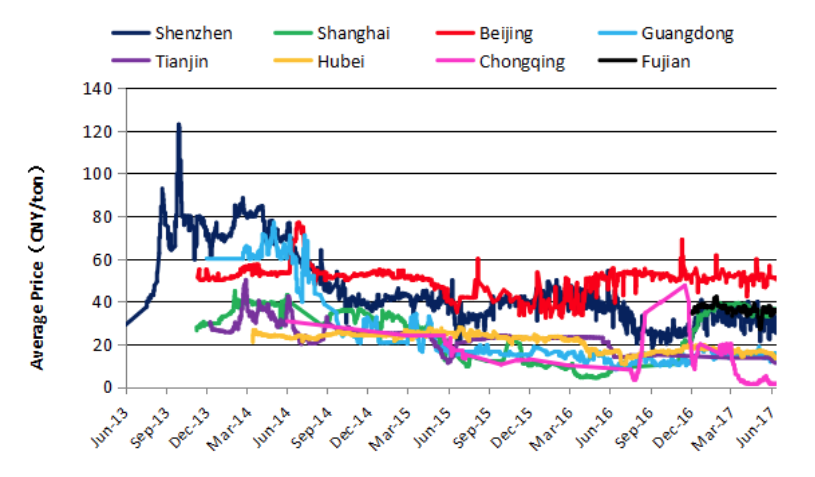 5. The ETS is expected to have a real impact on investment decisions

According to the most recent survey conducted by China Carbon Forum, respondents expect carbon pricing to increasingly affect investment decisions in the coming years.

Over a quarter of respondents hail from industry, the vast majority of which are covered by the ETS. Of the respondents, 75% think their investment decisions will be moderately or strongly affected by 2025.

One anonymous survey respondent said, “Environmental problems need a combined effort. The market-oriented way of social growth will not change soon, and climate change is imminent. In addition, the carbon market industry is mature enough, so it will inevitably generate a strong constraint in the next three to five years.”

Although the ETS will take a number of years to ramp up to full sectoral coverage, and to start driving significant emissions reduction, experts see this process boosting China’s overall climate action efforts.

Liu Shuang said, “Because of the ETS, China has a standing system collecting company-level carbon emission data, which will be the foundation for developing and improving many other carbon policies. Cap-setting and allowance allocation practices also equip policymakers, both on central and regional levels, with better knowledge and confidence in developing more transparent and fair carbon mitigation actions.”

Opinion: China will be key to creating a global circular economy

How can China pull off a soft landing for coal?