China’s pearl industry is losing its lustre for farmers struggling to adapt to stricter clean water standards that are changing the industry.

In 2015, China’s central government released a 10-point action plan to clean up the country’s filthy rivers and coasts, and protect groundwater quality. Tough enforcement has caught the pearl growing industry in its net.

Producers are struggling to adjust to widespread shut downs of substandard ponds, though some are shifting towards more efficient, innovative technology as a result.

The Water Pollution Prevention and Control Action Plan took aim at serious pollution from all industries, including mining, chemicals and manufacturing, by setting national standards and deadlines for water remediation, and targeted major river basins, including the Yangtze and Yellow Rivers.

China’s freshwater pearl industry operates on a vast scale in its heartlands in Zhejiang and Hubei provinces, where ponds cover hundreds of square kilometres. China’s return to the international market in the early 1980s transformed the use of pearls within the global jewellery sector.

Natural freshwater pearl fishing dates back several millennia in China, and the production of half-pearls in freshwater mussels developed in the 13th century.

The widely-used hyriopsis schlegelii and hyriopsis cumingii schlegelii mussel hybrids are capable of housing up to 50 freshwater cultured pearls at a time.

The large quantities produced in China since the 1980s have opened up new markets and market segments to the pearl industry, by offering cultured pearls at varied prices. 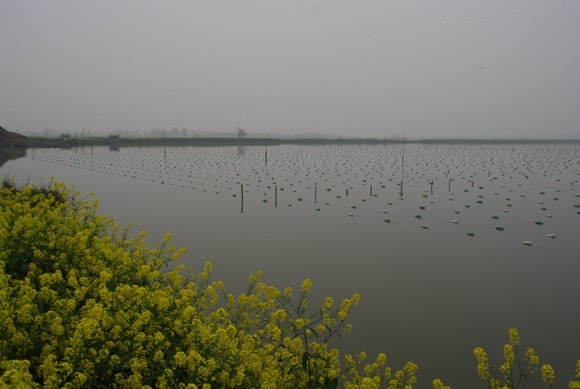 Most freshwater mussels are cultivated in lakes or man-made ponds, two or three metres deep, where they grow for up to five years before harvesting.

The ponds are enriched with fermented animal manure and often chemical fertilisers, too, to produce as much algae as possible, the phytoplankton food for mussels.

The result is pond waters that are often heavily loaded with nutrients, leading to coatings of algal blooms and oxygen deficiency, a phenomenon known as eutrophication.

To prevent this, carp that consume phytoplankton (usually silver carp and bighead carp) are added to the ponds. However, when badly managed, pearl cultivation can exacerbate nutrient depletion of water and soils, causing water pollution and eutrophication. 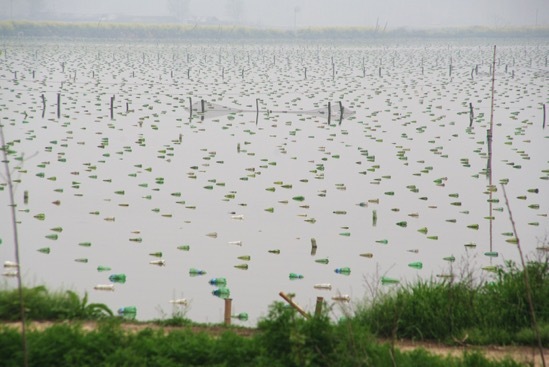 Freshwater cultured pearl farm near Changde, Hunan province. The mussels are placed in nets that are suspended from plastic bottles. Such water bodies are being investigated and regulated by authorities (Image: Laurent E Cartier)

Concern has grown in the past decade: in 2007, Hubei province temporarily banned new pearl farming licences while ordering a clean-up of blue-green algae blooms.

The struggle for standards

Implementation of the 2015 Water Pollution Prevention and Control Action Plan is having a serious impact on the pearl industry, forcing many pearl producers to improve the water quality of their ponds.

The plan foresees that by 2020 the quality of over 70% of the water in seven key river basins (some close to pearl farming areas), will be of sufficient quality to provide drinking water, i.e. level III or above (see table), and the amount of foul water in urban built-up areas will not exceed 10%.

In Hubei province, pearl farmers faced a fresh ban in late 2016 to eradicate all waters of quality standard V or lower by April 2017. Agriculture and fisheries officials devised this ban to implement the 2015 water remediation plan in their areas, given the large extent of polluted water.

One shuttered Hubei pearl farming company told reporters that it had about 73 square kilometres of pearl producing ponds. Another said production was down by 30%-40%. 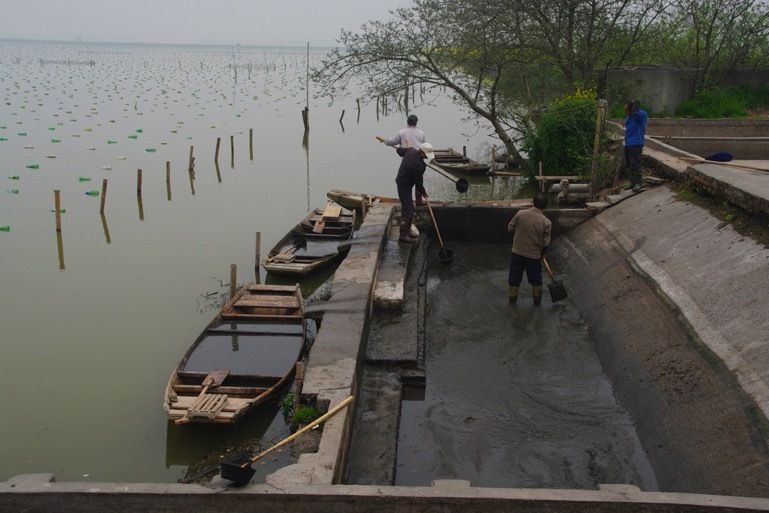 Animal manure is collected and put into the artificial cultivation lakes and ponds in order to foster algae growth that is necessary to feed the filter-feeding pearl mussels (Image: Laurent E Cartier)

In Zhuji, Zhejiang province, the birthplace of pearl production in China, this is simply the latest wave of closures. Zhuji has become more important as a pearl trading centre than a pearl production hub, as industrialisation has shifted ponds to more rural areas in the past two decades.

To continue trading, their waters must meet water standard IV (suitable for recreational use), by the end of 2017. Water quality may then rise to standard III, which can be used as a source of drinking water source.

Officials accept that the remediation of these sites is costly and complicated for farmers but assert it is necessary for the industry to thrive in the long-term, and to satisfy the 2015 plan to control water pollution.

Some pearl farmers and scientists are investigating how greater use of automation in aquaculture could help to avoid eutrophication. One option is to move from “traditional sewage farming” to “automatic water culture” using computer-controlled systems to filter and manage water and food resources more efficiently.

A recent study on optimisation of fish to mussel stocking ratios in pearl ponds showed more research is needed there too.

The new regulations are forcing the industry to upgrade its techniques to produce pearls in a more ecologically sustainable manner. Although pearl farmers are having a difficult time at present, the changes may ultimately lead to sustainable, better quality freshwater cultured pearls that will fetch higher prices.

How farming giant seaweed can feed fish and fix the climate