Over the past four years, New York Times photographer Josh Haner has used drone footage and stills to document the effects of climate change around the world.

His focus is on people displaced by sea-level rise, flooding, drought and deforestation, and on the natural and cultural loss that this brings.

A selection of his work went on display this month at Photo London in Somerset House. Haner spoke with chinadialogue on the sidelines of the event. 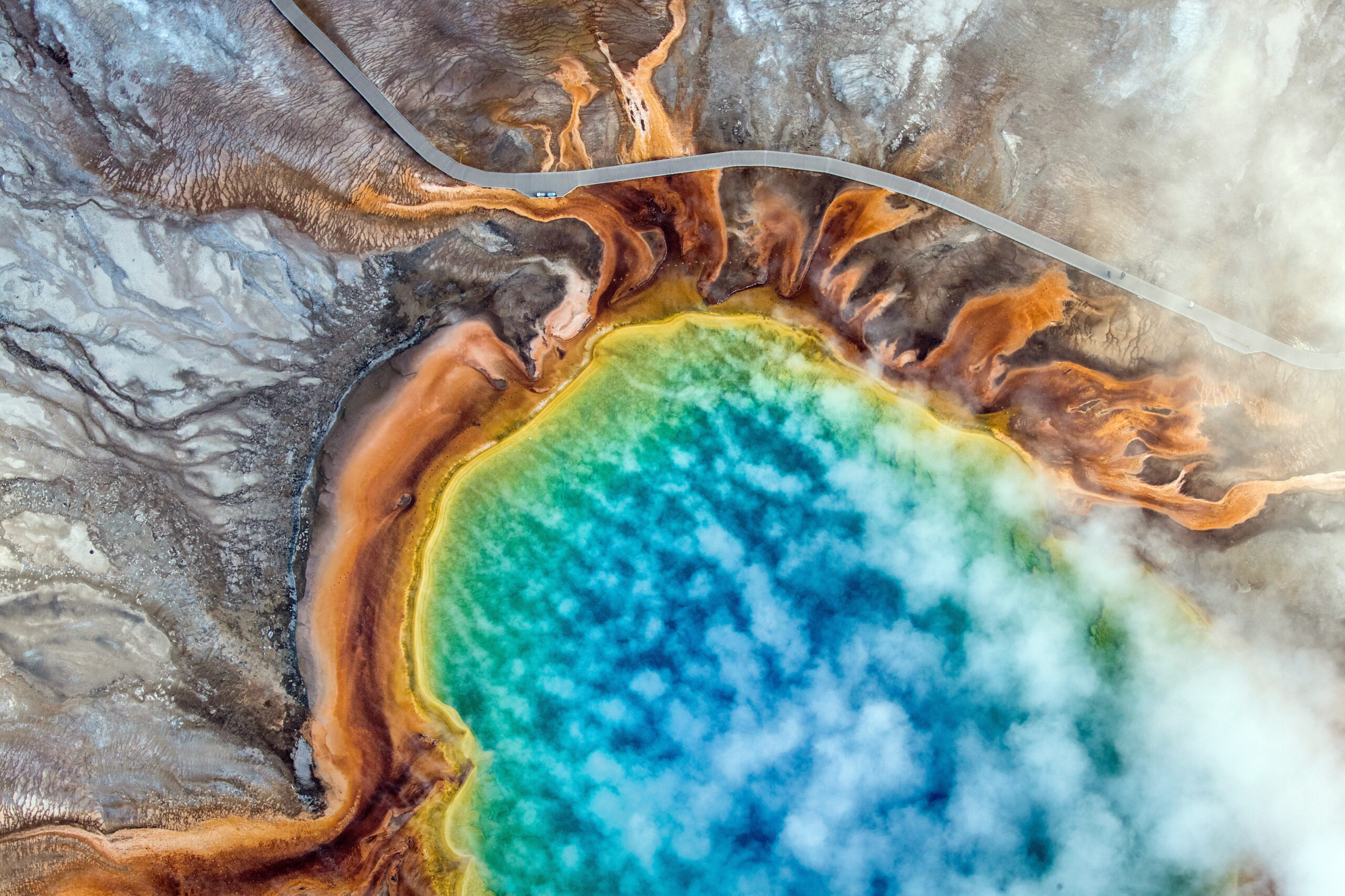 Visitors walk past Grand Prismatic Spring in Yellowstone Park where warming temperatures have brought rapid changes. Winters are shorter. Less snow is falling. Summers are hotter and drier. In a few decades, this iconic American landscape will not be the same.

Beth Walker (BW): How did this project come into being? Did it grow organically from what you were seeing, or did you have a grand vision?

Josh Haner (JH): When I started I was very much trying to utilise a new technology. I’d been studying drones for much of a year and was trying to find the first story a drone could bring richer storytelling to. And so when I travelled to Greenland to shadow the US ambassador I used this as an excuse to bring a drone and look for a story.

BW: Is there a personal story that’s really stayed with you?

JH: This picture [below] is of a woman from Buariki [an island in the Pacific Ocean] whose home is on the edge of a receding beach. She decided, along with nine other women from her town, to harvest saplings from nearby mangrove trees and plant them at low tide along the borders with their homes. These are small acts that won’t impact her but will impact generations ahead. When these mangroves start to grow their root structure holds onto the land to prevent erosion. For me, seeing communities that are not only thinking about their lifetime, but their children and their children’s children, and trying to prepare for future degradation of their environment, was really inspiring.

During low tide, Tabwena Kaokatekai, tends to her mangrove trees on the north shore of Buariki, North Tarawa, Kiribati. She recently planted the trees in an effort to stop or slow the coastal erosion that affects her island. “I don’t want my land to be lost to the sea.”

BW: In China you visited Ningxia and Inner Mongolia. What was your focus there?

JH: Our focus was on desertification and “ecological migrants”. In China we analysed satellite images from as far back [in the past] as we could get on the borders of the Tengger desert and we identified seven locations along the southern border where we’d seen the desert advancing. I went to all seven places to try and figure out where people were most impacted. We found a family who was dealing with the effects of desertification. 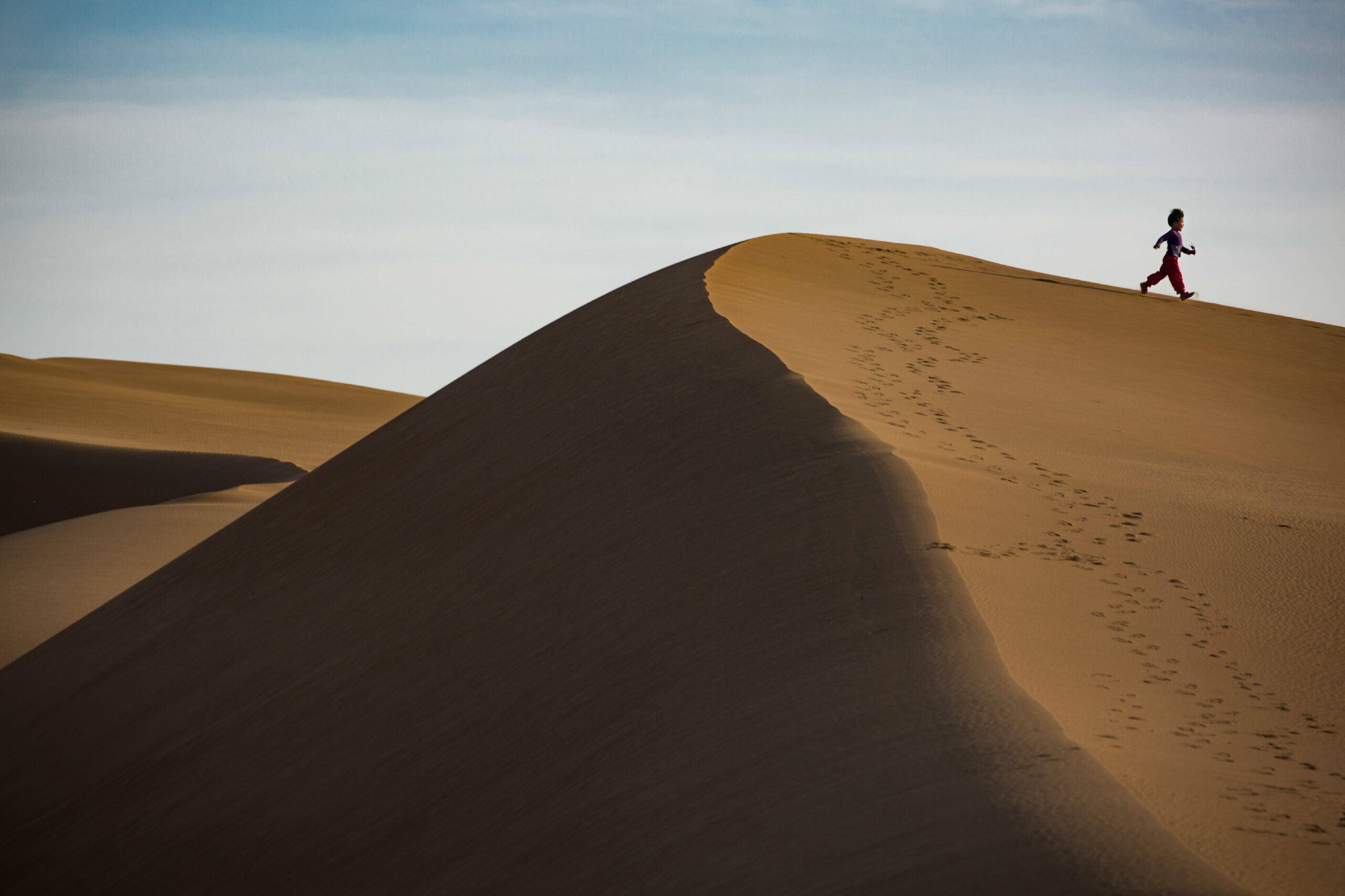 Liu Jiali, three years old, plays in the dunes outside her home in the Tengger Desert, a smaller expanse within the Gobi Desert. Families like Jiali’s are being displaced as desertification accelerates and the Chinese government attempts a massive relocation programme for residents in water-scarce areas.

In China, the government had already resettled many people to these relocation villages and [the family] had decided to remain behind. China cut off all state funding, I believe, to these areas, in terms of water and assistance, to encourage people to move to these very modern, very structured resettlement communities. So if you chose to remain behind you did so at your own risk.

BW: Another thing you are trying to show is the loss of culture along with climate change. Did you find this in the resettlement communities?

JH: China is very successful at moving lots of people very quickly. What they are less successful at is planning for the individual differences in the communities that they are relocating. This is an ethnic [Hui] Muslim population that has been removed yet their showers and toilets were put in the same room. There was a lack of understanding of what was required for those particular cultures. I also saw there was not enough forethought put into employment opportunities for this village.

Most people had come from an agrarian background where they grow their own food and raise their own sheep. And now they had a plot of land roughly 10 square metres to grow what crops they could. And you saw people walking their sheep around a neighbourhood built in an equally arid location. The women from the village were doing most of the work. They were walking to a watermelon plantation where they were spending backbreaking hours working while many of the men stayed at home because there were no careers for them built into this new area. 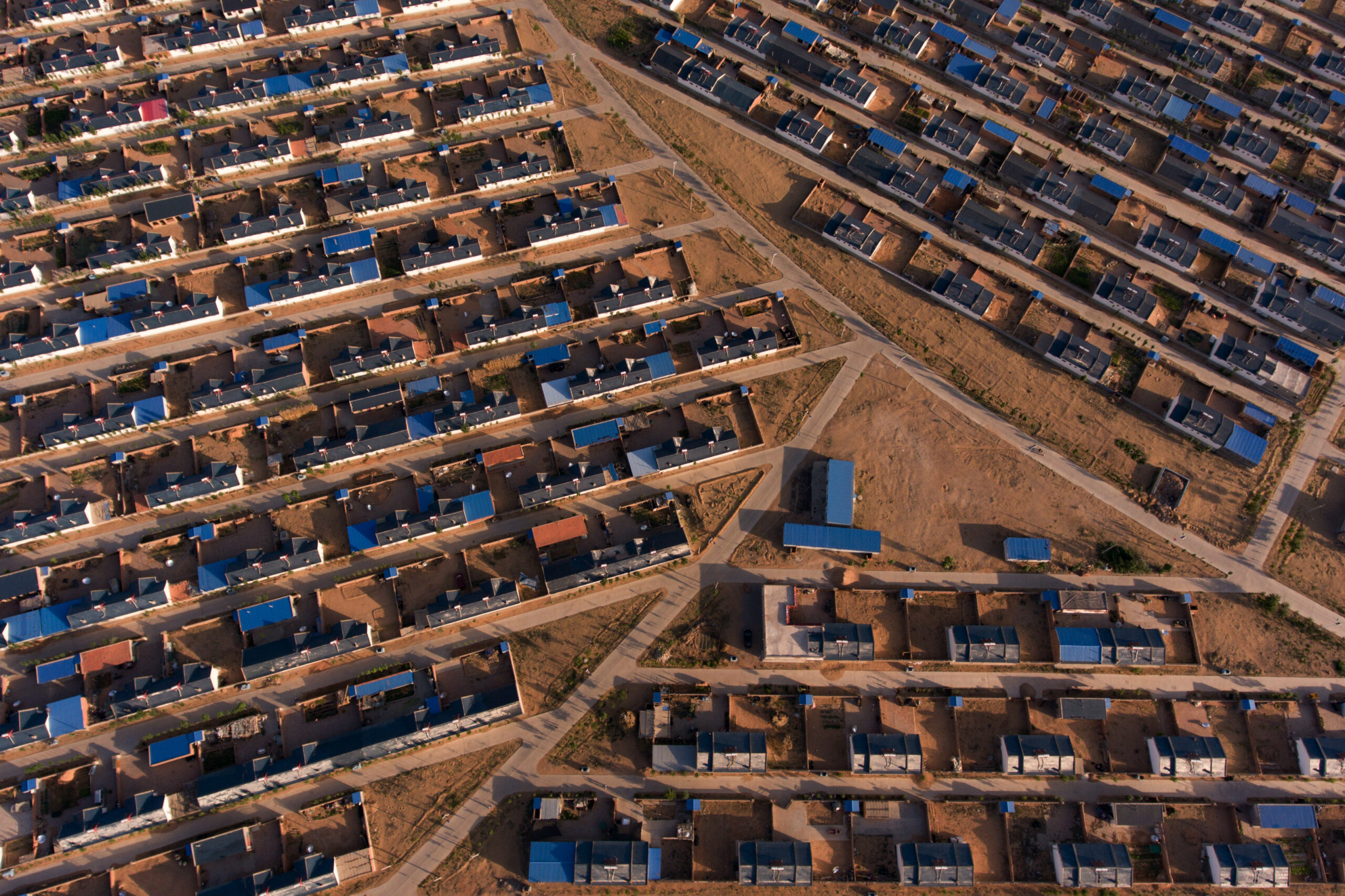 China calls them “ecological migrants”: 329,000 people whom the government has relocated from lands distressed by climate change, industrialisation and human activity to 161 hastily built villages. Miaomiao Lake is now home to 7,000 Hui Muslims, moved from their ancestral lands in the country’s northwest.

I hope we see some improvement because we are seeing this [displacement] all over the world. People have to be resettled in the US. In Louisiana [I took photos] of a community that received the first federal funding to relocate [because of climate change]. And the logistics of moving just 80 families in one community from a plot of land – an isolated strip of land – was huge.

BW: For your last project you went to the Galápagos Islands, where climate change is affecting the coral and fish, and the sea lions and birds that depend on them. I hear you learnt to dive to take these photos?

JH: I didn’t want to dive. I had massive ear pressure problems as a child. But when we started researching the effects of climate change in the Galápagos, it became obvious that most of the changes were happening underwater. So I had to learn not only how to scuba dive but to use a camera underwater. I had a great teacher in California, who was also an underwater photographer. I thought it was going to be warmer in the Galápagos, but it wasn’t and the currents were very intense. [We had to] duck out of the way of marine iguanas who hold onto rocks to feed off algae. This was one of our major stories – how marine iguanas are being affected through lack of food in the ocean. They are one of the most spectacular species in the world. We don’t know much about them, but the size of the skeletons contract during periods of food stress. So I knew I needed to document their lifestyle.

They swim during this season for an hour a day and the rest of the time they are sunning themselves on the rocks because they’re warm blooded and have to feed in freezing waters. So we had to time our arrival at these locations for a one-hour window. Communities have shrunk over the years so it’s very difficult to find them and they are camouflaged.

We also spent months dealing with permits to be able to visit places off limit to tourists and accompanied by a park ranger at all times to monitor our impact on the environment and the species and make sure we weren’t disturbing animals. 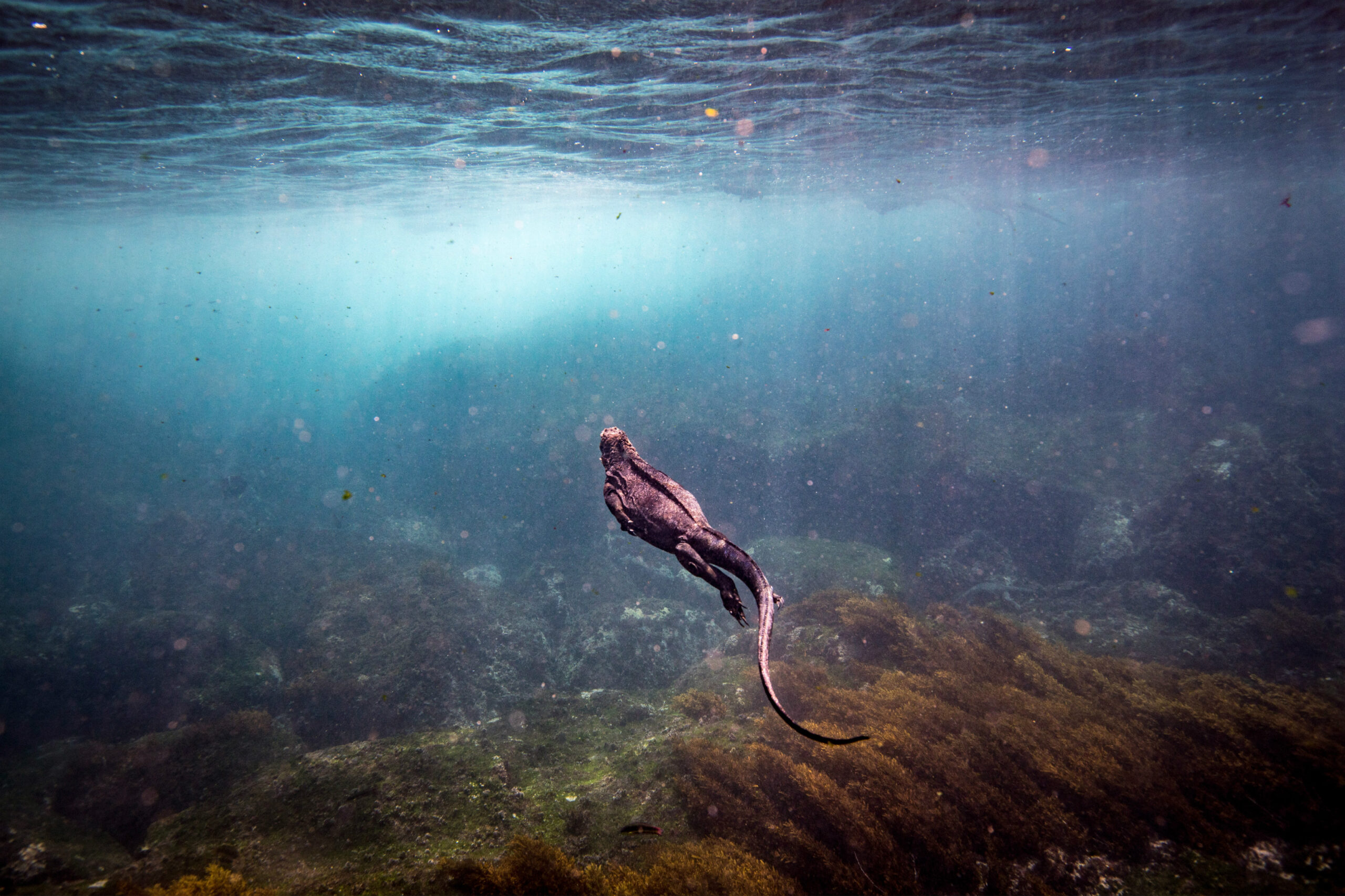 As algae decreases with rising ocean temperatures, scientists believe that marine iguanas in the Galápagos Islands may reabsorb parts of their skeleton in order to increase their chances of survival on a smaller diet. Little more is understood about how the iguanas do this, other than that the adaptation may be central to their survival as El Niño cycles become more frequent.

BW: What are you planning next?

JH: What I want to focus on going forward, now that we have showed the doomsday scenario of how climate change is impacting people’s lives, is to look at solutions. The hard part of a lot of the climate work is trying to visualise something that is so abstract and happens on a glacial timescale. The only place I visited where something was happening was in Jakarta where sea walls failed while I walked through a neighbourhood. [The Indonesian capital is rapidly sinking, with 40% of the city already below sea level]. Then we saw all these people running with blue vests to fix the sea wall.

The biggest difficulty in covering climate change is finding arresting visuals that people can relate to and that aren’t the used canon of climate change we’ve come to expect, of the polar bear on the last piece of ice in the Arctic or melting glaciers. 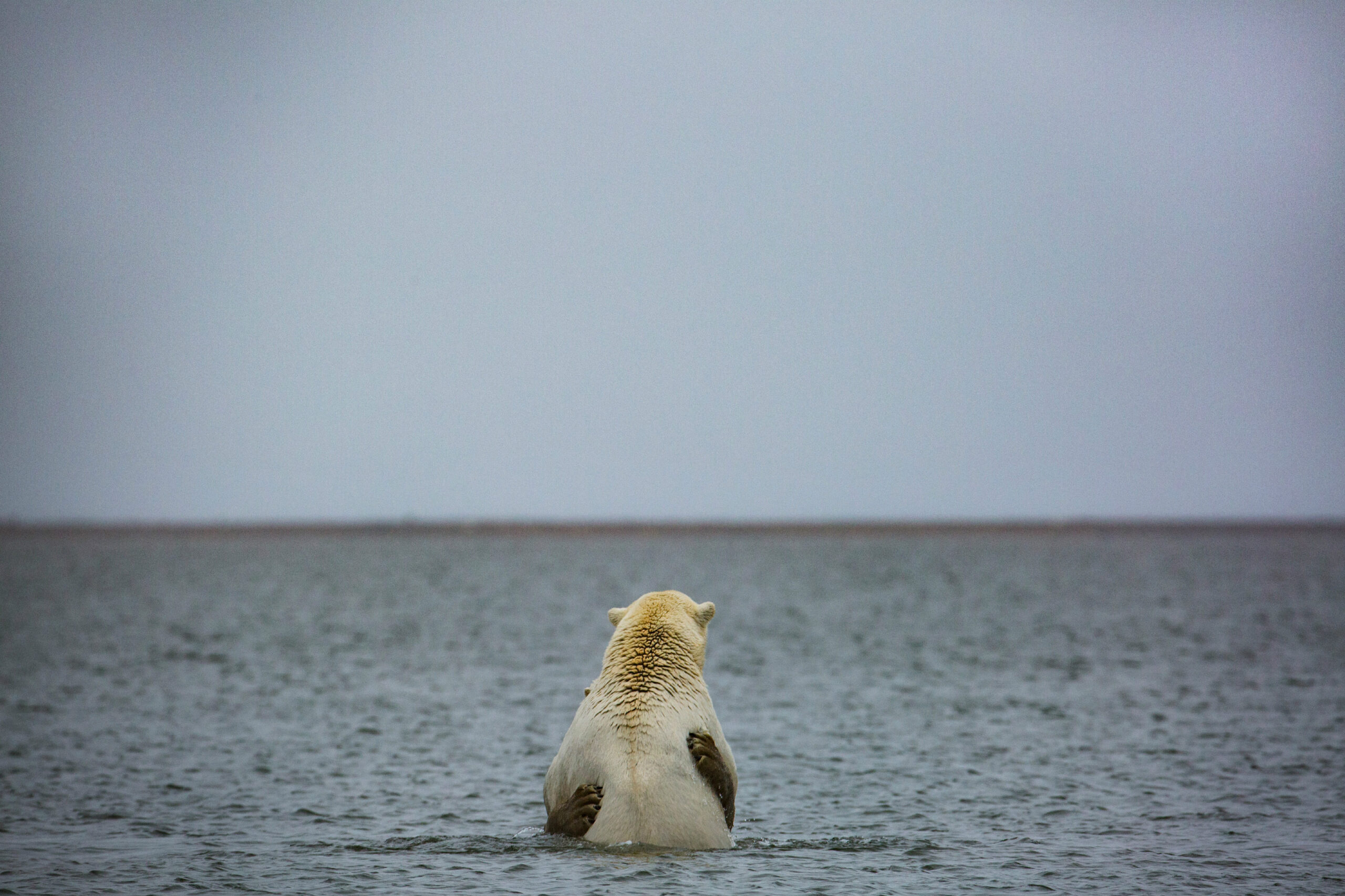 Two polar bears roughhouse in the shallow waters near the Arctic village of Kaktovik. Because the sea ice they rely on for hunting seals is receding, bears have flocked to this area looking for an alternative food source on land. As they spend more time in and around the town, rolling around on the shores and feeding on discarded whale carcasses hunted by local villagers, their typically snow-white coats turn grey.