‘There is no cavalry riding to the rescue of the places we live in, it comes down to us,’ says Rob Hopkins. Seven years ago, Hopkins, then a permaculture teacher, began an experiment in Totnes, a market town in southwest England, to ‘get people thinking about peak oil’. Over a year, townspeople came together to watch films, hear lectures and discuss what would eventually become a plan for a ‘future without oil’.

As this ‘Transition Initiative’ gained momentum, they split into working groups to tackle food, energy and housing issues and to develop a community-based 20 year plan to reduce the town’s overall fossil fuel dependence. Their passion spawned a solar buyers club, tree planting and garden sharing groups, education initiatives and a community land trust. They began skills swaps to bring back traditions that had all but died off since their grandparents’ generation, from sock darning to bread making.

Transition’s approach of ‘skilling up to power down’ seemed to change the rules of public engagement, as the fear and apathy so typically following on from awareness-raising efforts was channeled, instead, into fun and meaningful activity. ‘We must speak the language of people who don’t want to get engaged,’ says Hopkins.

Today there are over 1,000 Transition Towns in 44 countries. ‘We always designed Transition to be self-organising, so Transition in Brazil doesn’t feel like it’s been imported from England. In Brazil, it’s spread from the wealthier parts to the favelas [slums]. The trainings are tailoured to the setting. It is not run as a Coca-Cola franchise. It’s up to the groups on the ground what they do, we just provide an impulse and some inspiration and link everybody to share their stories,’ says Hopkins.

There is no one way to start a Transition Town, however the website does point to specific ‘ingredients’ or stages to the process. Hopkins says that what spawns a lot of Transition groups is concern over food security. Civilisation, he notes, ‘is only three meals deep.’ Transition’s successes in helping communities develop a more resilient food system include promoting low-carbon food growing methods based on permaculture principles to re-orienting shopping habits to shift the balance back to local businesses.

‘Local food projects don’t need funding, they don’t need permission, you just get together and do it,’ says Hopkins. ‘Quite a lot of unused land in big cities could be used for market gardens. Food initiatives also give people the confidence to do more.’

As Transition’s work broadened and deepened, they began to consider how the Transition approach might serve as a tool for economic regeneration. ‘We’ve done three economic blueprints in the UK, which look in detail at where all the money in a local economy goes. For example, where a town will spend £60 million a year on food, 93% of that is spent in supermarkets. Out of that, 85-90% of that money leaves the town every day,’ says Hopkins. Transition Towns made an economic case for what a 10 per cent shift in spending would do and how many jobs it would create. ‘Transition work is really starting to have an economic case, rather than just doing it because it brings us closer together,’ he adds.

In March 2007, Transition Town Totnes launched the UK’s first Transition Currency. The Totnes Pound is a complementary currency backed by sterling that can be spent in over 70 shops or businesses now participating in Totnes. Shopping at local businesses creates a kind of virtuous circle as local business owners re-spend the money they make in locally-sourced goods and services. Since the Totnes pound’s launch, five other local currencies have emerged in the UK in Lewes, Brixton, Stroud, Cardiff and Bristol. Not only a talking point and a local symbol of pride, local currencies have confirmed the ‘local multiplier effect’ that money spent local, stays local. 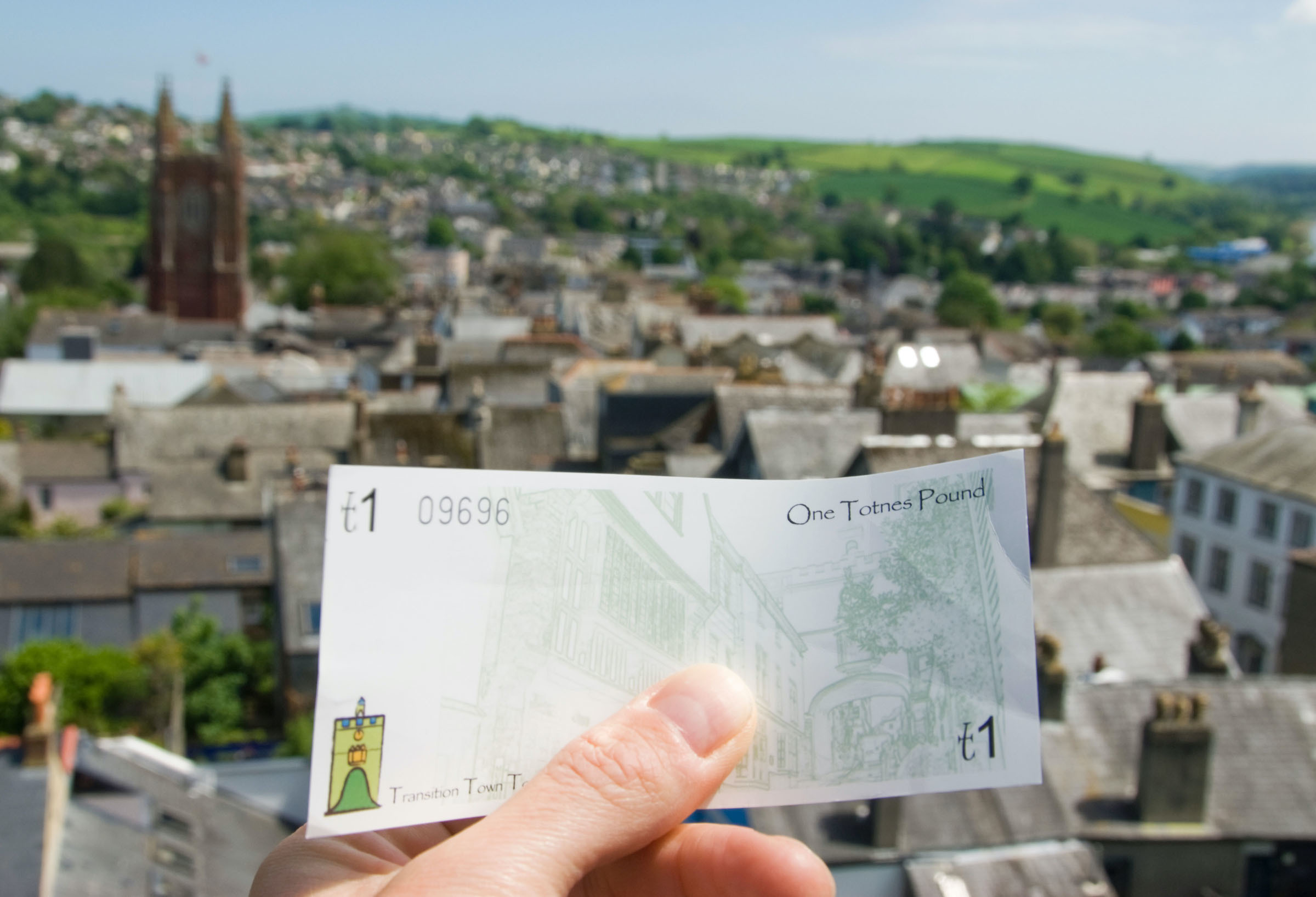 The Totnes pound with the Town in the background. (Image: Alamy)

But with millions more people leaving small towns and villages to join the world’s growing megacities in the next decade, can a small-scale, bottom-up approach really gain ground? ‘The best way to eat an elephant is in very small pieces,’ Hopkins replies. ‘Trying to Transition a whole city would be the most monumental task. What we’ve seen in London is that Transition works on the neighbourhood scale, where there are about 50 different Transition initiatives. There are things you don’t have influence over on the local level, such as transport, but you could imagine local groups networking to influence decisions on the city scale. That is emerging as the best way.’

As for the future of Transition Towns, Hopkins is more concerned about investment to support the new re-localised economies as they emerge and in maintaining support for the group’s volunteers through skills training. ‘Transition always seeks to work with other like-minded groups,’ he says, be it through government, industry or civil society. In well-established Eco-Cities such as Freiburg, Germany and Stockholm, Sweden, Transition groups support the city and state authorities with local implementation of large-scale sustainability efforts.

‘You don’t need anyone’s permission to do a Transition Town, there are lots of resources online,’ Hopkins says. ‘There is no reason why Transition wouldn’t catch on in a country like China or anywhere else. The challenges about what life will look like beyond fossil fuels are just as pressing. Fossil fuel dependence brings vulnerability and it wouldn’t take an enormous amount of awareness-raising to get people thinking about those issues.’

Time for a reality check on China's ghost cities

Does city growth have to sacrifice the environment?