As China readies its 13th Five Year Plan that aims for greener economic growth, the country could reach a turning point in environmental quality a decade from now

China will reach a ‘turning point’ in its efforts to protect the environment around 2025, as a raft of new policies could deliver big improvements in air soil and quality that the US and Japan achieved relatively late in their economic development, according to a paper from a senior scientist.
Wang Jinnan, deputy director and chief engineer at the Chinese Academy of Environmental Planning, says that an ‘environmental turning point’ will be reached when per-capita GDP reaches US$10,000. China is expected to reach US$11,000 by 2020 and US$20,000 by 2030.


Based on the same projection, an estimated per-capita GDP of US$15,000 for China by 2025 will have by then created the conditions for a turnaround as environmental issues will be dealt with through a mixture of tougher laws, enforcement and a big increase in funding from the government and private sector, Wang says.


But making China’s environment healthy for its citizens will take longer, and Wang says 2030 is perhaps the date after which air, soil and water levels would be deemed to be at consistently safe levels.


Some might argue that China’s pollution problems are far worse than those in the US and Japan in the 1970s, when governments had to introduce tough, rigorously-enforced laws in response to public anger about pollution and obstruction and lobbying by heavy industry.


In China’s case, the off-the-scale level of toxic air pollution in 2013 and 2014, and figures showing that one-fifth of arable land and 60% of groundwater supplies are severely polluted, underline that the task of cleaning up in the world’s most populous country will be much bigger.
China’s large-scale pollution clean-up began as early as the 9th Five Year Plan (1996-2000), Wang said, with treatment of the Huai River and efforts to control acid rain. While the 12th Five Year Plan (2011-2015) set seven binding pollution targets, all of which—apart from the cap on nitrogen oxides (NOx)—were achieved a year ahead of schedule, China today remains the world’s biggest emitter of major pollutants and CO2.


The 13th Five Year Plan, which starts from next year, is an opportunity to transform and improve environmental protection in China, but experts warn that failure to deliver could lead to a major social, economic and environmental crisis.
Kuznets curve


Wang says that China has taken 40 years to complete a process of industrialisation and urbanisation that took developed nations a century to bring under control.
But China has also seen 100 years of environmental problems crammed into just three decades because of the breakneck speed of its economic development and lack of consideration of the environmental consequences. 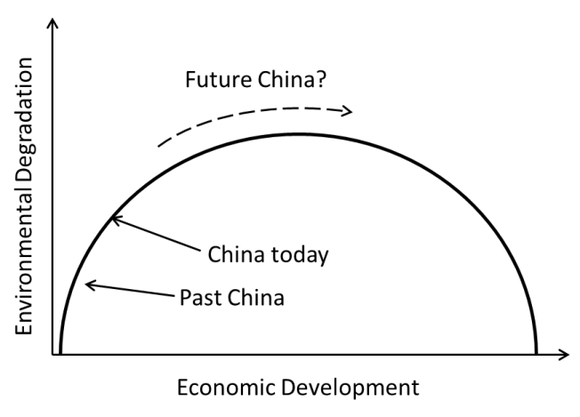 Such a view has been theorised since the early 1990s through the environmental Kuznets curve, which relates to the relationship between environmental quality and economic development. Problems caused by pollution tend to get worse as modern economic growth occurs until average income reaches a certain point.


Currently environmental quality in China is at a historical low, and the condition of its natural resources languishes far behind its western counterparts.


While developed countries have been able to deal with traditional environmental issues and focus now on climate change, biodiversity, control of chemicals and further improvements to environmental quality, China has only just started to tackle these issues.


Further details on China’s green transition should be revealed this month in the country's national climate plan to be submitted to the UN, and later this year in the the 13th Five Year Plan.
Impact on industry


Meanwhile, Wang’s employer has developed a forecasting system that includes models of the economy, energy and resource consumption during the 13th Five Year Plan.


Wang says that over the next decade emissions of traditional pollutants will pass peak values. Energy consumption will become less carbon-intensive and output from energy-hungry industries will slow.


A less hectic pace of economic growth will also increase pressures on central and local government as GDP slows, and jobs are lost in highly polluting sectors that also have far too much spare capacity.


Were such a slowdown to worsen, local governments and some businesses may waver in their commitment to dealing with pollution. 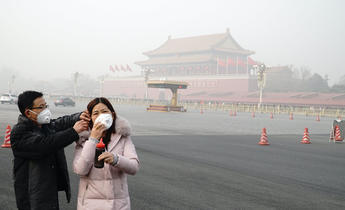 Chai Jing's wildly successful documentary means that for Chinese environmental policy, nothing will ever quite be the same again

When the wind blows: What's behind Beijing's better air?

Blue skies have come back to Beijing over the past few months as windier weather has helped disperse smog and deliver better air quality, but are curbs on fossil fuels also helping?