Climate change will worsen air pollution in the US, where 148 million people already face health risks from smog and soot, says new report

Nearly half of all Americans live in areas with unhealthy levels of air pollution, according to an American Lung Association (ALA) report released Wednesday.

Nearly 148 million people live in areas where smog and soot particles make it unhealthy to breathe the air, according to the ALA's annual study on US air quality.

The report, which is based on data collected between 2010 and 2012, found smog, or ozone, had worsened in 22 of the 25 biggest US metropolitan areas, including Los Angeles, Houston, Washington-Baltimore, New York City and Chicago – and said there was a high risk of more high-ozone days because of climate change.

"Weather played a factor," the report said. "The warmer summers in 2010 and 2012 contributed to higher ozone readings and more frequent ozone days. Sunlight and heat create conditions that increase the risk of high ozone levels."

Smog, or ozone, which is the most widespread air pollutant, forms more readily in hotter temperatures, and is expected to increase under climate change. "It's going to make it harder to clean up air pollution," said Janice Nolen of the ALA. "Days that wouldn't ordinarily have high ozone levels are going to have them."

She added: "It's going to be much harder to keep ozone pollution down to the levels that we should be breathing."

There is growing concern globally – including in the US – about the health risks of air pollution. The report's release comes a day after the supreme court endorsed the Environmental Protection Agency's efforts to deal with smog and soot that travel across state lines. The ALA had joined that case on behalf of the EPA. The group has also been pushing hard to tighten air pollution standards, and has supported the EPA's moves to force power plants to cut carbon dioxide emissions.

Air pollution in New Delhi rose to record levels in winter, triggering a debate about whether the Indian capital had now caught up with Beijing. Britain was on smog alert earlier this month after recording very high levels of air pollution.

Meanwhile, California's pollution control officers warned this month that extreme heat and wildfires could set back decades of improvements in air quality, boosting smog formation and spewing dangerous smoke into the air.

Eighteen of the 25 US cities with the worst particulate pollution saw a drop in year-round particle pollutants because of cuts in emissions for coal-fired power plants and other measures. Thirteen of them, including Los Angeles, Pittsburgh and Atlanta, registered their lowest ever levels. But the report said those cities still failed to meet national standards for year-round particle pollution.

Suzanne Goldenberg is the US environment correspondent of the Guardian and is based in Washington DC.

Ozone and mercury pollution from Chinese industry is contributing to worsening air quality in west coast states like California.

In the absence of stricter environmental protection policies, it is marginalised groups that bear the larger burden of pollution in both China and the US 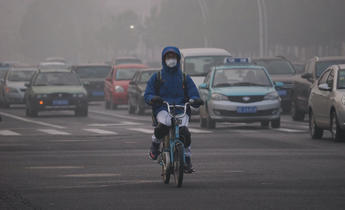 Ten steps for Chinese cities to clean up their air

The progress made by San Francisco in cleaning up its air offers lessons for Beijing and other Chinese cities, says a former planning advisor for the San Francisco region