The high levels of air pollution recorded in Shanghai are damaging the economy, environment and public health

The multiple reports of smog in northern and eastern cities in recent weeks have been a reminder that air pollution is not just a problem for Beijing.

The pollution in Shanghai - which reached record levels last week - has been so bad that children and the elderly were advised to stay indoors, while factories were closed. Shanghai mayor Yang Xiong admitted that the city had bad air pollution, but claimed "it would be fine in the following days."

This has done little to dispel doubts about the efficacy of the measures being taken to tackle pollution. Huang Wei, who works on climate and energy issues for Greenpeace in Beijing, told Bloomberg that “the steps taken by the Shanghai government to alleviate pollution aren’t enough ... smog brings a huge health risk to the public and definitely affects multinational companies’ investment decisions.”

Some of the criticism has had a wider scope. Wu Bihu, a professor at Peking University, told Reuters that "the smog crisis covering large parts of China has revealed the failure of the government’s development strategy of only going after GDP”.

The smog has also hit the economy, underlining the interpendence of China's financial and environmental futures. As the air pollution levels worsened, there was a slump in Chinese equities, triggered by a dip in the share price of Yanzhou Coal Mining Company, China's fourth-largest coal producer. Its share prices hit a three-week low over fears the government would intervene and reduce coal consumption. Bloomberg reported that China Eastern Airlines also plummeted to a two-week low.

However, perhaps the greatest concern for Chinese citizens is the impact air pollution might be having on their health. As Wang Xiangwei, editor of the South China Morning Post wrote, "What good is achieving Xi's Chinese "dream of rejuvenation" if people cannot breathe the air or drink the water?"

A recent graphic from Greenpeace starkly depicts the link between PM 2.5 concentration and the risk of lung cancer. 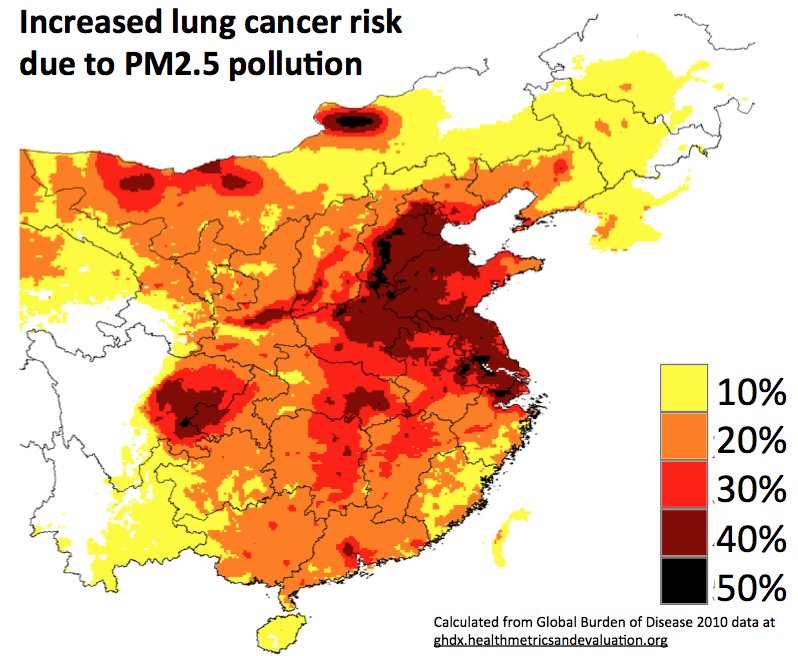 Nick Holdstock is a former assistant editor at chinadialogue. He is the author of The Tree That Bleeds: A Uighur Town on the Edge (Luath Press Ltd 2011).

China to use artificial rain to combat air pollution

As China relaxes its one-child policy, doctors suggest smog may be responsible for the country’s worsening infertility