Earlier this month, Germany’s biggest commercial battery power plant broke ground on an expansion that will triple its capacity. Owned by WEMAG, a municipal utility that generates its own power from renewables and natural gas, it works to balance out supply and demand on the power transmission grid.

When it was first commissioned in 2014, the 5-megawatt (MW) plant in the northern German city of Schwerin was the biggest project of its kind in Europe. That a German facility had this honour seems fitting given the country’s reputation for technological competence and efforts to switch to a greener energy supply.

But growth of battery storage in Germany is lagging behind other countries. The company that built the Schwerin plant, Younicos, sees bigger opportunities in places like the UK and Texas, where the regulatory framework is better designed to reward storage facilities, it says.

“Germany is a difficult market for grid-scale battery projects because the regulation – unlike in other countries – is not favourable to storage,” says Younicos spokesperson Philip Hiersemenzel. “Storage does not get rewarded for the speed and precision, and value, that it brings to the entire system.”

Last year, almost a third of the power consumed in Germany came from renewables. But integrating electricity from fluctuating sources into a grid that is still reliant on fossil fuels remains a tough task and a barrier to a completely clean and efficient network.

Unlike conventional thermal power plants that can produce electricity according to demand, wind and solar installations are at the mercy of the weather. Sometimes, the wind farms in Germany’s gusty northern states produce so much power they have to be disconnected to prevent overload. At other times, production falls far short of demand and fossil-fuelled power fills the gap.

Plants like the one in Schwerin offer a potential solution. They sell frequency control services to transmission grid operators (TSOs) to keep the grid stable – a role traditionally left to conventional power plants – but with vastly improved flexibility, response times and accuracy.

A boom in home storage systems could also help. Since Germany introduced feed-in tariffs guaranteeing above-market prices for renewable power, millions of Germans have installed PV solar panels on their roofs and, increasingly, these come with batteries attached. When aggregated, these small-scale systems can also help to stabilise the grid. Power company LichtBlick, for example, has teamed up with Tesla to network multiple home systems into a “virtual power plant” that can provide frequency control – or sell power in bulk at times of higher energy prices.

Still, for storage facilities to make money on the wholesale power market, there must be a significant difference between low prices when there is an oversupply – for example in windy weather or during sunny hours – and high prices when production drops.

“We still have a lot of conventional power plants on the grid which are not flexible enough to change if power prices change. This means you don’t have prolonged periods of high or low power prices as of now,” he says.

That could change once the last nuclear power plants go offline, taking a large chunk of base load power out of the market and leading to more price “spiking”, adds Göß. “That is where storage could earn money.”

Too much wind – or too much coal?

Even once Germany has fulfilled its pledge to close all of its nuclear plants, it will still have plenty of conventional power stations. Coal provided for over 40% of German electricity consumption in 2015. Despite high-level debate and pressure from green groups, the country has yet to put solid plans in place to phase it out.

The argument for keeping coal-fired plants online is that their steady supply of power is needed to keep the lights on when production from renewables is low. But critics of the approach say these plants – which need to keep running at all times – hold back the development of a greener, more flexible power system.

The overload on the grid, the argument goes, is not because there is too much renewable power but too much inflexible lignite power than can’t be shut down when renewable production goes up.

“There is no classical power plant that can follow these very quick changes. For this we need different storage components and not any more the base load power plants,” says Werner Beba of the Hamburg University of Applied Sciences.

Beba is working on a pilot project using lithium-ion battery facilities to store energy from a wind farm in northern Germany, part of a wider research project designed to explore solutions for a renewable-based energy system and help the government create better legislation.

As well as batteries, the team is experimenting with other storage methods, such as converting electricity into gas, which allows renewable energy to be stored on a bigger scale and for longer, explains Beba. Smart grids, which would allow power-generation and storage facilities to respond to supply and demand, are also being tested.

Creating a more flexible, integrated and intelligent energy system will ultimately require better regulation than Germany’s current Renewable Energy Act, says Göß. Some positive steps have been taken in recent years. Amendments to the act, due to come into force next year, exempt certain types of storage from a charge to cover the cost of feed-in tariffs, for example. Lawmakers are also discussing a change to Germany’s interpretation of EU regulations that currently prevent transmission grid operators from investing directly in storage facilities.

But there is still a long way to go. Critics point to perverse elements in the updated Renewable Energy Act, such as measures to limit the growth of renewables so as not to overload the grid.

Beba argues that real progress will come when Germany gets serious about shifting the fundamental structure of the energy system away from conventional power generation. That means action on coal. “The government understandably wants to ensure we don’t have a blackout situation,” he says. “But on the other hand a political decision is needed.”

Ruby Russell is a Berlin-based journalist whose work has been published by Deutsche Welle, Clean Energy Wire and The Guardian, among others.

Angela Merkel’s decision to abandon nuclear has been hailed as revolutionary by some – and dismissed as a political stunt by others. Here, Jürgen Maier gives an insider’s view.

Power struggles: Nukes to go back on the menu?

Twenty years on from Chernobyl some advocates of nuclear power describe reactors as a source of “green” energy. Environmentalists disagree, but the US, Russia and China are all poised to renew their interest in the industry. 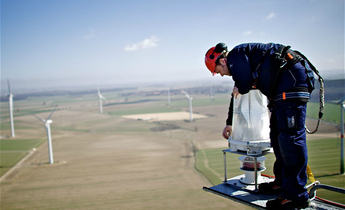 The German government has trimmed its proposed biofuel blend levels in fossil fuels, Reuters reported. The cabinet approved a proposal from the environment ministry that oil refineries would have to mix 5.25% biofuels in fossil fuels by energy content in 2009, instead of a previously planned 6.25% blend.

Canada was ranked last among the Group of Eight (G8) leading industrialised nations in addressing climate change, while Germany came first in an assessment by the environmental organisation WWF and the German insurance company Allianz, Agence France-Presse reported. Issued ahead of next week’s annual G8 meeting in L’Aquila, Italy, the assessment listed the United Kingdom second, followed by France.