That's one of the main findings of research by the UK's Oxford University in collaboration with Beijing Normal University. It concludes that China's planners need to do much more to account for the impacts of severe droughts, heatwaves, rising sea levels and floods by making infrastructure more resilient and 'climate-proof'.

Flooding in 2011 in China's eastern Zhejiang and Hubei provinces was a foretaste of the huge disruption that climate change is expected to unleash.

Then, 28 rail links, 21,961 roads and 49 airports endured major damage and disruption, while the same extreme weather event resulted in the failure of 8,516 electricity transmission lines, prompting the shutdowns of factories and cutting off power to millions of households.

Droughts in 2012 affected a substantial proportion of China’s water supply – thousands of reservoirs issued warnings of “exceptional low water levels” in provinces across the country, including Hubei in the centre, Yunnan in the southwest, and Heilongjiang in the northeast, resulting in water shortages in high-density urban areas.

Rapid urbanisation has provided China with a vast amount of infrastructure, much of it new, and much of it at risk.

The country has invested 8.5% of its GDP in building new roads, railways, airports, ports, power plants, grid infrastructure and water treatment works since 1992. That stock as a percentage of GDP is now 71%, well above the global average.

In the case of flooding and drought, China’s second National Climate Change Impact Assessment says that the mean annual runoff will decrease by 2–10% in drought-prone northern China, while increasing by more than 20% in flood-prone southern China.

This means that parched northern China will become even drier and the wet south will become more susceptible to flooding.

Climate change not only affects existing infrastructure but also the that which is yet to be built.

Despite the recent slowdown, China’s economy is expected to surpass the US as the world’s largest by 2020. Capital accumulation – which pays for infrastructure investment and has contributed approximately 70% of GDP growth since 1952 – will still remain one of the main contributors to growth for many years to come.

As the world’s largest infrastructure investor, China has a lot to do when it comes to planning and implementing the adaptation efforts required by the 2015 Paris Agreement on climate change. Indeed, the National Strategy for Climate Adaptation prioritises the infrastructure sector and calls for a more systematic assessment of the risks involved.

However, this is not an easy task. China's infrastructure system is vast and complex to understand. There are additional uncertainties to factor in. Modelling how climate change affects extreme weather events is difficult if not impossible.

The joint research by Oxford and Beijing Normal University has developed a suite of infrastructure (energy, transport, water, waste and ICT) models to understand how exposed China's infrastructure is to various potential climate change impacts.

They use a concept called the “infrastructure criticality hotspot” which is defined as a geographical location where there is a concentration of critical infrastructure, measured according to the number of customers directly or indirectly dependent upon it. The basic idea is that these hotspots show areas where there are many infrastructures which are serving a large number of people. 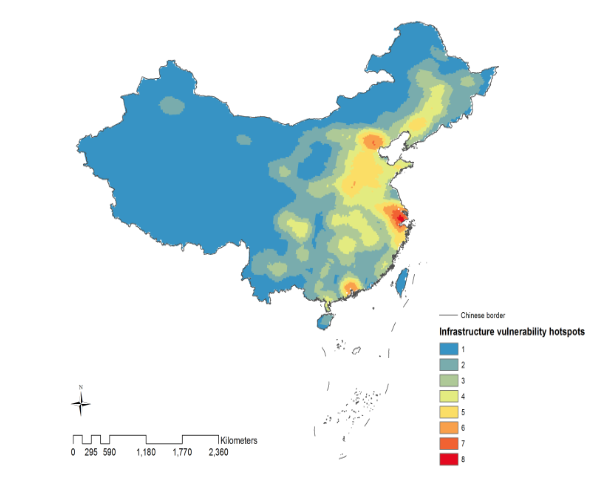 Hundreds of millions at risk

The above infrastructure hotspots indicate China’s potential vulnerability to natural disasters. Using advanced hydrological models, the researchers investigated how these areas may be affected by flooding and drought hazards which could be exacerbated by climate change.

With regard to flooding, they found railways, aviation, shipping, electricity, and wastewater in Anhui, Beijing, Guangdong, Hebei, Henan, Jiangsu, Liaoning, Shandong, Shanghai, Tianjin, Zhejiang — and their 66 cities — are exceptionally exposed. The average number of people who use these services and could be disrupted by the impacts of flooding stands at 103 million.

Drought, on the other hand, whereby a lack of water supply may result in suspension of energy production, could affect 6 million electricity users. The southern border of Inner Mongolia, Shandong, Shanxi, Hebei, north Henan, Beijing, Tianjin, south-west of Jiangsu — and their 99 cities — are especially at risk.

For those who live in “infrastructure hotspots”, critical services such as water and electricity supply could be at risk. This could mean more power failures, increased traffic jams and competition for water supply. The cost of electricity and running water will rise and mobility would be restricted.

Recognising the risks, the Chinese government is taking firm action both in mitigation and adaptation to combat climate change impacts.

Its Intended Nationally Determined Contribution on climate change, delivered to the UN last year, sets out stringent policies and measures to reduce emissions. Robust adaptation strategies are also planned. These include the improvement of disaster risk warning systems, the introduction of higher engineering standards for new infrastructure and the requirement for comprehensive climate risk assessments.

What about the reverse: to what extent China's infrastructure poses grave threats to the world climate?

Hu Xi is a doctoral student at the Environmental Change Institute, University of Oxford

How combatting climate change is good for our health

Climate change could do major harm to gains in human health, but taking strong action now will have huge benefits, according to a new study. Two of the report’s authors spoke to chinadialogue

Chinese cities most at risk from rising sea levels

China's fast-growing coastal megacities could be swamped by rising oceans as a result of climate change, with 145 million people under threat, says a report from Climate Central

China is feeling the force of a global rise in natural disasters, as a surge in flooding brings malaria and more.