The crushing defeat of the Venezuelan government in parliamentary elections held on December 6 has been interpreted as a turning point in the country’s self-proclaimed Bolivarian Revolution. Since 1998, 'Chavismo' – the movement named after former president Hugo Chavez, who died in 2013 – remained undefeated in regular votes, with its only major setback at the polls being the 2007 referendum defeat on constitutional reform.

During much of that period, China has provided loans totaling an estimated US$65 billion to Venezuela, most of which were in return for oil that is the mainstay of the country's economy.

With just 55 seats out of a total 167, Chavismo now finds itself with a clear minority in the new legislature, which will take shape on Tuesday. It is still too soon to know if the revolutionary force’s loss of sway over voters is terminal, or if this is a bump on the road to constructing the ’21st Century Socialism’ promoted by commander Chavez.

What is certain is that the parliamentary losses represent another huge challenge for Chavez’s successor Nicolas Maduro, president since April 2013, who is currently presiding over an economic crisis. Annual GDP is shrinking by 7%, the country’s deficit is equivalent to 20% of GDP, according to the UN’s Economic Commission for Latin America and the Caribbean (ECLAC), and Venezuela has the highest annual rate of inflation in the world at 200%, according to the International Monetary Fund.

With two-thirds of the representatives in the national assembly, from January onwards the opposition will be empowered not only to push legislation but also to remove government ministers, or even the vice president of the republic. Its absolute majority allows it to put forward a possible constitutional reform that would cut presidential terms or allow a recall referendum on Maduro within the next few months.

However, it is uncertain whether removing the president is a priority for the opposition, as nobody seems interested in taking the reins of a country in chaos. Until now, voices from the opposition’s Roundtable for Democratic Unity (MUD in its Spanish abbreviation), have insisted only on an immediate amnesty law for the country’s 70 registered political prisoners and, above all, restoring parliamentary control, which has been elusive over the last 10 years of Chavista majorities.

Two-time opposition presidential candidate and governor of the state of Miranda, Henrique Capriles Radonski, has proposed what he calls a “Padlock Law” to put an end to the aggressive oil diplomacy which has seen the Caracas government exchange shipments of crude for political favours (or goods and services). The case of Petrocaribe, a regional cooperation agreement through which Venezuela offers member Caribbean nations substantial discounts on oil, is perhaps the most salient. For years this mechanism guaranteed the Chavez government the support of small Caribbean countries in international organisations.

It is estimated that around US$13 billion per year goes towards this kind of agreement and Caracas sacrifices a similar amount  domestically on subsidising the price of fuel, principally oil, which has stayed at the same price since Chavez began his presidency in 1999. Now these same financial pressures are jeopardising the Bolivarian Revolution and placing the country on the verge of a humanitarian crisis. Subsidies are expected to be revised.

A large part of the debt Venezuela has accrued with China is repaid with oil. In the absence of official figures, it is estimated that 300,000 of the 900,000 barrels of crude that leave Venezuela for Beijing every day serve as debt repayment and the proportion is rising as production declines – one of the reasons for country’s current liquidity crisis.

Vice finance minister Simon Zerpa recently revealed that China’s finance flows to Venezuela had hit US$53 billion. The revelation was made at the beginning of December, just days before the election, and illustrates the type of relationship that the Chavistas have cultivated with Beijing.

State television broadcast live the arrival of 2,500 taxis made by Chinese manufacturer Chery at Puerto Cabello, the country’s largest port. The cargo represented just a fraction of the 10,000 vehicles which cost US$453 million and which have been allocated to public officials.

Almost simultaneously, Maduro inaugurated an assembly plant for Yutong buses in the mid-west of Venezuela. Another Chinese firm, Haier, is the official sponsor of the programme ‘Mi Casa Bien Equipada’ (My Well-Equipped Home in English), through which the government distributes electrical appliances to certain sectors of the population at heavily discounted prices.

Apart from providing merchandise through clientelist aid programmes, China has become a vital short-term lender for Venezuelan accounts. Successive disbursements of US$5 billion have been arriving since 2014. The most recent, in September, was to finance state-owned oil company PDVSA, which is closely linked to public accounts.

Zerpa neglected to explain whether the announced amount of debt relates to the resources injected into the China-Venezuela mutual fund, created in 2008, or if it relates to all the finance mechanisms opened by Beijing.

Either way, these conventions are unclear and this was not lost on economist José Guerra who, on being elected as an opposition deputy for Caracas on 6 December, announced his intention to review the China deals. “We’re going to demand the China accounts,” said the former head of research at the Central Bank of Venezuela in an interview.

“The state of the agreements and the trade relationship with our allies needs to be clarified, the figures can’t be covered up. How much have we borrowed and is the rate explicit or implied? And what are the conditions? The Chinese are interested in clarifying this for us, the majority, so that the relationship remains on good terms,” said Guerra, adding: “China is a commercial ally of Venezuela and we want to maintain these relationships.”

It seems unlikely that the opposition would want to cut off one of the few sources of finance available to Venezuela at a critical time for the country’s economy. For its part, China is not just interested in recovering debts, whether in cash or oil, but in preserving a consolidated market for exports of finished goods.

The political panorama promises to get even stranger in Venezuela with the opposition’s parliamentary majority. Following its defeat on 6 December, the first signs from government indicate that its intention is to block any initiatives in the national assembly, either by using the Chavista-controlled Supreme Justice Tribunal, or legal subterfuge.

The expected power play could lead to institutional paralysis or the definitive collapse of the precarious Venezuelan economy, a nightmare scenario for Chinese creditors and one which would leave them with few places to turn to recover their loans.


This article was first published on Diálogo Chino. Read the original here.

Untapped wind and solar resources provide opportunities for China, but lack of national policies on renewables in some countries may be an obstacle

A new book shows how Latin America is shaping China’s foreign policy, but ignores China’s impact on the environment and people of the region itself 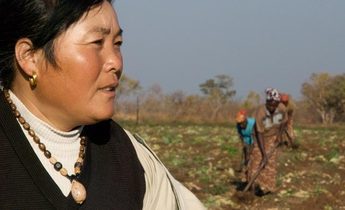 Chinese loans to Africa could trigger another debt crisis

Does a post-Chavez Venezuela threaten Chinese mining and oil deals?

With Chavez gone, so may be the days of preferential resource contracts for Chinese firms