Six celebrities become zookeepers and get up close and personal with wild animals in “Wonderful Friends,” a show being aired nationwide by Hunan TV, which has made a name for itself as China’s front-runner channel for adventurous reality TV formats.

Wildlife conservationists and lawyers want the programme scrapped, saying it is cruel to animals, dangerous to animals and people, misleading, and money-grubbing.

In the show, singers, actors, and TV hosts, better known for wild lifestyles than wildlife, kiss zoo animals, take chimpanzees clothes shopping, give an elephant a pedicure, and have been bitten and trodden on in turn. Some Internet users have hailed a new era of “cruelty to celebrities.”

Conservationists and lawyers say the show breaks China’s animal protection laws (which are far from draconian) and is a test for the credibility of a recent ban on “all types of animal performance” in zoos, under 2014 rules issued by the Ministry of Housing and Urban-Rural Development.

The producers say the show is entertaining, educational and of public value as it encourages animal protection. Love of animals inspired, and informs, the show, they claim.

Despite repeated attempts by chinadialogue to contact Chimelong Animal World, where the show is filmed, there was no response by the time of publication.

“There is ample legal basis on which to have the show halted,”An Xiang, public interest lawyer and head of Beijing Dexiang Law Firm, told chinadialogue.

The current wild animal protection law restricts the sale, purchase and use of Class 1 protected animals or animal products to “special purposes” of scientific research, breeding and training, and exhibition, which An says does not include television entertainment. These activities require a license from the appropriate government department, said An.

Wonderful Friends features Class 1 protected species like chimpanzees and elephants that can only be used with approval from the State Forestry Administration (SFA), yet it is unclear if approval has been granted, An said.

When chinadialogue contacted the Conservation Department and Press Office of the State Forestry Administration (SFA), staff said they were unaware of the show, and hence of any issues arising from it.

Opponents of the show are also raising concerns about human health. The deadly SARS outbreak in 2003 and fears over risks to humans from bird flu mean China’s health authorities and the WHO are anxious prevent transmission of diseases from animals to humans. A celebrity could give a chimpanzee a cold, or vice-versa, said Xie Yan, a zoologist with the Chinese Academy of Sciences.

Four pandas recently died of distemper, prompting a communique from the State Forestry Administration saying,“Close contact between tourists and rare wild animals is forbidden,” and mandating regular health checks for staff and keepers.

Yang Hua, a spokesperson for the wildlife park’s parent company, told thepaper.cn that the celebrities were intern zookeepers not tourists. Conservationists say this is merely playing with words to evade punishment.

“You can see right away they aren’t professionals,” said one vet and wildlife protection worker who asked to remain anonymous, citing how a celebrity climbed a ladder to bring a koala down from a tree in a way which could harm the animal’s ligaments and joints.

Animal enclosures are often dark, especially for nocturnal creatures, and flash photography is forbidden. But Hunan TV needs extra lighting to film, which could harm the animal’s vision, and even cause blindness, according to the vet. Other risks include stress brought on by the presence of large numbers of people during filming, which could affect animals’ sleeping and eating patterns: “That alone is reason to halt filming,” the vet said.


For instance, a rare white tiger and its newborn cub were filmed in their enclosure, although big cats such as tigers are nocturnal.

The vet said that “the show is much more about entertainment than education, and what educational content is present is incorrect,” as viewers may believe that wild animals can be kissed and stroked.

Wang Hui, head of animal welfare for the Animals Asia Foundation, pointed out that baby chimpanzees and orangutans originate on different continents – chimpanzees in Africa, and orangutans in Asia - so are used to entirely different environments. Chimpanzees spend most of their time on the ground, while orangutans hug tree branches. Yet they were placed together in a concrete enclosure with six celebrities:“To make a TV show they put completely unrelated animals together."

Another concern is the harm caused by handling young animals. Even in captivity, youngsters should not be separated from their mothers and group, yet baby chimps were bottle-fed by celebrities on camera, putting them at risk of “trouble reintegrating with the group,”Wang said.

Animals wore clothes to make them look cute. Xie objected to putting chimps in nappies:“Humans might need to wear clothes, but animals don’t.”

The celebrities display genuine affection for the animals – indeed, the most famous participant is singer Li Yuchun, who is an advocate for WWF, and IFAW.

“If you really love animals, make some shows about how to rescue them, rather than use them for entertainment,”agreed Zhou Haixiang, director of Shenyang Ligong University's Ecology and Environment Research Office.

According to these experts, Wonderful Friends counts as a performing animal show, something that was banned under the 2014 ruling that brought China in line with regulations in other countries. China is revising its wild animal protection law to reflect greater public awareness of conservation issues, and a new draft law is expected at the National People’s Congress that opens on March 5.

Xie wants the show should be halted, fearing that its format will be copied. Others underscored the need for careful planning and expert consultation before filming with animals.

Rejection by the public is “inevitable” unless Hunan TV “calls a halt to the show and no longer cooperates with companies which harm animals for profit,” said Feng Yongfeng, a spokesperson for the NGO Nature University.

Protesters in animal masks recently handed in a letter to the media regulator calling for the show to be halted and a ban on animal performances on the annual Chinese New Year TV gala.

AAF's Wang told chinadialogue that shows based solely on close contact between humans and animals do not exist in Europe and the US. Animals are used in movies. However, companies that overstep the line on animal welfare issues face public anger. For example the UK’s X-Factor talent contest asked contestants to swim with dolphins, but did not broadcast follow-up content after both the public and animal welfare groups expressed outrage. 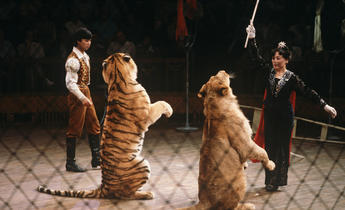 The suffering of China’s circus animals

The first performance of killer whales in a Chinese aqua park will likely prompt demonstrations from activists, who warn that an increasing amount of wild animals will end up in inhumane conditions

China is working on a revised version of its Animal Protection Law – a law which experts say treats wild animals as resources and has failed to halt their slaughter.

The response to Jack Ma’s hunting trip reflected an eagerness to blame and an ignorance of the facts, says chinadialogue’s Beijing editor Liu Jianqiang, as he reflects on 2014