Without improvements in education and innovation, China will struggle to compete

For sustainability watchers, China is a very confusing country to follow. On one day, it is building a coal-fired power plant per week. On another, it is implementing the largest reforestation project in the world, albeit with mixed results. It is leading the world in wind and solar PV equipment output which in theory is great for reducing the cost of low-carbon technologies, but it is blamed for distorting the market through state subsidiaries.

The prospects of a better future depend on shifts in Chinese government policy, both from a ‘carrot and stick’ perspective. In terms of the former, what's needed is to educate and incentivise sustainable behaviour by individuals and businesses. With regard to the latter, there must be better regulation of unsustainable behaviour, and penalties for offenders who break the regulations.

If these can be called the ‘seeds’ of sustainability in China, then how is it faring, compared to the rest of the world?

By outsourcing manufacturing activities to China, companies from all over the world have been able to continually drive down costs and provide consumers with more choice. As a result, China’s economic growth has been built on highly energy intensive activities.

For many countries, the way to reverse this situation is to restructure from a labour and heavy industry-based economy to a knowledge-based economy. Selling ideas, services, technologies and skills are much more ‘value-add’ activities than basic manufacturing and much less energy intensive. However, this requires a long term commitment to research and development and a habit of innovation.

One of the best indicators for energy intensity is to look at how much energy is consumed to generate US$1 value of GDP. Over the past 5 years, China has reduced its energy intensity per unit of GDP. However, it still has a long way to go to catch up to energy efficient countries such as Germany and Japan.

The Chinese government recognises the importance of this metric, and has set an ambitious energy intensity reduction target of 16% in its current Five Year plan (2011-15).

Although China’s energy intensity is decreasing, the rate of decrease is dropping; even the most optimistic scenarios are saying that it will take China 20 years to reach the energy intensity levels of Germany and Japan. However, if the rate of decrease continues to decline, it may take 40-50 years, if not more (or at all), for China to reach those benchmark levels. One thing for certain is that at some point, a fundamental shift in the economy is needed, and China’s current emphasis on investing in energy-intensive industries will need to be corrected.

‘Sustainability’ in the curriculum

To remain competitive in the global market, Chinese suppliers and business owners increasingly need to incorporate sustainability into their business thinking.  But are the future business leaders of China being taught the values and benefits of sustainability, especially in management?

Compounding the problem is that the research also showed that Chinese business schools mainly relied on textbooks and assignments as teaching approaches; on the contrary, the US business schools focused more on discussion and case studies as teaching approaches. Studies have shown that students learn more effectively if given the freedom to critically engage topics at a practical level, often through case studies.

However, to incorporate sustainability thinking into their education curriculum, China will need to overcome the barriers to change, such as the lack of facilities and capacity among key personnel in business schools.

The ability to innovate plays a critical role in strategic thinking and design. In an article in the Harvard Business Review, Michael Porter and Mark Kramer point out that by reconceiving products and markets, redefining productivity in the value chain and enabling local cluster development, companies can create shared value.

There are two statistical indicators that we can use to measure innovation. One is the propensity to patent, which is measured by the number of triadic (related) patents families filed per million population. The other is the R&D intensity, which measures the ratio of gross domestic expenditures on R&D to GDP.

In terms of R&D as a percentage of GDP, China stands at 1.77%, which puts it middle of the pack in the same OECD study. It still significantly trails the leaders, who spend in excess of 3% of GDP on research and development activities. See the chart below: 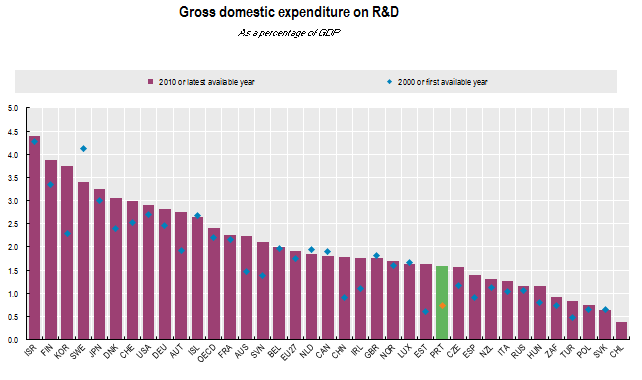 The propensity to patent indicator may be distorted due to the disproportionately large population of China, half of which are rural, and that China’s R&D as a percentage of GDP has steadily increased over the past 10 years. Nonetheless, it paints the rather sobering picture that China is far from being an innovative country at present. It also shows that in the short and medium term, China will still rely heavily on imported western technologies in its transition to a more sustainable economy, from cleaner coal burning technologies, waste water treatment technologies and more efficient manufacturing machinery.

Outsourcing pollution is not a solution - Solutions are still needed!

China cannot follow the path of Germany and Japan who reduced their emissions per GDP by outsourcing manufacturing. Shifting the problem to elsewhere is NOT a solution to pollution. We should stop portraying that as "progress".

Now we have to solve the problem and manufacture what we (really) need in an intelligent way without fossil energy and without pollution. That is a challenge in the field of design and innovation both in China and elsewhere.

John Hsu is an expert in sustainability data, metrics, strategy and solutions.

Some businesses will not survive the shift to a sustainable economy

Environmental reporting in China still likely to be greenwash

Can China break its carbon lock-ins?

The government has been paying farmers to convert their land to forest, but an end to those payments could mean recent environmental gains are lost

Nothing should stand in the way of emissions cuts, economic restructuring and new policies to tackle climate change, says Jiang Kejun, from the National Development and Reform Commission

Can activist shareholders drive a new era of sustainable investment in China?

With its reputation in tatters following the 2008 crisis, the financial world is being shaken by a push for more socially and ecologically responsible investment. Will Chinese shareholders be next?

Chinese banks under “almost negligible” pressure to protect the environment

Companies and officials get blamed for pollution incidents, but rarely the financial bodies that lent the money, says senior state researcher Yuan Qingdan