Although China has ambitious nuclear energy plans, its plan for high-grade uranium ore resources is in its infancy. One option is to reprocess fuel that has already been used in its reactors (“spent fuel”) and to extract the plutonium and the uranium that has not undergone fission. This could then be used to produce mixed-oxide (MOX) uranium-plutonium to power either currently operating light water reactors or a future generation of plutonium breeder reactors, thereby reducing the need for uranium.

Accordingly, in April of this year, the China National Nuclear Corporation and the French AREVA Corporation announced their intention to build a used fuel “reprocessing” facility in China capable of treating 800 metric tons of used fuel per year.

The problem with this strategy is that reprocessing spent fuel isn't economically viable and offers no significant environmental benefits. While the term 'reprocessing' might seem similar to 'recycling', it is by no means as eco-friendly. Except for the plutonium and uranium, all the radioactivity present in the spent fuel is redistributed among different waste streams which will eventually enter the environment.

Reprocessing therefore is not a solution to the problems inherent to dealing with radioactive waste. The other way to deal with spent fuel is to directly dispose of it in geological repositories. These are basically tunnels about 500 meters underground that hold containers with nuclear waste. Reprocessing does not eliminate the requirement for a repository or even reduce its size much. This is because the HLW, which contains practically all the long-lived radioactive elements present in the spent fuel, will still have to be disposed of in a geological repository. In addition, there will be spent MOX fuel as well as plutonium waste from MOX-fuel fabrication.

The second problem with reprocessing is the huge expense, starting with the cost of constructing the reprocessing facility. Japan’s $20 billion (¥2.19 trillion) Rokkasho Reprocessing Plant, which was designed by AREVA, is a candidate for the most expensive single industrial facility in history. If it weren’t bad enough that it overran its construction budget (in 1989 an estimated $6.9 billion (¥760 billion), it failed to open in 2008 due to technical problems, and at the time of writing still isn't active. Japan’s Atomic Energy Commission has estimated that if the plant operated for 40 years, it would actually increase the cost of nuclear power in Japan by ¥10 trillion ($100 billion) more than if Japan simply stored its spent fuel.

Today, the cost of uranium only accounts for about 3 percent of the cost of nuclear power and the world is in no danger of running out of low cost uranium. Even if a utility were forced to pay much more for uranium, it would still be more economical than using MOX fuel.

If MOX fuel were to be used in breeder reactors to produce more plutonium—a common goal for reprocessing programs—then the economics are even more adverse because of the higher capital costs associated with breeder reactors. A 2010 report by the International Panel on Fissile Materials examined the efforts to commercialise fast breeder reactors in six countries and showed how cost and reliability problems defeated these efforts. As a result, their development has been abandoned in Europe, Japan and the United States. France gave up on breeders and is using its separated plutonium in light water reactors, resulting in a cost increase for nuclear power (According to an official report to the French Prime Minister in 2000, the cost increase over a 45-year life for France's current nuclear power reactors would be 166 billion French Francs, which I translated to around $34 billion. See Appendix: Managing Spent Fuel in the United States: The Illogic of Reprocessing (International Panel on Fissile Materials).

If China goes ahead with its plans for reprocessing, it could end up the prisoner of a costly and inefficient programme for dealing with spent fuel. The political scientist William Walker has used the term “entrapment” to characterise the British government’s inability to extricate itself from the operation of the costly and inefficient Thermal Oxide Reprocessing Plant at Sellafield for more than twenty years, even though there was a “radical change in the market for its products” and direct disposal had come to be seen as advantageous (For an excellent book on the politics involved see: William Walker, Nuclear Entrapment: THORP and the politics of commitment, Institute for Public Policy Research, 1999).

The nuclear fuel managers of Japan’s three largest facilities told one of us in 1993 that they too would like to abandon reprocessing but had been “trapped” by the agreements that they had made with the national government and the local governments that hosted their nuclear power plants. The French national utility, Électricité de France, is fighting to reduce the high costs of its reprocessing contract with AREVA. It would therefore be wise for China to eschew reprocessing spent fuel.

M. V. Ramana is with the Program on Science and Global Security at Princeton University. Ramana is a member of IPFM and of the Science and Security Board of the Bulletin of the Atomic Scientists and the author of The Power of Promise: Examining Nuclear Energy in India.

Frank von Hippel is with the Program on Science and Global Security at Princeton University. Hippel is the co-chair of the International Panel on Fissile Materials (IPFM) and co-author of Material Dangers, to be published by MIT Press.

Nuclear waste: the 270-tonne legacy that won’t go away

Governments want to bury their nuclear waste deep underground, but finding a place to dig the hole is proving tricky. 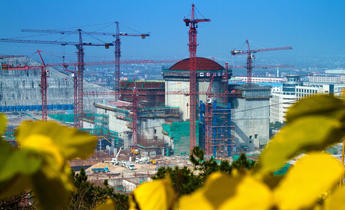 China is heading for a nuclear accident if it continues with current construction plans, says former state nuclear physicist and prominent critic He Zuoxiu

China unlikely to be shining light for nuclear

Nuclear power can only survive if it’s competitive with alternatives. Even with China in the market, that’s unlikely