Two years ago a massive landslide devastated Pakistan’s Hunza Valley. People in the region remain stranded even now and not enough has been done to prevent future calamities.

Two years ago this week, as 2010 was getting under way, a huge landslide changed the landscape of the remote valley of Hunza in the Karakorum mountain range of northern Pakistan. The landslide fell across the Hunza River at a place called Attabad, forming a dam approximately 1,200 metres long, 350 metres wide and 125 metres deep, destroying part of the Karakorum Highway – a vital road link between Pakistan and China – and killing 19 people.

The Hunza River was completely blocked for five months, creating a massive lake now called Lake Gojal. The rising waters inundated several villages and eventually submerged 22 kilometres of the Karakoram Highway. Some 25,000 people were displaced. Two years later, these communities remain cut off from the rest of the country.

A dam-breach study conducted by consultancy firm National Engineering Services Pakistan (NESPAK), and presented to the National Disaster Management Authority (NDMA) two months after the disaster, proposed the excavation of a channel 24-metres deep and 45 metres wide, to drain water from the lake. But the channel constructed by the Frontier Works Organization of the Pakistan army was only 15-metres deep; and so when water was eventually drained in May 2010, not enough water could be removed to significantly impact the size of the lake.

The dam and the lake have now become a permanent geologic feature in the landscape; though the faint threat that the lake could burst and cause catastrophic flooding remains.

Historically, Asia has been severely affected by the ongoing collision of the Indian and Eurasian continental plates. The collision of these two plates resulted in the formation of Tibetan Plateau, the Himalayas, Karakoram, Pamir and Hindu-Kush mountain ranges, and created large fault lines and deep cracks in the foothills of the mountains. Geologically, this region is one of the most complex landscapes in the world, exhibiting a great variety of rock types and structures.

Geologists say that the mountains around Attabad are very unstable due to erosion and weathering processes, seismic activity, steep terrain, snow melt, rainfall and irrigation for agriculture, and sediments carried by glacial melt into rivers. The 6.3-magnitude earthquake that struck Kashmir’s Astore Valley in 2002 caused cracks to emerge on the back-slopes of the mountains surrounding Attabad, and is believed to be one of the key triggers of the landslide.

A second major displacement was observed in 2004, when the existing cracks extended into the cultivated fields and populated areas of Attabad and the mountains slopes became unstable and prone to landslides. The 7.6-magnitude earthquake that struck Kashmir in 2005 further accelerated the slope movement and networks of cracks destroyed several houses.

The Geological Survey of Pakistan (GSP), the country’s central engineering agency, conducted a risk analysis of the area in August 2009, warning in their report: “a fault is passing through the affected area having a north-south direction and crossing the river. A huge landslide has developed across the river. This landslide is associated with the fault. The bed rock is highly fractured, sheared and jointed due to the tectonic activity in the area.”

The experts warned of rockslides and said mountain slopes had become unstable in many places, further widening fissures and increasing the occurrence of landslides. Water from rain, snow melt and irrigation collected in fissures, accelerating erosion processes and greatly increasing the vulnerability of already unstable mountain slopes. On the basis of these studies, Attabad was declared a high-hazard area. The GSP suggested that local authorities evacuate residents from the vulnerable area and monitor hazards during the winter and snow melt season.

As predicted, on January 4, 2010, a huge landslide occurred, destroying the village of Attabad, damming the Hunza River and affecting 25,000 people in the 21 villages upstream. With roads still blocked, these communities remain cut off from the rest of Pakistan today.

The valleys of Gilgit and Hunza have a spectacular beauty that no visitor can ever forget: the sight of stunning orchids, fragrant and colourful; trees laden with apples, peaches and apricots; and ripe corn the colour of gold on the hill terraces and slopes. The leaves of the trees show off a hundred different shades of green and red, from palest pistachio to flaming crimson. But, for as many as 21 villages in Hunza, post-landslide reality is not quite so picturesque.

After the Attabad disaster, four villages – Ainabad, Shishkat, Gulmit and Gulkin – were completely submerged. Apple orchards with trees hundreds of years old, Buddhist relics, mosques, temples and wooden houses with their carved pillars all drowned in the lake.

The army evacuated local people and temporarily moved them to Ghizar Valley, which is also at high-risk of similar landslides. These people have been left heartbroken, their lives disrupted beyond repair and the once life-sustaining river turned into a giant lake, gulping and swallowing everything with its rising waters.

On top of other damage, the landslide blocked the Karakoram Highway, a vital trade link to China, cutting off 25,000 people in upper Hunza Valley. To date, the debris has destroyed an almost three-kilometre stretch of the highway and 20 kilometres of road – including a 250-metre long strategic bridge – submerged by the lake.

People in the upper Hunza Valley are still braving these problems, and no solution is in sight. The landslide has caused irreparable loss to the area, submerged cultivable lands, eroded great parts of the Karakoram Highway and squeezed the flow of tourists. In short, economic activities have ground to a halt.

According to the federal communications minister, the blockage of the Karakorum Highway has caused multimillion-dollar losses for Pakistan in trade with China. China’s total trade with Pakistan is US$4.26 billion and most of the trade is carried out along this route. But since 2010, trade has fallen by 90%. Chinese experts have carried out a detailed survey of the area and given Pakistan’s government two potential plans to retrieve the submerged highway, costing US$600 million (3.8 billion yuan) and US$270 million (1.7 billion yuan) respectively. But a lack of funding has stopped these projects moving forward.

The cheaper project involves digging a six-kilometre long tunnel, six high-rise bridges and 70 small bridges and will take six years to complete: clearly a tall order for a country like Pakistan with its struggling economy and limited expertise. In June 2011, the federal government allocated a small sum of US$1.7 million (10.8 million yuan) to realign the Karakorum Highway and the barrier lake. But the speed of work has been painfully slow and to date only 10% of the work has been completed.

Meanwhile, according to local news outlet Pamir Times, the mountain slopes around Miachar village, in the Nagar Valley located above the Hunza River, have become seismically active, posing serious threats to the life and property of around 380 households. Local people fear a massive rock avalanche may create a landslide dam over the Hunza River here as well.  There is anecdotal evidence of earlier massive rockslides blocking the Hunza River: in 1908 and again around 1937 at a place called Hakuchar, close to the vicinity of Miachar village.

A recent study by Focus Humanitarian Assistance Pakistan also suggests that the region remains vulnerable to another large landslide. A comprehensive scientific study of Miachar, Hakuchar and other active sites in the area is urgently needed to assess the current situation and take preparatory measures.


Noreen Haider is a journalist based in Pakistan.

1. An NGO called Focus Humanitarian Assistance had evacuated Atta Abaad with the help of local administration long before the Geological Survey of Pakistan woke up from its deep slumber. FOCUS has made the predictions and the studies are available on line in the public domain. GSP came at a later stage, around August 2010, when the village had, by and large, been evacuated.

2. Not a single "temple" drowned in the lake. Do you know why? Because hundred percent of the population comprises of Muslims and there is no temple in the region

3. The lake is 22 kilomtetre long, starting from Altit and extended up to Hussaini (covering the entire lenght of five villages).

I think the writer should have carried out a bit more research, to ensure accuracy.

Response to "some corrections please"

Thank for your helpful comments and pointing the crucial role of NGOs. In response to your other points: First, GSP did carry out a risk assessment in August 2009 (the report is available here - http://www.scribd.com/doc/60307835/Report-of-Geological-Survey-of-Pakistan-in-Pre-Disaster-Period-of-Hunza-Attabad-Landslide) ; second, there are remains of Buddhist temples in the area, even if the population are now Muslim; and third, local Media reports say four villages were submerged (http://tribune.com.pk/story/98849/attabad-landslide-lake-one-year-on-the-threat-is-still-looming/) . If this is incorrect could you please provide a source and we will make the necessary corrections.

Battle of a Himalayan village

A remote Nepali community is struggling to save its unique Buddhist culture from glacial lake floods. Navin Singh Khadka reports.

Shelving a vital project to monitor melting Himalayan ice will impede our ability to understand these changes and prepare for the consequences, argues Athar Parvaiz. 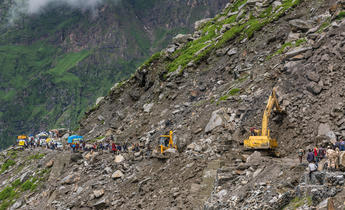