The ongoing spread of Covid-19, which is thought to have originated from a wet market in the Chinese city of Wuhan, is focusing increased attention on human interactions with wildlife. In February, scientists pointed to pangolins as a possible source of the virus, although new research has now questioned this link. The critically endangered mammal, most likely illegally smuggled into China for use in traditional Chinese medicine and as bushmeat, was one of many wild animal species thought to be on sale in the Wuhan market.

As part of their response to the virus, the Chinese authorities rushed in a temporary ban on the consumption of all wild animal meat. The prohibition is expected to be included in revisions to the country’s Wildlife Protection Law later this year. But it does not apply to wild animal parts used in traditional Chinese medicine or ornamental items. It also does nothing to mitigate the myriad other threats facing wildlife across the world as a result of human activity – the demand for exotic pets, the use of wild animals for entertainment and the destruction of habitats.

A new book, published bilingually in English and Chinese late last year, seeks to raise awareness of all these issues in an effort to end wildlife crime within our lifetimes. Photographers Against Wildlife Crime

is an eye-opening collection of over 130 images by some of the world’s best-known wildlife and environmental photographers.

Originally published in English in 2018, the new bilingual version is affirmation of the central role China could play in global efforts to protect wildlife. Chinese demand is one of the main drivers behind global trafficking in wildlife and wild animal parts, which photographer Britta Jaschinski calls “the world’s fourth largest organised crime”. Ending this trade is key to determining what naturalist David Attenborough, quoted in the book, calls “the fate of all life on the planet”.

Below are some of the photos that make this collection so special. 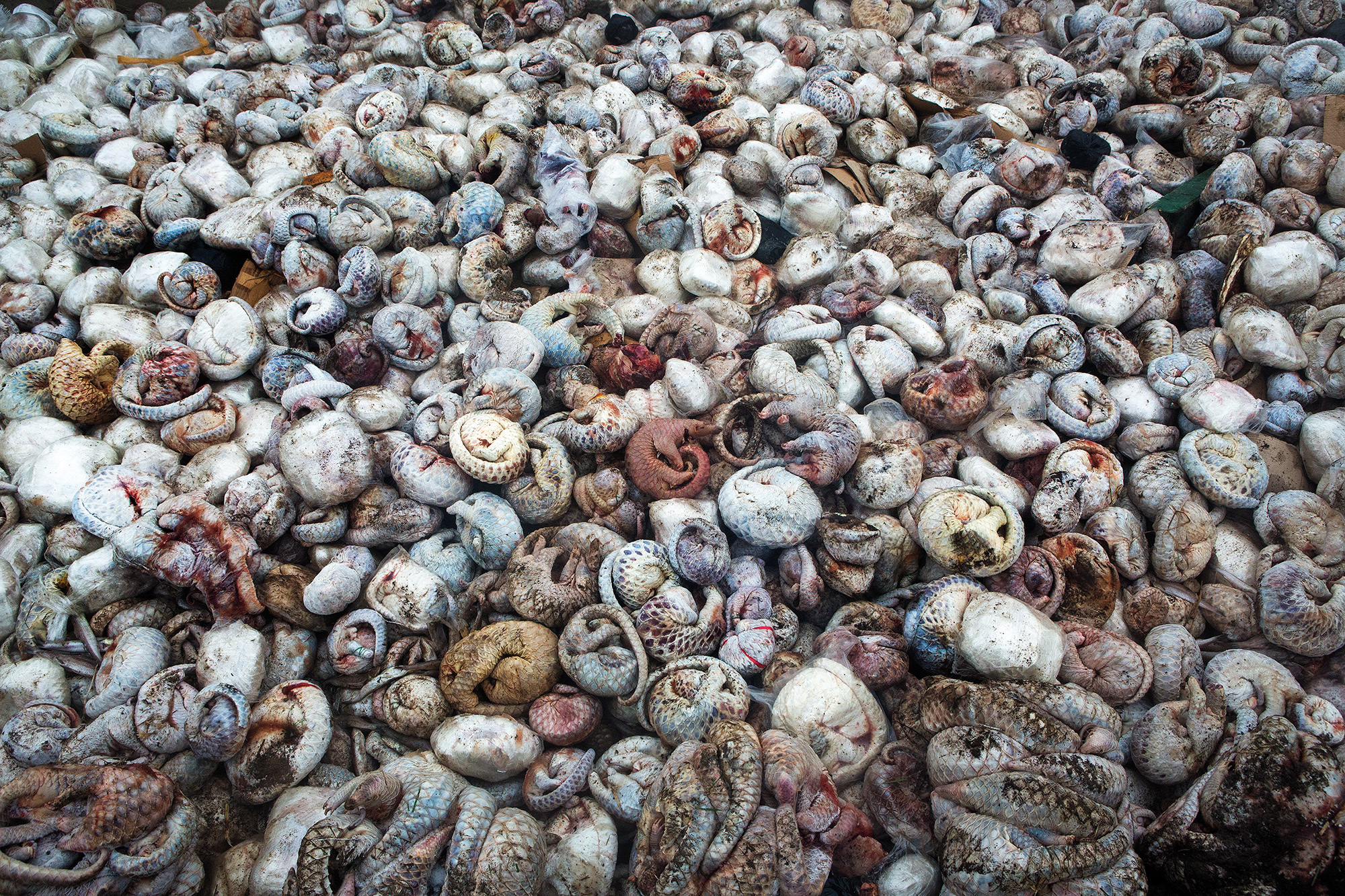 The bodies of approximately 4,000 pangolins defrost after being seized at the port of Belawan in Sumatra, Indonesia. Hidden in a shipping container behind a façade of frozen fish, it’s thought the animals were on their way to China and Vietnam, where there is high demand for their meat and scales. Pangolins are thought to be the most trafficked mammal in the world. All eight species are targeted by this illegal trade, and three are now considered critically endangered, including the Chinese pangolin, once widespread across southern China and parts of Southeast Asia. This seizure of the animal, made in 2015, is one of the largest on record. (Image © Paul Hilton) 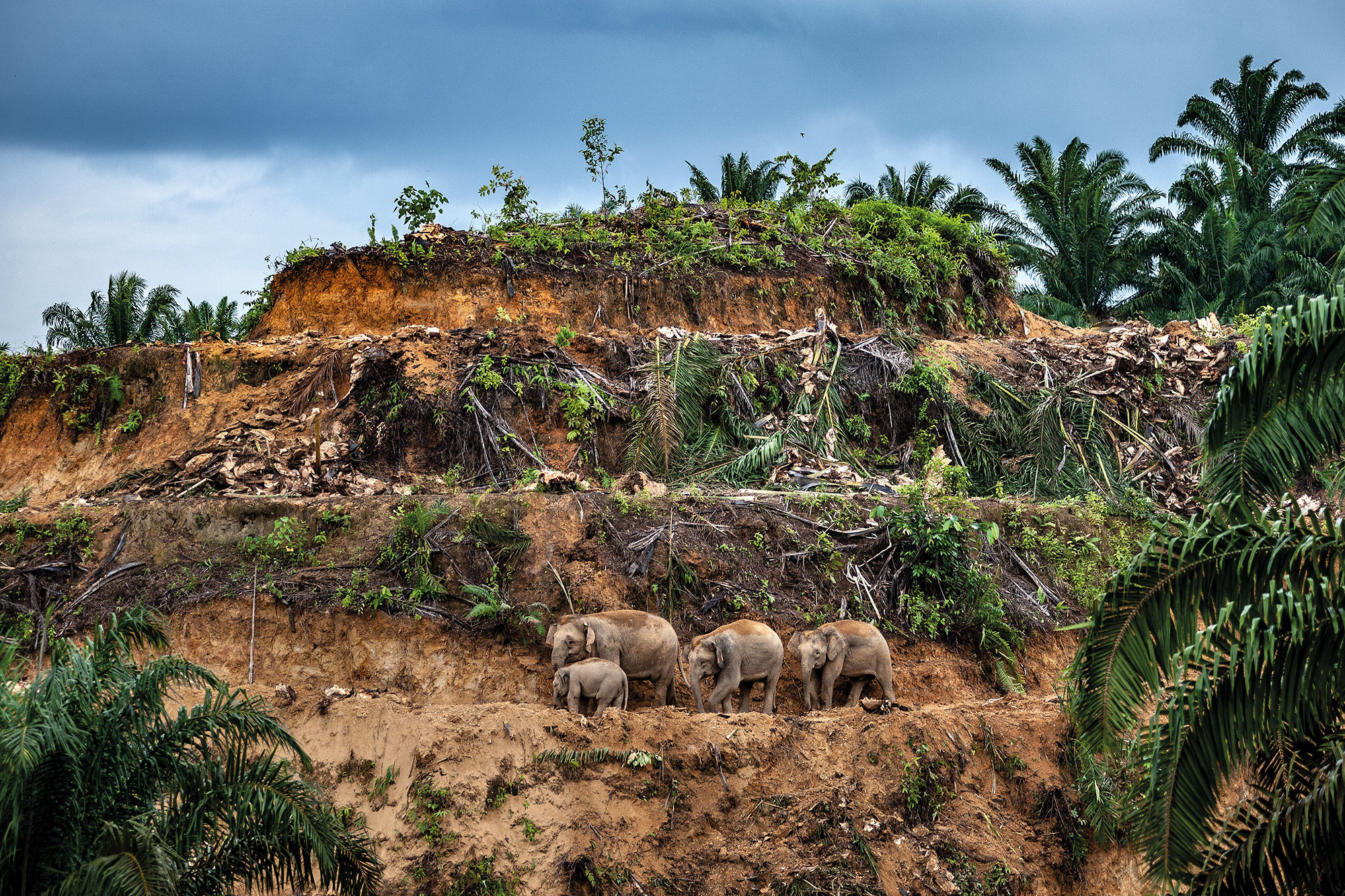 A family of Bornean elephants edge their way along the terraces of an oil palm plantation being cleared for replanting in Sabah, Malaysian Borneo. A sub-species of the Asian elephant, there are thought to be fewer than 2,000 Bornean elephants still left in the wild, the result of widespread deforestation. Malaysia is the world’s second largest palm oil producer – much of the state of Sabah has already been cleared of its rainforests to make way for oil palm plantations. The elephants often wander into these plantations to feed, where they come into conflict with humans and can sometimes be shot or poisoned. (Image © Aaron Gekoski) 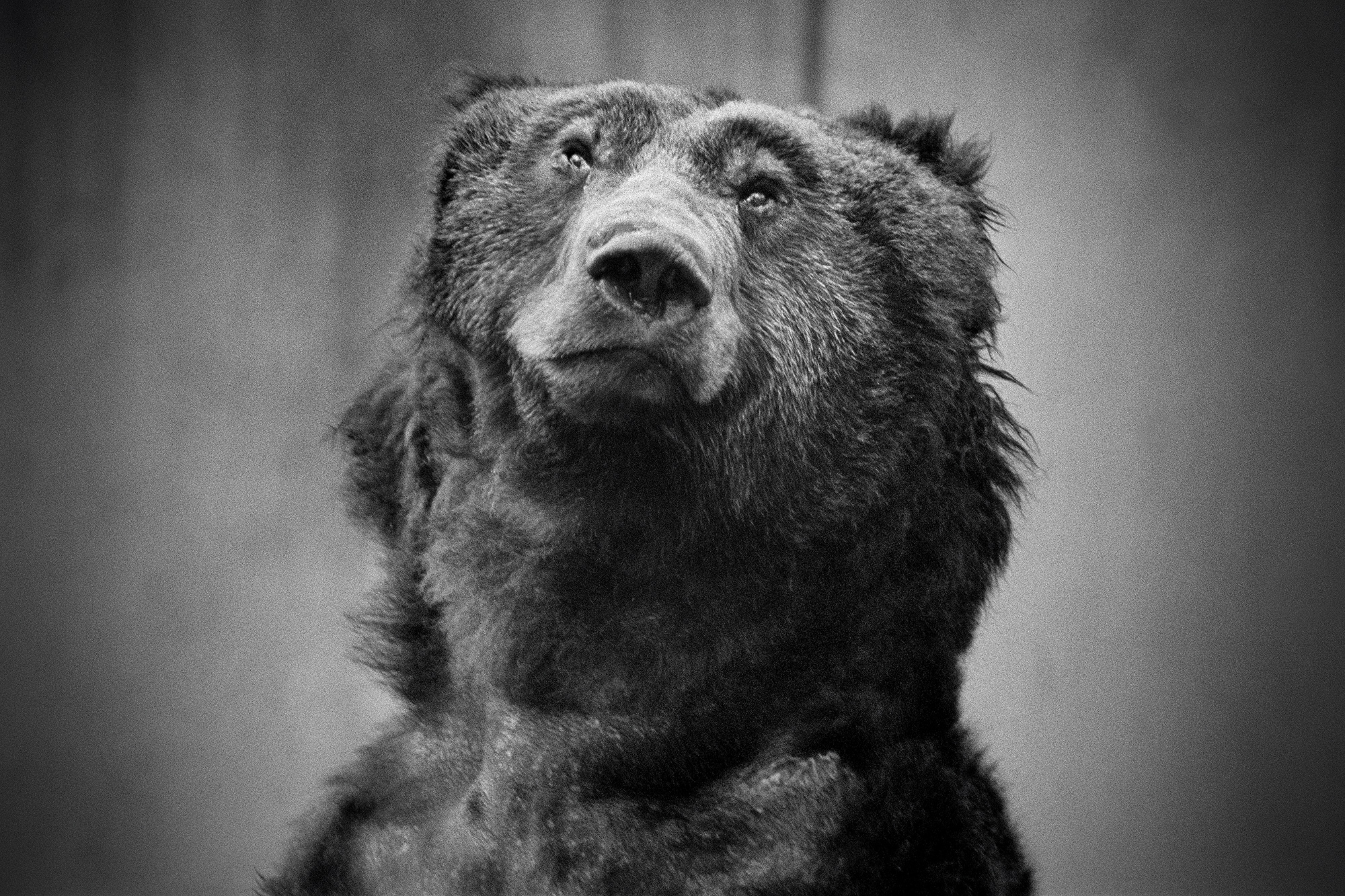 Named Oliver by his rescuers, this brown bear spent 30 years trapped in a small cage on a bear bile farm in China’s Shandong province. He was rescued in 2010 by the NGO, Animals Asia, and spent the last four years of his life in comfort at their Bear Rescue Centre in Chengdu, Sichuan province. Bear bile is an ingredient in traditional Asian medicines and is extracted from living bears via a number of techniques, including the insertion of permanent catheters. Vietnam made extraction illegal in 2005, and in 2015 pledged it would


end the sale of bear bile products by 2020. The same has not happened in China, where bear bile farms and products are still legal. There are regulations aimed at improving conditions for bears on Chinese farms, but it’s thought these are rarely followed or enforced. (Image © Britta Jaschinski) 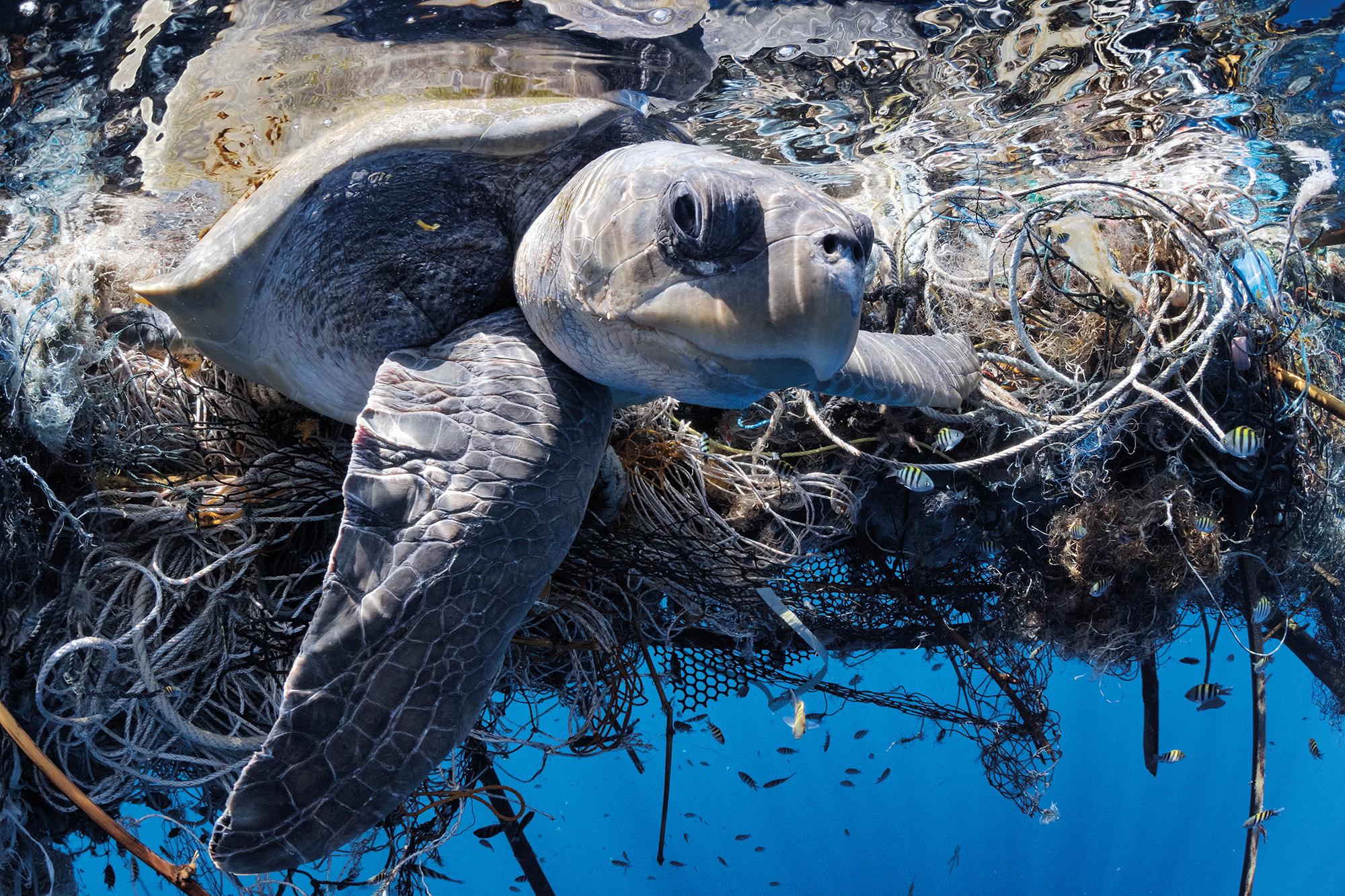 Discarded fishing nets, known as “ghost nets”, pose a significant threat to marine life. Tangling with other gear, they create floating islands of waste that can travel for thousands of miles. This olive ridley turtle was found caught in ghost nets in the Indian ocean. She was successfully released, but the mass of nets was too large to be removed. (Image © Tony Wu) 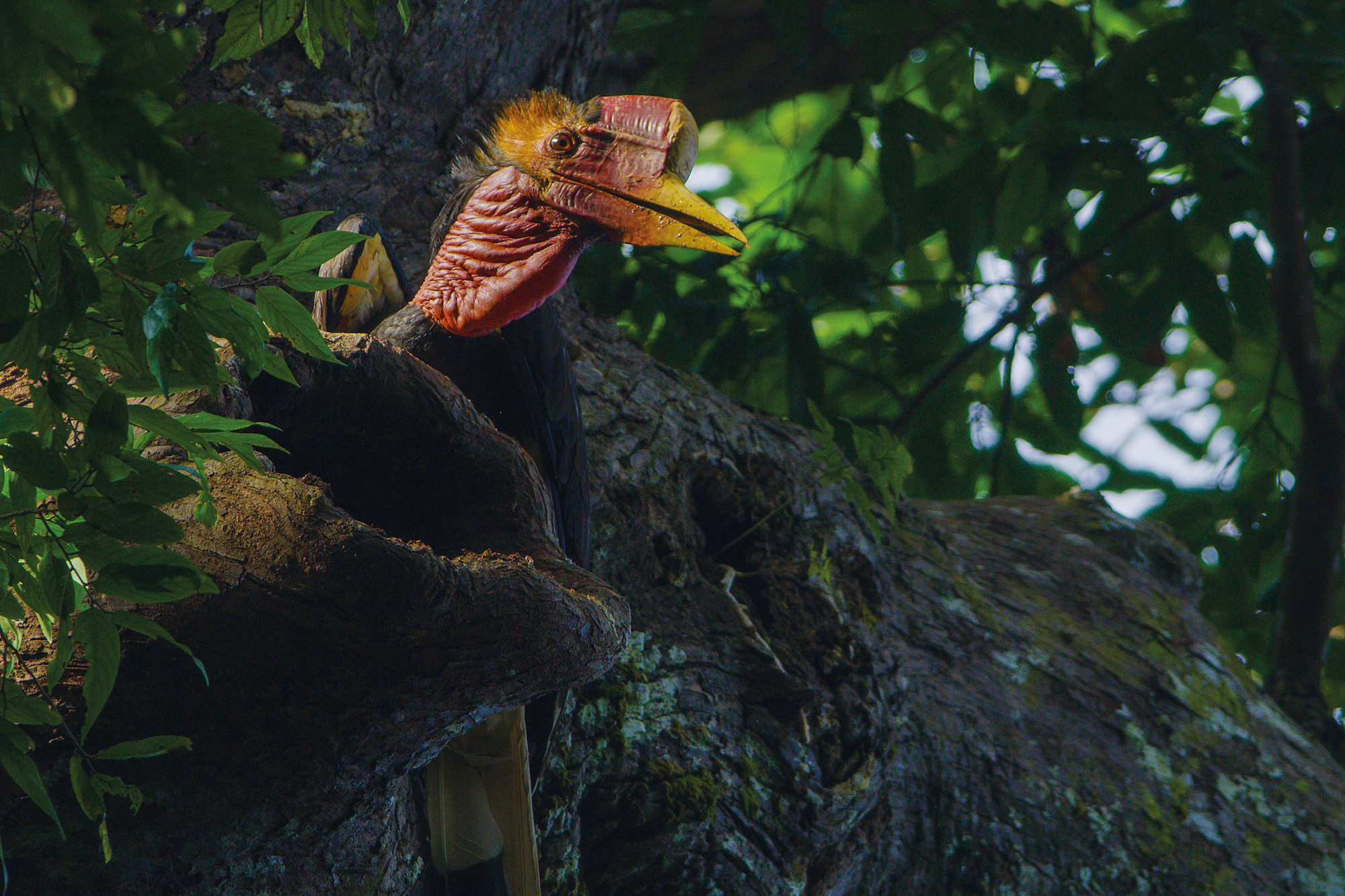 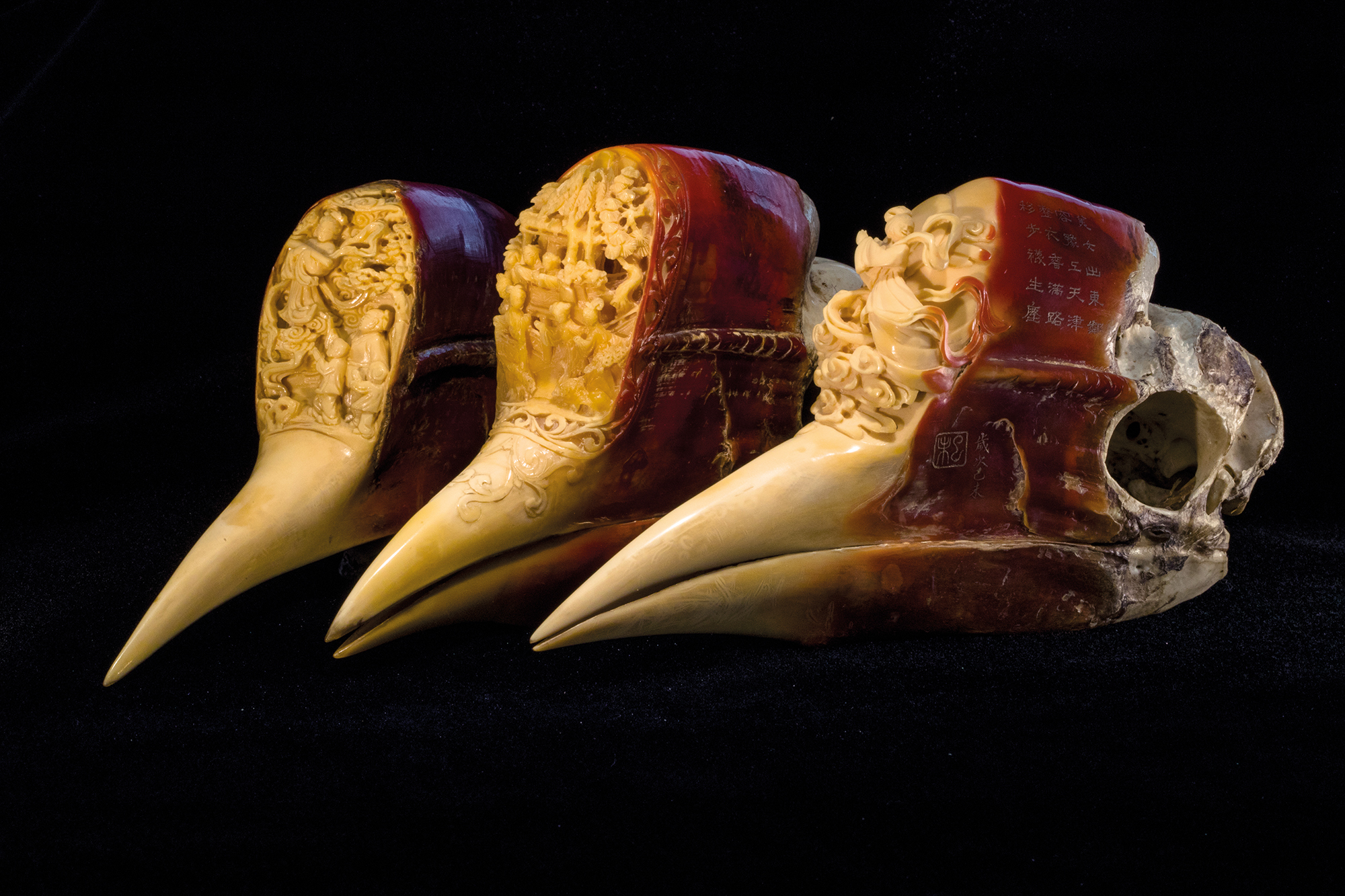 Helmeted hornbills are critically endangered, in large part due to the high demand for their unusual solid casques, especially in China. Known as “red ivory”, the casques are carved into luxury ornaments. International trade in the species has been banned since 1975, but to little effect. There has been a spike in trafficking in recent years, especially between Indonesia and Hong Kong, with increasing seizures by authorities. In the wild, the helmeted hornbill has a limited range, restricted mainly to old-growth rainforests on Peninsula Malaysia and the islands of Sumatra and Borneo. The birds need the large trees in these forests to build their nests. Forest destruction, especially to make way for oil palm plantations, is also playing a key role in their decline. (Images © Tim Laman) 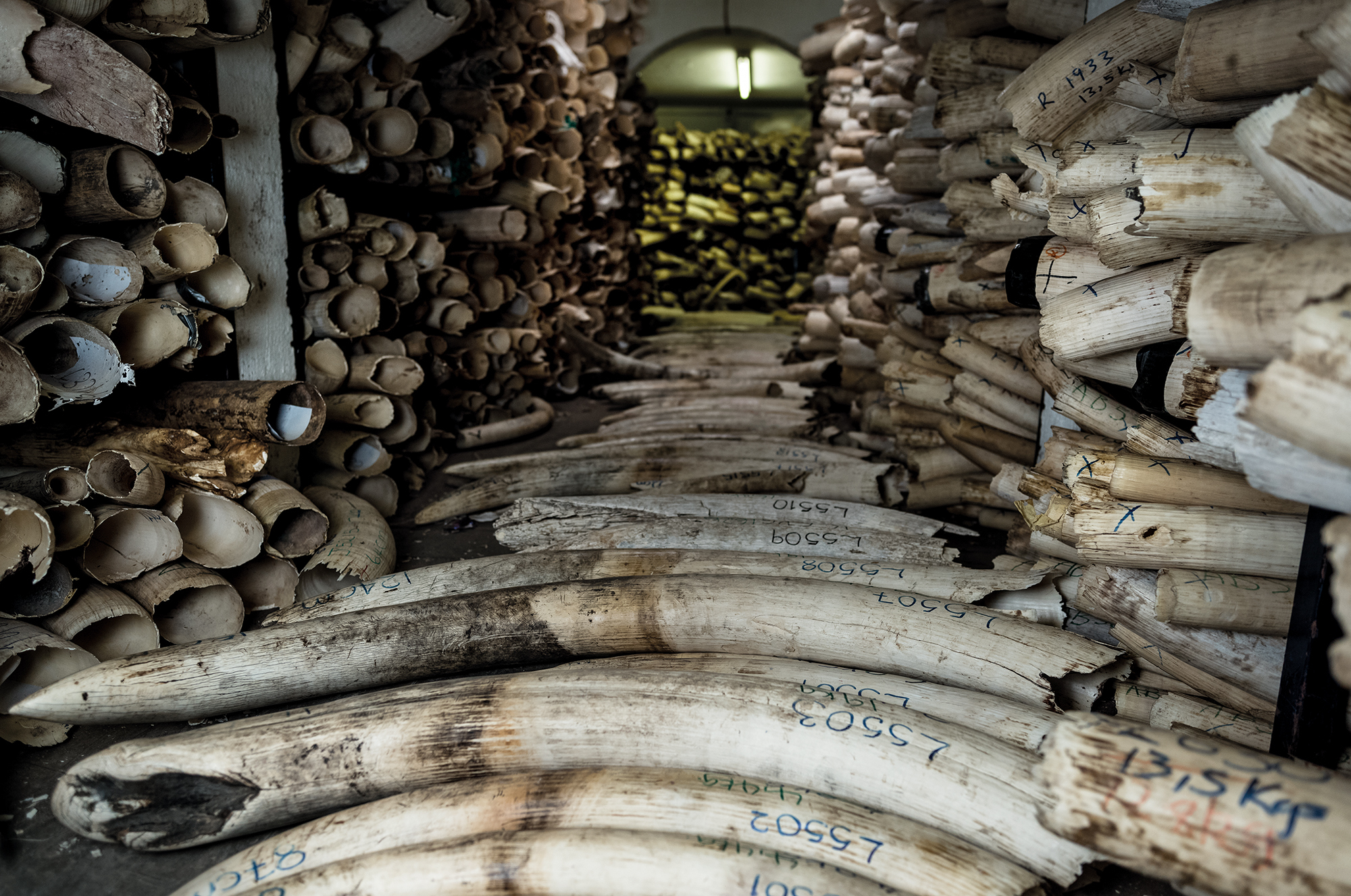 The vast stockpile of confiscated elephant tusks inside Zimbabwe’s ivory vault in Harare. In June 2019, the cash-strapped country called for the global ban on trade in ivory to be lifted so that it could sell these tusks, which have an estimated worth of US$300 million, arguing the money would fund conservation efforts for the next two decades. The proposal was rejected by the Convention on International Trade in Endangered Species (CITES) at its biennial conference in August, despite support from a handful of other African countries. CITES has allowed one-off sales in ivory in the past, and trade in tusks from some populations of elephants in Africa is controlled rather than illegal. China had long been the world’s biggest market for this legal ivory, but the country banned all trade in the material in 2018. Since then, there has been a marked shift in public attitudes and a fall in demand. Yet an illegal market still exists in China, fuelling a rise in smuggling, and ivory remains popular in some other Asian countries, such as Japan and Vietnam. According to WWF, 20,000 African elephants are killed every year to meet this continued demand. (Image © Adrian Steirn) 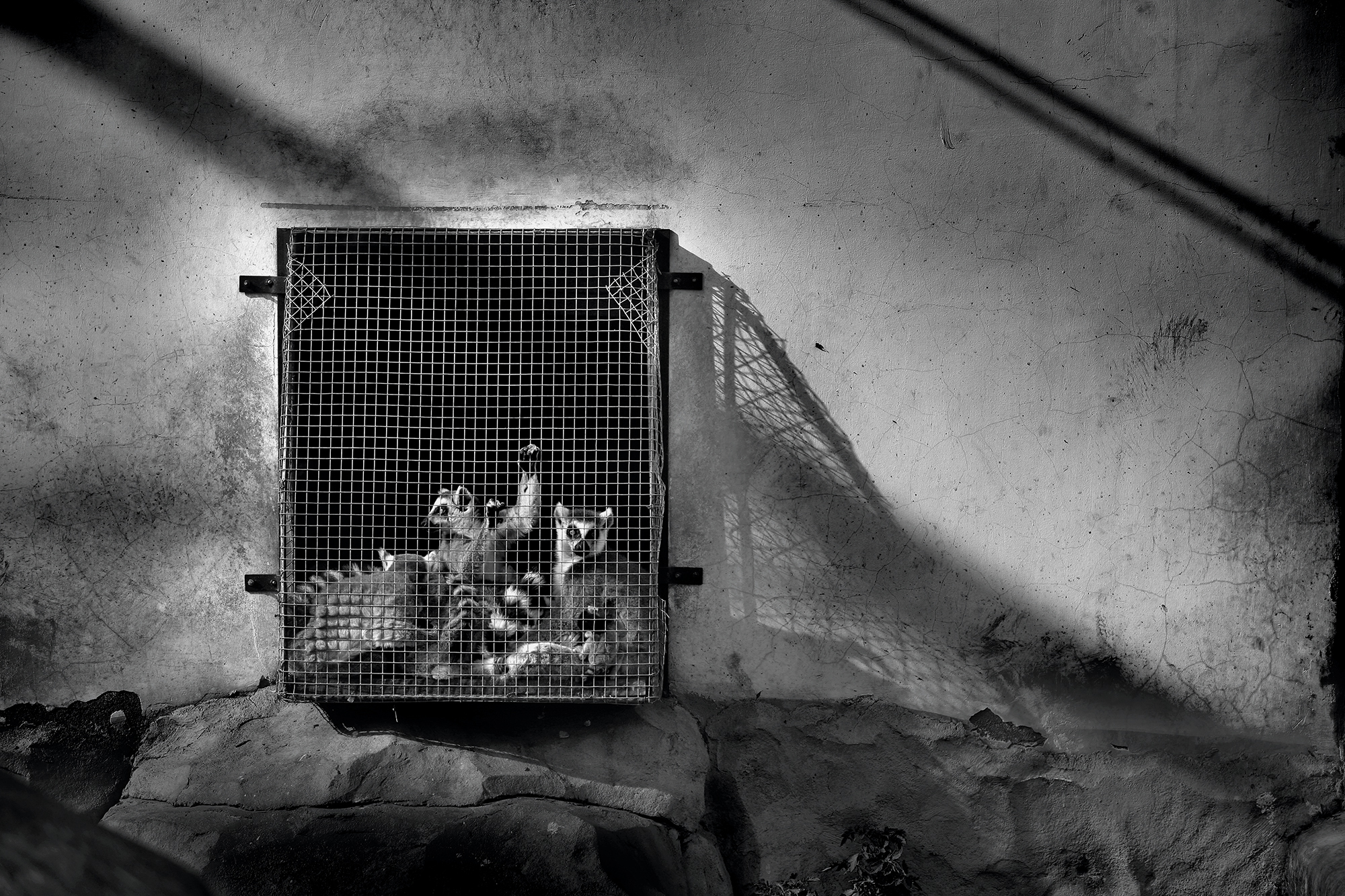 Endangered ring-railed lemurs in Wenzhou zoo in China’s Zhejiang province. This photo was taken in 2012, but conditions in many of China’s zoos, especially at the provincial level, remain poor, with animals housed in ageing concrete enclosures. Growing public awareness of animal welfare issues and the increasing wealth of consumers in China are, however, bringing some positive changes to the sector. New-style wildlife parks are placing a greater emphasis on imitating natural habitats for their animals, and this has prompted many urban zoos, especially in bigger cities like Beijing, to update their exhibits in an effort to keep up. (Image © Zheng Xiaoqun) 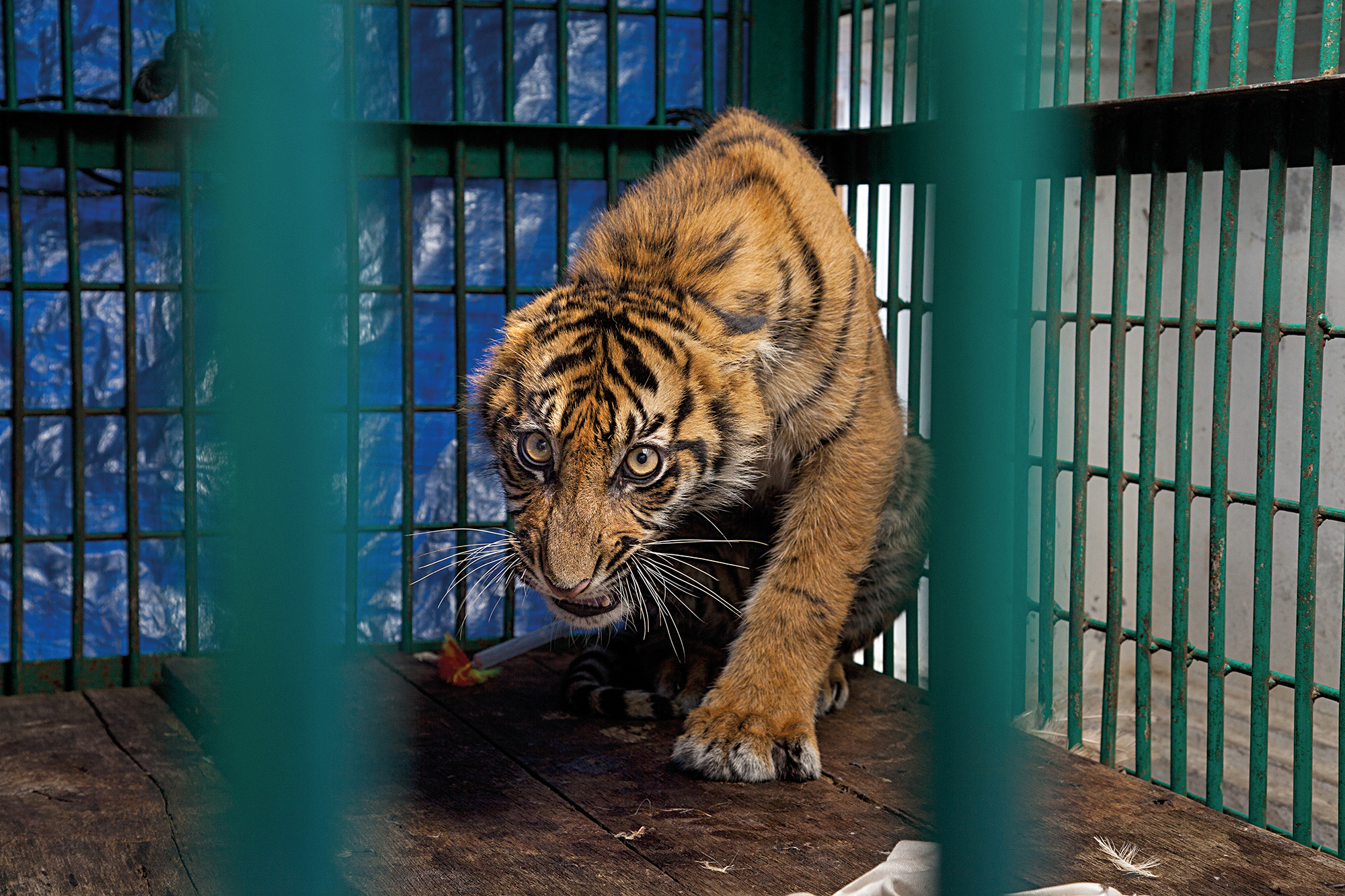 This six-month-old Sumatran tiger cub has had his right front leg amputated after being trapped for three days in a snare in Indonesia’s Aceh province. Unable to hunt, he was transferred to a zoo on the island of Java. Cheap and easy to make, snares are widely used across Southeast Asia. Set by poachers and local people to catch wild animals for food, or as a way to control what they consider to be pests, the snares kill indiscriminately. There are thought to be fewer than 4,000 tigers still left in the wild. (Image © Steve Winter) 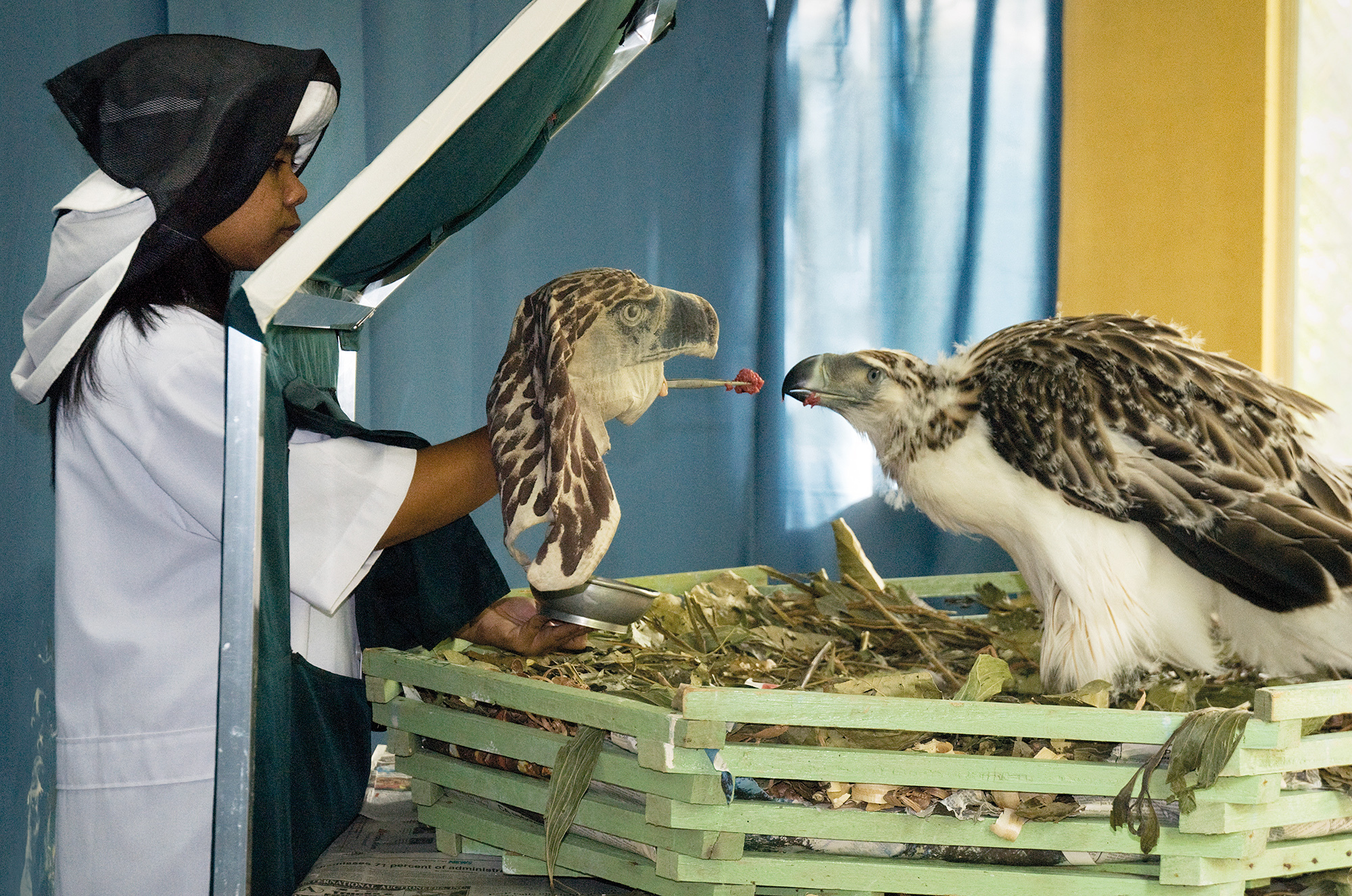 With an estimated 400 left in the wild, the Philippine eagle is critically endangered. Limited to only four Philippine islands, the giant raptors are threatened by deforestation and hunting. Efforts to conserve the species began as early as 1978, although captive breeding was not successful until 1992, with the birth of a female chick named Pag-asa (Hope). Since then, 28 of the birds have been successfully bred at the Philippine Eagle Center in Davao City; more than a dozen of these have been released back into the wild. To widen the geographic spread of conservation efforts, the centre last year sent a pair of eagles to the Singapore Wildlife Reserve for a 10-year breeding programme. (Image © Klaus Nigge)

Lizi Hesling is a managing editor with chinadialogue in London focusing on multimedia content. She formerly worked with Greenpeace East Asia in Beijing as their video producer and spent 12 years in China working in news and documentary. She recently completed an MA in Film Editing at Goldsmiths, University of London, and also holds an MA in History from Edinburgh University. 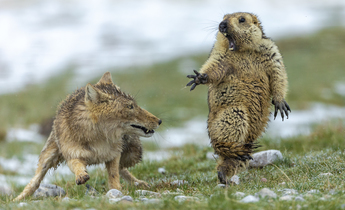 Bao Yongqing, recently named Wildlife Photographer of the Year, explains how he captured that perfect moment on the Qinghai-Tibetan Plateau 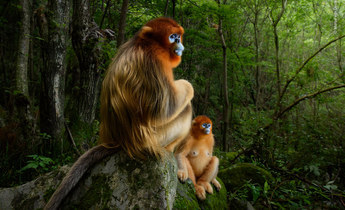 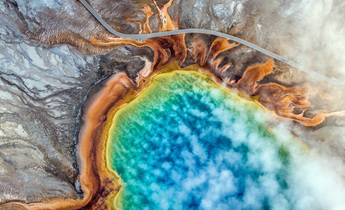